In the immortal words of Homer Simpson: D’oh!

Fox and Disney go head to head for the last time–that is, unless the sale is stopped by the Justice Department’s sith lords–as Disney’s “Star Wars: The Last Jedi” is set to obliterate Fox’s animated “Ferdinand.”

That’s the gist of what will happen domestically this weekend as “Star Wars: The Last Jedi” arrives in a very weak marketplace and is set to fire a box office kill shot that will eviscerate every film in its path.

Poor, “Ferdinand.” Fox is the only studio brave enough to even try to challenge the Force, but as it happens, Disney now owns Fox Studios, so it’s sort of a moot point now.

I wonder if Disney will have time to add the 20th Century Fox fanfare back to the opening of Star Wars? They should probably start prepping that, pronto, considering Disney will own everything from the X-Men to Avatar to Die Hard. Yippie-Kai-Yay, mother mousers!

The $4 billion the Mouse House paid for Lucasfilm is a bargain compared to what it will cost them to bring back X-Men and the Fantastic Four, but whatever they pay will be worth it considering there will now be crossover between X-Men and the Avengers. That type of synergy could easily catapult Marvel flicks past Star Wars in the near future.

Either way though—it’s all about Disney. Talk about a conglomerate for the ages.  Might as well scoop up Sony too while they’re at it, just to get Spidey back in the Marvel mix. God knows Disney even contemplating the purchase of the beleaguered Culver City studio would be the best thing to happen to them since Bond landed there years ago.

Think about this. The only other studio that can even compete with the Magic Kingdom right now is Warner Bros. Nobody else even has the firepower. Don’t believe me? Ask Universal how that Dark Universe is going. Oh, yeah, it imploded. After ONE movie.

Unfortunately, as evident from the fallout of “Justice League”—one of the biggest disappointments of the year—WB is sort of all over the map right now. “Wonder Woman,” “It,” and “Dunkirk” were massive hits for the company; however ,“Justice League” was supposed to be the icing on the cake, instead it turned out to be a cream pie to the face—an embarrassing end to an otherwise superlative year for WB.

Universal certainly has some box office appeal with their vast array of silly sequels—“Fast & Furious,” “Despicable Me,” and “Jurassic World.” However, the studio is the equivalent of a pop-up shop, striking while buzz is trending, yet constantly producing flimsy films that are instantly forgettable after theatergoers eyeball the next big, shiny neon light. Frills pay the bills…for now. That’s probably why Universal keeps making sequels—so you don’t forget they exist at all.

Lionsgate has been performing the best of the other three big entities, while Sony and Paramount are treading water in the midst of a cinematic tsunami. Both studios are in serious trouble right now in a landscape dominated by superheroes and continuing sagas. And they simply don’t have the arsenal to stay in the box office battle too much longer.  Not with what they have on their current release calendars.

Big changes are afoot, folks, but in the meantime, let’s all get out there and say our farewell to Disney’s latest, and perhaps greatest princess, Princess Leia.  This is Carrie Fisher’s swan song, and for many of us, a goodbye that is about as wanted as a Howard the Duck sequel.

This is a tough one. Really tough. Princess Leia was the only female action figure I owned as a child—probably because there weren’t many options—and Star Wars adventures were never complete without her as part of it.

Leia didn’t come packaged with a dustpan or an iron, she had a blaster just like all the other boys. She was an action figure. A true action hero, before women were even thought of consistently in those realms.  And now, in this series, she has been transformed into a diplomat, something that all true purveyors of peace should aspire to be.

Thank you for your service, Carrie Fisher–even if you were a bit bewildered by the barrage of attention, you gave hope in ways you probably never fully grasped.

May the force be with you…always.

What if you rolled up all of pop culture into one film? Yep, that’s what this is aiming for. Will Spielberg finally connect with a huge family audience again? This is his roll of quarters. Game on.

Looks like this will fare much better than “Valerian” or “Ghost in the Machine” did last year, as Robert Rodriguez delivers something familiar, yet distinctly different. Could be one of next summer’s big surprises. 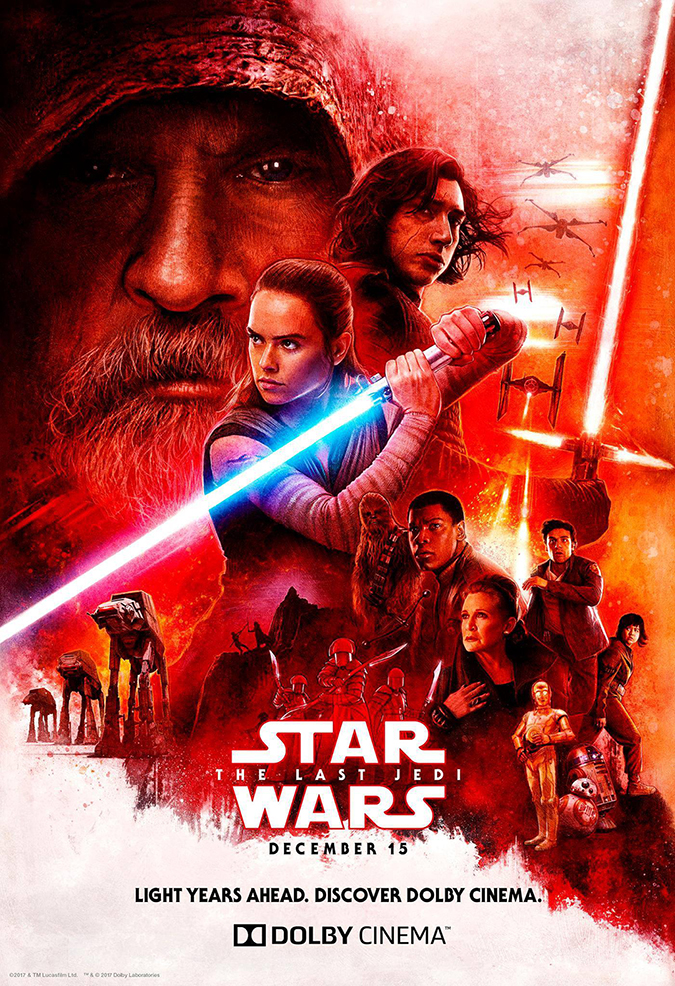