Labor Day weekend is often the forgotten stepchild of extended holiday weekends in Hollywood, which is fine, I suppose. I mean, even Tinseltown needs time off, but what if a studio dropped a big-time flick, like, say, a Marvel or big-time sequel? What a capper that would be, not to mention the clear sailing a film like that would have as it coasts into fall.

In 2017, studios barely even lifted a finger. Case in point: Spielberg’s “Close Encounters of the Third Kind” re-release was the top new film landing at #14 with $2.2M.

This year, four new prospects will make a little more noise, but it’s become embarrassingly clear that Hollywood needs a blockbuster ending, fitting of a summer season popping with big-screen entertainment of the highest CGI order.

Why is it that every year goes out with a whimper instead of a bang? You’d think a bookend—something to leave audiences wanting more—would be more appropriate, right?

So, what exactly is this rogue’s gallery of highest grossing films released over Labor Day? In a word: Horror. In two words: Horror shows.

If Warner Bros. wanted to make scary, mad money, they would have bumped up “The Nun” a week, just like Disney did with “Avengers: Infinity War,” to kick off the summer swelter this year.

In fact, I’d be shocked if they didn’t do it with “It: Chapter 2” next year. A free extended weekend for an already rabid fanbase. They’d make a killing. I mean, they already will, but might as well make a clean sweep of the gutters.

Lionsgate dishes out “Kin” this weekend, which on paper is an interesting sci-fi flick about a kid with a space-gun. Think “The Last Starfighter,” but instead of a ship, a pre-pubescent teen has a master blaster from another galaxy.

Possibly more fitting of a “Black Mirror” episode than a theatrical release, though, since the trailer is a scattershot effort that doesn’t quite sell itself to anyone. Is this for kids? Teens? Adults? Everyone? No one?

To top off the weirdness, Dennis Quaid, James Franco, and Zoe Kravitz make appearances in the film. Say whaaaaaat? Great cast, but pretty sure audiences will choose BBQs, camping and college football over this ramshackle, last-ditch effort from Lionsgate which is getting battered by critics anyway.

In 2,100+ launch points, expect “Kin” to shoot up a mediocre $5M. That’s especially bad when you consider Lionsgate paid upwards of $30M for the film.

Getting a jump on the festivities is MGM’s “Operation Finale,” which opened Wednesday and is getting decent reviews, but, like “Kin”—who exactly is this for?

Does anyone really want to see a Nazi witch hunt? The casting doesn’t juice up much excitement. Although Ben Kingsley and Oscar Isaac are solid, they aren’t necessarily charismatic leads.

On top of that, the title is so generic, audiences might even think it’s some kind of spy film parody. “Can I get my money back, I thought Mr. Bean was in this?”

In under 2,000 theaters, $6M would be a victory at this point for “Operation Finale,” which is directed by Chris Weitz (“The Golden Compass,” “About a Boy”)

Focus Features is still riding high with Spike Lee’s “Blackkklansman,” yet here they are rolling out their British thriller, “The Little Stranger.” While it nets a great cast—Domhnall Gleeson, Will Poulter, and Charlotte Rampling—it hasn’t been getting much marketing support. That said, this classic creepshow looks solid.

Knocking on 475 doors, “The Little Stranger” may ring up $2.5M with wicked tricks and treats this weekend.

The king of the box office ring will no doubt be “Crazy Rich Asians” again, for the third weekend in a row, but Sony’s “Searching,” starring John Cho—another Asian?!?—expands into 1,100+ screens this weekend and should lock down #2 with around $9M.

In its debut last weekend, in just 9 theaters, the online thriller scored a crazy-good $388k, $43k per theater. 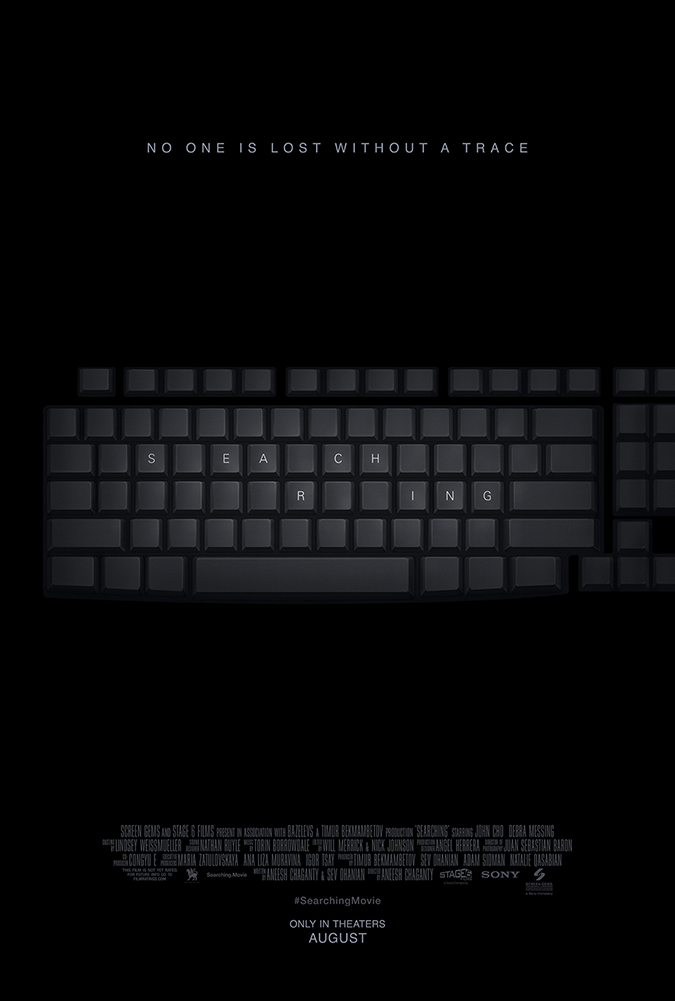