The Calm Before The Summer Storm… Meow

You see, this isn’t a studio—Fox Searchlight—trying to make a quick buck off audiences; this is fans of the original demanding a sequel and putting their money where their mouth is.

$4.4 million to be exact. That’s the amount raised by Broken Lizard teaming up with Fandango and launching their Indiegogo campaign back in 2015, which ended up going above and beyond the $2M they were asking for—in just over 24 hours, no less. That’s some serious pent-up demand for the continuing exploits of Broken Lizard’s bumbling state troopers.

Fox Searchlight paid $3.25M to distribute the original $1M film, picking it up at Sundance. With $23M worldwide and a considerable following on video and cable, it immediately reached cult status, and I think it was sort of assumed that this crew would become the next “Police Academy,” spinning off dozens of sequels, and eventually going full tilt against Steve Guttenberg and his wacky blue crew. Think of the mash-up potential. YouTube Red, are you listening?

That never happened, but with streaming entities like Hulu, Netflix, YouTube, Amazon, Apple and Crackle—is Crackle still a thing?—all looking for content to attract ardent, die-hard fans, Broken Lizard’s lo-fi humor might be just the ticket, as they have a track record and proven they can deliver at a bargain-basement price.

But back to the story at hand. After the success of 2002’s “Super Troopers,” director Jay Chandrasekhar and company took their golden ticket and went to “Club Dread,” which was a massive box office misfire, and pretty much forced Fox Searchlight to swipe the welcome mat out from under their feet.

Yes, two years after “Super Troopers,” “Club Dread,” their absurdist horror/comedy, belly flopped in theaters, even though it was budgeted at less than $10M. With the combination of marketing and effort, $7.5M globally was not going to cut it.

And then, they sold out. Sort of. Chandrasekhar directed “Dukes of Hazzard,” which starred Sean William Scott—who also appears in “Super Troopers 2”—and Johnny Knoxville and went on to dust up $111M worldwide on a $50M budget.

While it didn’t deliver a theatrical franchise, I suppose that was enough to convince Warner Bros. to spend $17M on Broken Lizard’s “Beerfest,” which, while attracting their burgeoning cult crowd, was still only able to cash in with $20M worldwide.

How “Beerfest” didn’t get played in conjunction with beer fests around the world is beyond me, but again, traction for this film has built up steadily, and like most of Broken Lizard’s offerings, they get better with age—like a fine, stinky piece of cheese.

With Friday falling on 4/20 this year, it’s time to smoke ‘em if ya got ‘em, and the Broken Lizard ensemble, who minutely disrupted the Hollywood scene 16 years ago dropping the original “Super Troopers,” is giving the fans what they want in 2,000+ theaters, and possibly, going back to the well that sprung life into their collective acting careers.

Most notably, for Chandrasekhar, who has been spending most of his time directing TV for the last decade and occasionally popping up on the boobtube, this will be a good heat check for his signature brand of humor.

It’s not like this is “Blues Brothers,” and nearly twenty years later an attempt at cashing in on the legacy it made like “Blues Brothers 2000” was.  Or “Caddyshack,” for that matter, with its ill-fated follow-up eight years after, featuring none of National Lampoon’s freshness of the original.

That’s the key for comedy sequels, most of which don’t work, since capturing lighting in a bottle is a hundred times harder when you’re attempting to recreate it instead of just holstering it.

Sure, it can work at times: “Anchorman 2,” “The Hangover II,” and more recently “Daddy’s Home 2,” and “Bad Moms Christmas.” However, for every one one of those films, there’s a three others that can’t squeeze out any more cine-magic: “The Hangover III,” “Crocodile Dundee in Los Angeles,” “Revenge of the Nerds II,” “Zoolander 2,” “Wayne’s World 2,” “Hot Tub Time Machine 2,” and the list goes on and on and on.

For better or worse, “Super Troopers 2” is a sequel that was built up by legitimate grassroots fans of the original, and it will be up to those same supporters to make sure the adventures continue…although that probably won’t be in theaters.

Expect a debut of $5M or so, which certainly doesn’t seem like a lot, but it’s a sizeable win for fandom. If they pay for it, they will come. Power to the people!

The real winner at the box office this weekend, outside of “The Quiet Place” and “Rampage” lurking about, will be Amy Schumer’s latest, “I Feel Pretty.”

STX’s film is Schumer’s first PG-13 pic, which should help boost her street cred with teens, most of whom have probably already seen “Trainwreck” and “Snatched.”

It’s not often that an entertainer’s first film—”Trainwreck”—busts out of the gate with $100M+ domestic, but it’s also nice to have a comedy legend, Judd Apatow, at the helm of your $35M film, which went on to gross $140M globally.

What happened with WB’s “Snatched”—which grossed just $45M in North America, equaling its budget—was a classic Hollywood case of trying to strike while the iron is hot without taking the time or effort to learn why “Trainwreck” worked so well.

First off, “Trainwreck” was straight from the heart—Schumer wrote the script and it felt like an extension of her wildly successful sketch show on Comedy Central. “Snatched” was none of those things. It was more of a welcome back Goldie Hawn moment, which felt like more of a PR spin than anything else.

With “I Feel Pretty,” Schumer teams up with the writing duo of Abby Kahn and Marc Silverstein—making their collective directorial debut—who are probably known best for penning “Never Been Kissed,” “He’s Just Not That Into You,” and “How to be Single.” In other words: these are her people.

In 3,400+ theaters, expect “I Feel Pretty” to reconnect with the “Trainwreck” audience and possibly flirt with $20M this weekend, if it truly connects with women. Tracking has been pretty low for the $32M title—$13M-15M—which was also true of STX’s other female-fronted comedy, “Bad Moms.” That underdog story went on to open with $23M on its way to a sizable $183M worldwide.

No wonder they sequelized that so quickly, and even tried to franchise it announcing “Bad Dads” right after. Luckily, STX went with “A Bad Moms Christmas” instead, which spread $130M of holiday cheer worldwide.

It’s possible that because of the underperformance of “Snatched,” insiders are underestimating Schumer’s drawing power. However, after all the boys-and-their-toys offerings, sometimes known as dick-flicks—“Rampage,” “Ready Player One,” “Pacific Rim: Uprising”—“I Feel Pretty” may just be a case of the right chick-flick at the right time.

And then we have Lionsgate’s “Traffik,” which is the kind of film that would force you to have to make a really tough decision at Redbox before parting with your hard earned $1.75—yes, rates went up.

But seriously, who’s renting tactile discs these days? Probably the same insane people who carry cash around in their wallets and hold up lines looking for the right combination of bills and counting out change—sooooo disrespectful of our precious time.

And let’s not forget: Ew. So gross, I can’t even—all that dirty money touched by all those people who probably never wash or sanitize their hands.  Thank god for the fist bump, good riddance hand shake! How is it we’re all alive in 2018?

Social indiscretions aside, in 1,000+ theaters—which is really low, even for Lionsgate—expect around $4M for the Paula Patton, Omar Epps thriller. The R-rated flick is written and directed by Deon Taylor, of “Meet the Blacks” fame. Or semi-fame. Or whatever that was. Hey, it made $9M on a budget less than $1M. That’s something. Oh, and there’s a sequel in the works.

And, hey, we all know—Super Troopers included—you aren’t anyone in this day and age until you sequelize.

Wait…Jodie Foster is in this? Jeff Gloldblum? This is coming out in movie theaters? What the hell is going on here? A hospital for criminals run by insane people? Hmmm. Perhaps.

Suck on this chimichanga. They saved the best trailer for last. 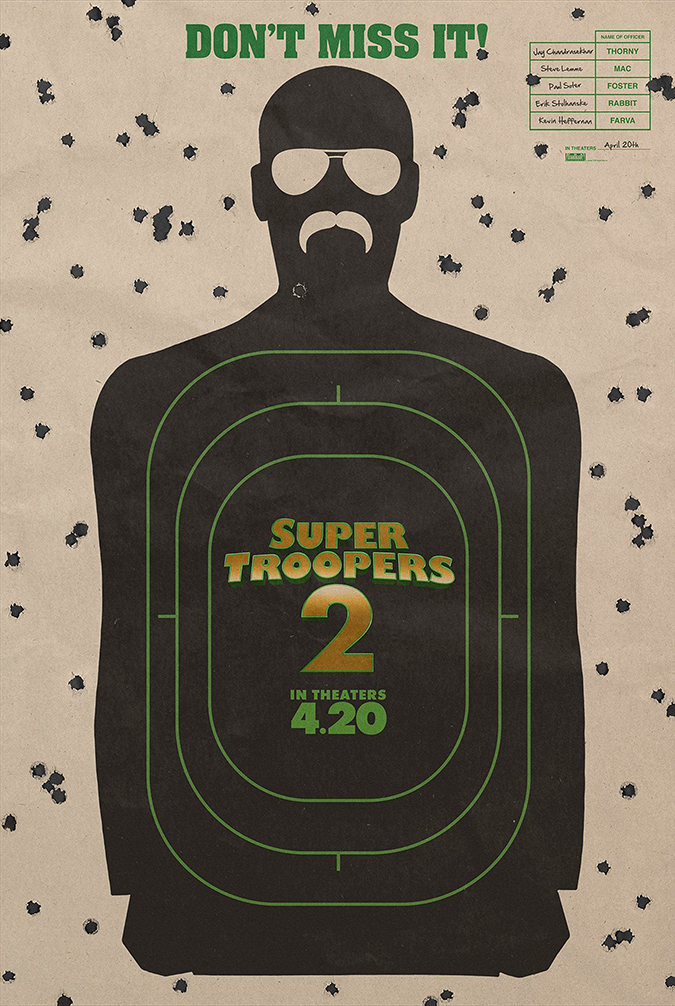