“Hidden Figures” is making its mark at the box office, having ruled the roost the last two weekends, and now sits at $64M domestic, with a possible Best Picture nomination on the horizon.

Fox’s uplifting, based-on-a-true-story film reminds me of another inspiring tale that took the box office and awards circuit by storm, 2009’s “The Blind Side.”

Warner Bros’ football drama, which also cost under $30M, ended up with a Best Picture nomination and an Oscar for star Sandra Bullock, as it went on to $255M domestic and over $300M worldwide.

Let’s just get this out of the way: Shyamalan, as a director, hasn’t opened a film under $25M since 2006’s “Lady in the Water,” and in fact, that’s the only film of his career not to reach that mark.  So whatever you may think about “The Last Airbender,” or “After Earth,” or him as a brand name, audiences still eat him up.

His return to micro-budget macabre, 2015’s “The Visit,” was a critical and financial success; made for just $5M, it grossed nearly $100M worldwide.

Shyamalan’s latest, with an audience-friendly PG-13 rating, is also budgeted at $5M through Blumhouse Productions, and features a virtuoso performance from the vastly underrated James McAvoy.

Sneaking into 3,000+ venues, “Split” might just crack open the floodgates with close to $30M.

Paramount wants franchises in the most desperate way; how else do you explain spending upwards of $100M on a series that saw its last incarnation—with Ice Cube subbing for Diesel—score just $71M worldwide?  Usually, that’s a backbreaker for a franchise–certainly Sony was finished with it. There goes Paramount…dumpster diving development team in full effect.

Paramount’s threequel is no doubt a return to the core of the character, as it’s titled “Reactivated” in some markets, and hopes to have a storied Hollywood ending (or is it another ominous beginning?) just like when Diesel returned to the “Fast & Furious” series and jump started it in a major way.

Part 3’s supporting cast is impressive with Donnie Yen, Tony Jaa, Toni Collette, Samuel L. Jackson, and even Ice Cube popping up in trailers. Let’s face it though; Paramount can’t afford to leave Cube’s appearance as an Easter egg. They’re going for broke here, as evident by the $85M budget, and allegedly working Diesel hard for another sequel commitment.

What it really boils down to is whether or not audiences can wait another three months for the Diesel they really crave: Dominic Toretto. His return is eminent as  “The Fate of the Furious”  will take the pole position at the worldwide box office on April 14th.

“The Founder” was supposed to be Oscar fodder for Keaton, but seems Weinstein cooled on that notion as it didn’t get a late-December release, and instead is backing “Lion”—deservedly so—as their Awards’ beast.

Unfortunately, Weinstein didn’t partner with McDonald’s for this true life adaptation of the Golden Arches’ origin, so you won’t find any Ray Kroc figures in your Happy Meal anytime soon; however, if you’re a fan of Keaton, this is still a must see. Might do $4M in 1,100+ joints.

So, who will go see “The Resurrection of Gavin Stone?” Poking fun, even a wee bit, at Christians and their faith is a tough way to entice them, that’s for sure. And a PG-comedy is just too vanilla these days to attract hipsters.

The Daddy/Daughter film has come a looooooong way. Now we see the real scope of this superhero film, which is down and dirty and devoid of spandex of any kind.

Universal is in hot water…and so are the filmmakers of “A Dog’s Purpose.” TMZ posted this footage earlier this week and the internet is livid, enraged in fact. FYI–You don’t mess with the internets and you most certainly NEVER mess with dogs.

I mean, dating your own step-daughter is one thing (am I right, Woody?) as people can look past certain things…but animal cruelty might as well be one of the seven deadly sins. Ask Michael Vick about this.

PETA has already condemned the film, asking dog owners and everyone else to boycott Universal’s film which opens next Friday.

Can’t wait to hear Universal’s response to this, as cameras were most certainly rolling and everyone on the crew was watching this go down. So, the question is: Who leaked this? Why did it stay hidden for so long?

See, there’s this thing called “dailies” in the movie industry…where all the “powers-that-be” watch all the raw footage that evening, hours after it’s been shot, so they know if they filmed exactly what they needed.  So, the real down and dirty question is: who on the production team and in the studio had seen this footage before the whistle blew on them this week? That’s gonna bite them. Hard.

The fact is, this type of animal cruelty goes against everything the film is supposed to be about…which is why Josh Gad, the narrator of “A Dog’s Purpose,” threw the film under the bus on Twitter. 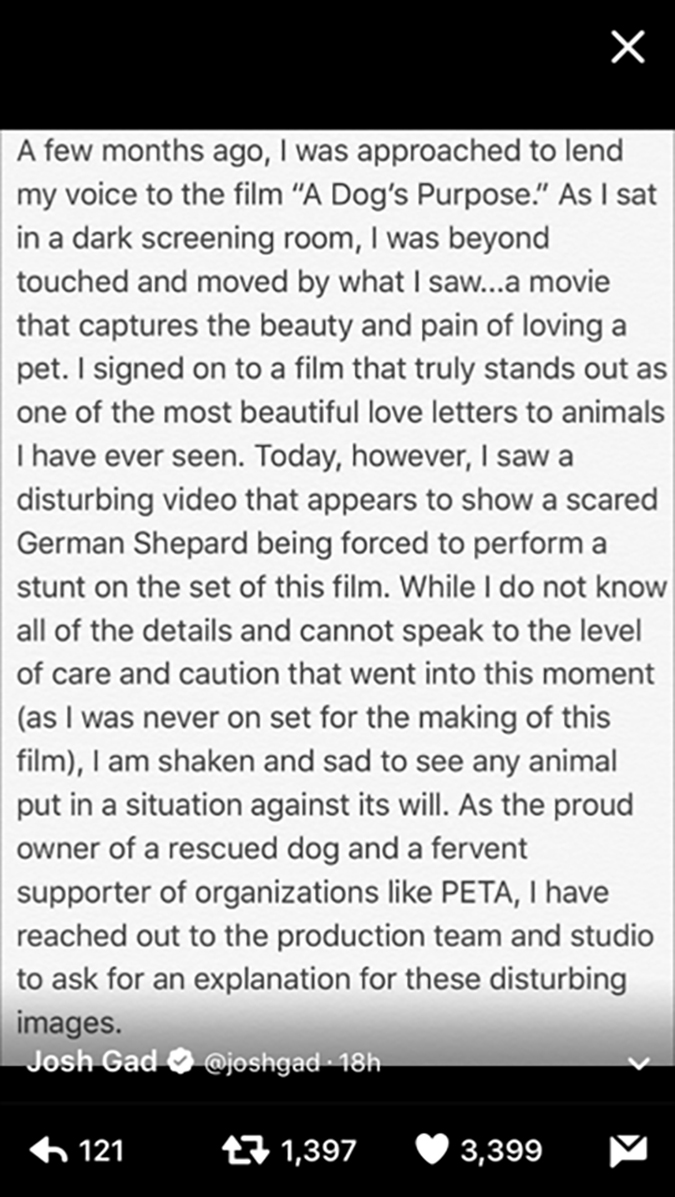 The film was tracking to be a pretty sizable hit as the family audience is starving for quality entertainment right now. How else can you quantify “Monster Trucks” opening with almost $11M? It will be very interesting to see the aftermath this type of story has on the box office bottom line and the filmmakers involved.