With all of Hollywood abuzz, basking in the golden light that shines on Tinseltown when the Academy Award nominations are announced, it’s easy to forget the industry marches on. That said, in a year’s time audiences will likely have a difficult time remembering the three new entries–“A Dog’s Purpose,” “Resident Evil: The Final Chapter,” and “Gold”–that arrive in multiplexes on this blustery cold winter weekend.

The awards heat will certainly boost many of the Best Picture contenders, none more so than Lionsgate’s “La La Land,” which now shares an Oscar record with “Titanic” and “All About Eve,” garnering 14 nominations.

In fact, Lionsgate instantly transformed from YA wasteland to Best Picture wonderland as the studio has three films nominated for the top prize: “Hacksaw Ridge,” “La La Land,” and “Hell or High Water.”

With 24 nominations total, the beleaguered studio is suddenly the belle of the Oscar ball this season, eclipsing the combined nominations of Disney, Universal, WB, Fox, and Sony, which totaled 18.

Paramount was the top winner of the Big 6 studios with 18 nominations themselves, including two for Best Picture: “Fences” and “Arrival.” The biggest loser was Universal, which has just one nomination: “Hail, Caesar” for best Production Design.

So will there be any box office bumps? Most assuredly. With “La La Land” and “Hidden Figures” in full stride right now, they will both blow past $100M+ and close to $150M when all is said and done–especially “La La Land,” if it ends up sweeping the Oscars like it did the Golden Globes.

So who takes home the ultimate Golden Boy? If not “La La Land,” which film? I’d put my money on “Hidden Figures,” “Lion,” and “Moonlight.” However, when “Titanic” and “All About Eve” were also nominated with a record-breaking 14 nods, both ended up winning the coveted Best Picture. So the odds are forever in Lionsgate’s favor.

A24’s “Moonlight” and Weinstein’s “Lion” have the most traction to gain as they both have seen limited box office success with around $16M each, so expect a big push from both of their respective studios over the next month.

“Lion” is the more commercial of the two films, and should see a major box office boost, deservedly so. It’s my favorite film of the year, and it’s not even close in my opinion. Sorry, “La La Land.”

Hollywood has already patted themselves on the back with “The Artist,” “Argo,” and most recently, “Birdman,” so it would be nice to see them go a different direction. No doubt “La La Land” is really good, but I have my doubts that it will be remembered as a truly great film in decades to follow.

It’s certainly the populous choice, which to me, highlights just how vanilla it really is.  Director Damien Chazelle’s previous film, “Whiplash,” is much more poignant and gripping in terms of artistic achievement.

The biggest story concerning the new films this weekend is probably PETA’s fierce boycott of Universal’s “A Dog’s Purpose,” which lifted its leg on the film as leaked footage revealed animal abuse on the set.  Not sure how much this will affect the box office, but family films are much needed in the marketplace right now, and this was/is expected to fill that void.

One of the producers and the screenwriter have now publicly apologized for the occurrence and have tried to make the mistreatment as apparent as possible. Usually in society when you admit to wrongdoing, face the issues head-on, and apologize…all is eventually forgiven.  We’ll see what happens this weekend.

Honestly, in 2,900+ theaters, it probably would have made up to $25M without the controversy– now, who knows, maybe $20M or so; it’s really difficult to gauge, as public sentiment sways radically with issues of animal abuse.

Abusing corrupt corporations and mutant spawn, however, are always welcomed, and that brings us to Sony’s video game conclusion, “Resident Evil: The Final Chapter.”

The most successful video game franchise of all time is set to conclude after already injecting $915M worth of cold hard cash into theaters. The sixth in the series, “The Final Chapter” will bring that total to over $1B, as the last two installments “Afterlife” and “Retribution” scored $296M and $240M, respectively.

In 3,000+ theaters expect upwards of $20M, although with M. Night’s “Split” swiping a massive $40M last weekend, his film will no doubt bleed money straight from the main vein of “Resident Evil.”

Will this really be the last we see of “Resident Evil?” Well, remember that Part 4 of “Friday the 13th” was called “The Final Chapter” and Part 5 of “A Nightmare on Elm Street” was called “Freddy’s Dead: The Final Nightmare.” And those series just kept killing it, barely taking a breather, in fact.

Oh yeah, and the last time we happened upon Jigsaw in the “Saw” franchise it was called “Saw 3D” and advertised as “The Final Chapter” on the poster. Guess what? A new “Saw” is being fired up this Halloween. So, you do the math, horror gurus.

No matter what kind of fuzzy math you subscribe to, it won’t save Weinstein’s latest failed Oscar bait film, “Gold.” The R-rated drama failed to score a single nomination, and will be unceremoniously dumped into theaters this weekend, just like Weinstein did with Michael Keaton’s “The Founder” last weekend, as it debuted with a tick less than $4M.

With audiences rushing out to catch up on all the Oscar nominated dramas out there, no doubt they will likely skip this Matthew McConaughey starrer, even though the Oscar pedigree is there, as it’s directed by “Traffic” and “Syriana” scribe, Stephen Gaghan.

AND THE NOMINEES FOR THE 89th ANNUAL ACADEMY AWARD ARE:

“Manchester by the Sea” Roadside Attractions

Casey Affleck, “Manchester by the Sea”

Lucas Hedges, “Manchester by the Sea”

Michelle Williams, “Manchester by the Sea”

“Manchester by the Sea,” Kenneth Lonergan

“Kubo and the Two Strings,” Travis Knight and Arianne Sutner

“My Life as a Zucchini,” Claude Barras and Max Karli

“Manchester by the Sea,” Kenneth Lonergan

“I Am Not Your Negro,” Raoul Peck, Remi Grellety, and Hebert Peck

“O.J.: Made in America,” Ezra Edelman and Caroline Waterlow

“Land of Mine,” Denmark

“Fantastic Beasts and Where to Find Them,” Stuart Craig, Anna Pinnock

“The Empty Chair,” “Jim: The James Foley Story” — Music and Lyric by J. Ralph and Sting

“Fantastic Beasts and Where to Find Them,” Colleen Atwood

Poster Image (A Dog’s Purpose) Courtesy of Universal, Poster Design by Leroy and Rose and Ignition 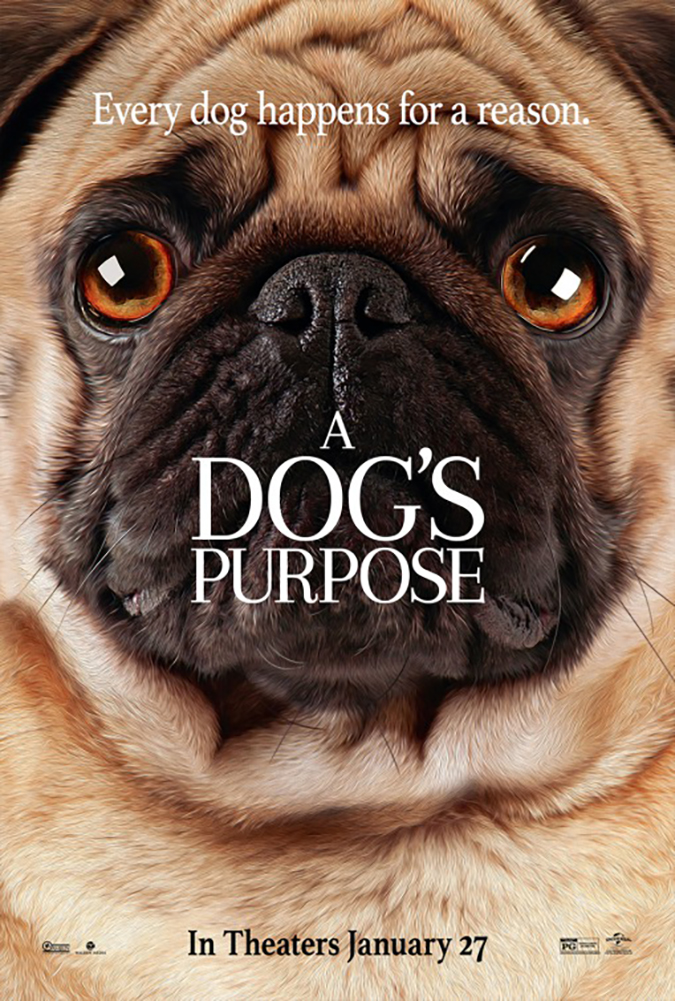