Black Friday deals are long gone, Small Business Saturday has been shuttered and Cyber Monday’s once-overwhelming buzz is now a dull hum. That all adds up to one thing in the cinema world: box office leftovers.

The guiding star of the holiday season, “Star Wars: The Last Jedi,” is waiting in the wings yet still two weeks away, and after a long Thanksgiving holiday, studios are in hibernation until mid-December. Only one wide release is scheduled during the next couple weeks — next weekend’s Broad Green’s “Just Getting Started”—so it’s time to spotlight indie flicks with aspirations of awards glory, as some debut, while others expand.

Opening in exclusive release this Friday is a trio of formidable talent including: James Franco’s “The Disaster Artist,” Woody Allen’s “Wonder Wheel,” and Guillermo Del Toro’s “The Shape of Water.”

While Woody’s latest looks like another minor character in his cinematic oeuvre, Franco’s “The Disaster Artist” and Del Toro’s “The Shape of Water” may just turn out to be indie box office behemoths, as both look to slay cinematic giants and go toe-to-toe with the big budget flicks of the holiday season.

That also means Fox Searchlight’s “Three Billboards Outside Ebbing Missouri,” A24’s “Lady Bird,” and Sony Classics’ “Call Me By Your Name” will have some room to breathe and expand beyond large metropolitan markets, while “Coco,” “Justice League,” and “Wonder” continue to win, place and show.

Del Toro hasn’t had this much indie buzz on a film since 2006’s “Pan’s Labyrinth,” and while that film was a critical and box office success with $37M domestic and $83M worldwide, much more is expected from “The Shape of Water,” as insiders have his latest, a horror-love story, pegged for a scary big box office run and a real chance to scale the awards circuit.

Nothing fishy about what del Toro offers here—love, mystery and adventure…packaged in chill pill form. That’s when he’s at his best, and with just a $19M budget, this is going to be a big win for Fox Searchlight, which, despite having one of the more aggressive indie slates, hasn’t had a film gross over $25M this year.

Marc Webb’s “Gifted,” released in April, is Fox Searchlight’s top earner of 2017 with $24M. However, “Three Billboards” is well on its way to box office redemption, announcing itself in the Top 10 last weekend and finally showcasing itself in moderate wide release this past weekend with $4.4M, $7.6M total.

Franco’s “The Disaster Artist” is an adaption of Greg Sestero’s memoir based on the neo-classic cult film, “The Room.” While it may be called the “Citizen Kane” of shitty movies, if you haven’t watched it yet, seek out this gem before attempting to watch A24’s gonzo greatness. In fact, I would hope the indie outlet plays “The Room” and “The Disaster Artist” as a double feature to get the full effect.

Woody always culls together a phenomenal cast, and this go-round is no different: Kate Winslet, Justin Timberlake, Juno Temple, Jim Belushi, and Debi Mazar. Reviews haven’t been kind, however, and when that happens to one of Woody’s flicks, it’s usually fitted with box office cement shoes.

All the heroes. All the fighting. You thought Mayweather vs. McGregor was big–you ain’t seen nothin’ yet! This should have been titled “Avengers: Battle Royale.”

Lead-In Image (“The Disaster Artist” Movie Poster) Courtesy of A24; Poster Design by P + A 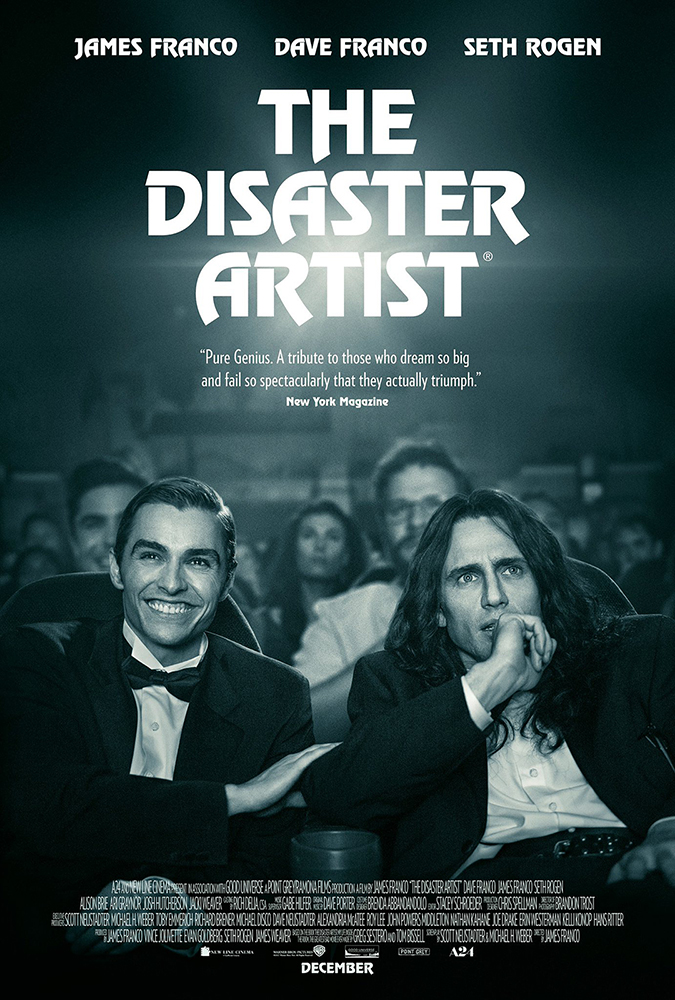