That’s about the size of it, the Megalodon, that is. The prehistoric shark was one of the largest ocean predators of all time.  However, if Warner Bros. is going to have any luck topping the biggest box office bite of all time, their massive shark will have to shred tickets on a massive scale to measure up to $1.18B domestic.

Spielberg’s “Jaws,” released in June 1975, was a worldwide smash, earning a record breaking $260M ($1.18B adjusted)  in North America alone and another $210M overseas. It also helped usher in a new wave of blockbuster filmmaking as fans started to become fanatical over certain franchises that went far beyond just the four walls of theaters.

While Universal has had resounding success with the reboot of “Jurassic Park,” it’s been over thirty years since they’ve resurfaced the Jaws franchise, the last being “Jaws: The Revenge” in 1987.

While waning grosses were definitely a factor, for a studio that specializes in sequels and desperately wants a Dark Universe, another Jaws film would seem like a no-brainer. It’s quite possible that Spielberg may have a say in this, although he certainly didn’t stop Universal from making three underwhelming sequels in the span of 12 years after his original.

That brings us to Warner’s “The Meg.” The $150M horror flick on the high seas surfaces in 3,900+ theaters and is generally expected to swim toe to toe with Tom Cruise’s “Mission: Impossible – Fallout” for the top spot.

While $20M-$25M certainly isn’t a typical blockbuster opening domestically, all eyes are on China–where it also debuts this weekend–and international markets for this one as there’s heavy foreign investment, not to mention an infusion of Chinese talent.

If “The Meg” can over perform in North America–as both “47 Meters Down” ($44M) and “The Shallows” ($55M) have done recently, albeit on a much smaller scale budget, Universal may be inclined to rethink their reboot strategy with “Jaws.”

With the continued popularity of Discovery Channel’s Shark Week and the vast array of “Sharknado” flicks, the appetite is certainly there to make a killing.

So, could it blow past $20M? Quite possibly. Warner’s “Deep Blue Sea” shot out to $19M ($34M adjusted) in 1999, and director Jon Turteltaub is no stranger to blockbuster filmmaking, churning out “National Treasure” and its sequel among his other audience-friendly hits like “Phenomenon” and “While You Were Sleeping.”

Whether or not “The Meg,” which is PG-13, can capitalize on its prehistoric predecessors is another question, however, WB is certainly playing up both sides with their trailers–the action and the kitsch factors in full effect.

An IP like Jaws, though? If Universal could capture the nostalgia factor like they did with “Jurassic World,” add a dash of Richard Dreyfus, they could easily catch a massive haul. That said, it has to be done right. But with Universal’s propensity for sequels, this should really be in production already.

And then we have Sony’s “Slender Man,” which, by all accounts, the studio has done an atrocious job of marketing, as they failed to include a trailer in their CinemaCon showcase earlier this spring, where studios and exhibitors meet in Las Vegas to do their annual dog and pony show. Unheard of.

Fact is, horror has been mostly ignored this summer by studios, with “Hereditary” and “The First Purge” subbing in for an audience that is likely ravenous by now. Should have made “Slender Man” a huge ticket, but advertising has been as scarce as the man himself–almost non-existent, in fact.

Does this mean Sony knows it has a misfire on its hands, or is all part of the master plan to keep it on the down low? We’ll find out, but debuting on just 2,000+ screens isn’t a sign of confidence, that’s for sure. May be slim pickings–$10M-$13M.

Hoping to capitalize on the dog days of summer,  LD Entertainment drops “Dog Days.” We already saw what a dog pic can do in the summer back in May when Global Road’s “Show Dogs” rolled out with just $6M in 3,200+ doghouses, and finished with just $17M.

“Dog Days” debuts in 1,000 fewer theaters than “Show Dogs” and may lift its leg on $4M or so this weekend. The PG pic stars a host of notables, but like they say in Hollywood, if you act with animals, you always play second fiddle. Vanessa Hudgens, Finn Wolfhard, and Eva Longoria may have their names on the poster…but their heads are cut off. Literally. Truth in advertising. 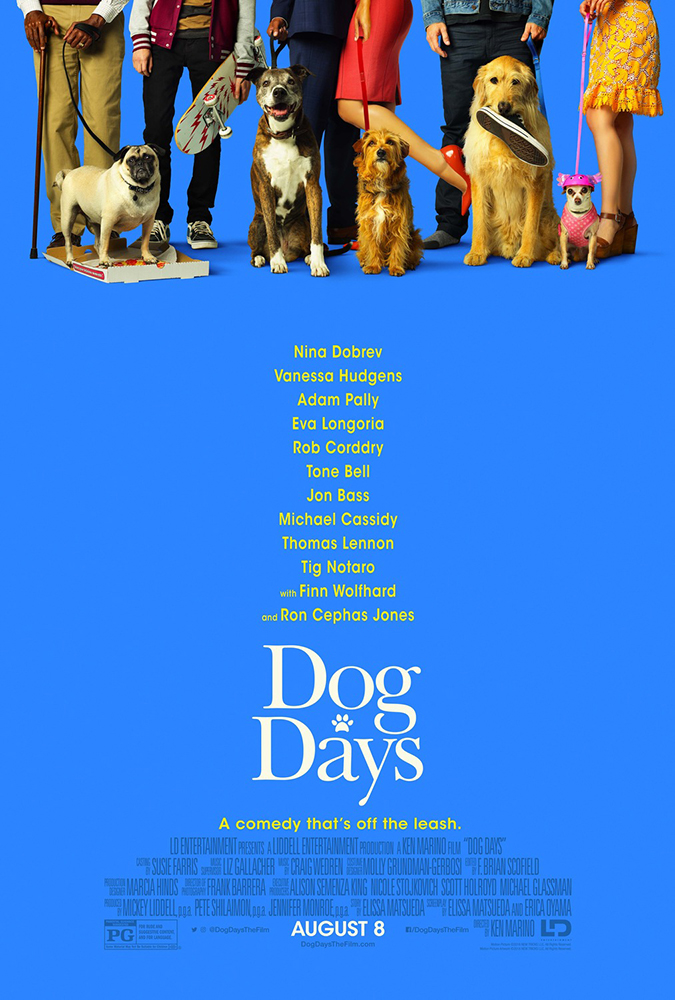 The most tantalizing release of the weekend is actually a Spike Lee joint. While he hasn’t had humongous box office success in his career–in fact, he’s never hit $100M domestically– the Brooklyn auteur’s films are often poignant and personal–which is great, except when you’re an investor, as seven of his last eight films have grossed less than $10M.

Focus Features’ “Blackklansman” couldn’t be more of a social lightening rod, and in much the same way Spike capitalized on “Malcolm X” and “Do the Right Thing,” his latest has a feeling of something important behind it, and that should bode well for its box office prospects.

In 1,500+ theaters expect between $10M-$12M and coupled with excellent reviews–it’s currently getting some of the best lip-service of his career–it could stay active in theaters for quite some time.