You wanna hear a phrase that sends shivers down the spine of Hollywood execs everywhere: YA adaptations.

After the success of “Harry Potter,” “The Hunger Games,” “Twilight,” “The Chronicles of Narnia,” and to some degree, “The Maze Runner” and “Divergent” (although the cliffhanger ending of that particular series became the bookend of the YA uprising), Tinseltown just couldn’t stop scooping up and dishing out copycats quick enough. It became an epidemic.

The issue with most YA content, especially when adapted for films, is the fact that most of the “mythology” is already pencil-thin. Meaning, that after the first novel, the action and motives become a blur of chases and backtracking, signifying little and exposing every cliché of modern storytelling.

If these YA films weren’t such rush-jobs, maybe the screenwriter and studios could mine the material a bit more; dig deeper. Sadly, not the case most of the time.

Derivative. That’s the word most associated with YA adaptations now when it comes to filmmaking. Even Disney tried to launch a franchise earlier this year with “A Wrinkle in Time,”—“Tomorrowland” also had the stink of YA—and spent a boatload doing so, but to no avail.

Fox served up “The Darkest Minds” late this past summer, and the X-Men wannabe turned out to be a huge bust. Remember “The Golden Compass?” “I Am Number Four?” “The 5th Wave?” “The Mortal Instruments?” “The Dark is Rising?” “Vampire Academy?” “Ender’s Game?” “The Spiderwick Chronicles?” Yeah, don’t be too hard on yourself, they aren’t worth taking up space in your noggin.

Not all of these were awful, but most were certainly undercooked and unprepared to add anything new to the genre, or cinematically in general. Contrived and commercially bankrupt—that’s what most YA adaptations are upon arrival.

Enter Universal’s “The House with a Clock in its Walls.” You might not know it, but this is a YA novel from 1973, by an author, who just happens to be one of my favorites, John Bellairs. RIP 1991.

Way before R.L. Stine, Bellairs was Mr. Slightly Sinister, and my gateway into Stephen King back in the day, churning out dozens of gothic scares, usually with the help of artist Edward Gorey, who added his wonderfully creepy illustrations along the way.

Like many serial pulps, Bellairs’ yarns follow certain tropes, however there was always something special about his books, something mysterious, and alive in terms of mythology. At that time, in the 70s and 80s, horror-themed YA wasn’t really a thing, and Hardy Boys and Nancy Drew weren’t exactly bedfellows.

The misadventures of of Bellairs’ heroes—Anthony Monday, Johnny Dixon, Lewis Barnavelt & Rita Pottinger—took turns starring in whatever his next adventure was. And if you’ve never read “The House with a Clock in its Walls” or “The Treasure of Alpheus Winterborn” no better time to start with the haunting season just around the corner.

Bellairs’ first big screen adaptation is set to swipe #1 this weekend at the box office thanks to the talents and notoriety of stars Jack Black and Cate Blanchett, not to mention director Eli Roth, who will likely find his groove, transferring his manic horror energy into a kid’s flick for the first time.

Interestingly, Black stars in this and not “Goosebumps 2,” which became a minor hit three years ago, drudging up $150M worldwide on a $60M budget. Not having him in the sequel will surely spell doom for Sony, although, great move by JB as this has franchise potential.

Also set to light a box office fuse is Michael Moore’s latest stalk-doc, “Fahrenheit 11/9,” which is hoping to cash in on Trump-bashing and sequel-hashing, as 2004’s “Fahrenheit 9/11” is still Moore’s most profitable venture of all-time, lighting up $222M worldwide.

In 1,500+ theaters, and armed with some of the most solid reviews of his career, expect “11/9” to land with around $6M, and possibly build up momentum as voting season is upon us.

If word-of-mouth is rousing, and especially if Trump takes to Twitter and decries this as, “fake news!” “F 11/9” has potential to break out.

Certainly, “Fahrenheit 11/9” won’t be screening in the White House this weekend, but if Trump ignores it, it probably falls by the wayside a lot faster. Wait a minute?! Trump ignoring a meatball pitched at his face? He’s gonna swing hells bells like a blindfolded kid with a piñata stick. This we know.

Everyone seems to love “This is Us.” It’s like Paul Haggis’ “Crash” on crack—in which the public championing led it all the way to Oscar Best Picture glory—but for TV audiences. The drama. The realness. The now-ness.

TV is not like the movies. Ask Shelley Long. Or David Caruso (I admit, had to IMDb him). Or, the entire cast of 90210. Or, Party of Five. Ok, I’m dating myself here. How about Charlie Hunnam? Taylor Kitsch? Is that current enough? You get the idea here.

Regardless, Dan Fogelman, the creator of TV’s sensation, “This is Us,” is also the writer/director of “Life Itself,” which Amazon Studios is releasing in 2,500+ theaters this weekend. Thing is, it’s getting lambasted by critics, currently sitting at a woeful 10% on Rotten Tomatoes—and that’s the kiss of death for adult dramas as we know it.

To say Amazon has had a tough go of it theatrically is the understatement of the millennium. “You Were Never Really Here,” “Don’t Worry He Won’t Get Far on Foot” and “Wonder Wheel” have grossed a combined $5.3M in North America. So, honestly, if this opens with $3M-$5M it would have to be considered a “success.”

Also getting a wide release—although I’m not sure it’s warranted as hardly anyone outside the inner click of Hollywood knows this film exists—is Neon’s “Assassination Nation.” The hardcore, R-rated film made waves at Sundance this year, fitting the mold of “Heathers” and “Jawbreaker” with teens behaving very badly in violent, sexual and chaotic ways.

I’m no prude, but this screams: EXPLOITATION.

Nothing turns off the box office faster than teens with guns (not to mention shovels) that think they’re in a Tarantino flick. Anybody see MoviePass’ “American Animals” earlier this summer? In 1,500+ theaters, expect one of the worst debuts of the year. Maybe the absolute worst. In fact, this might be grounds for theatrical harassment and eyeball abuse. Gonna make a call to my lawyer. BRB.

In exclusive release, Annapurna’s “The Brothers Sisters” hits the trail in 4 theaters. Black comedy westerns are a tough sell unless your name is Ethan or Joel Coen. Unfortunately, they weren’t consulted on this, but the cast including John C. Reilly, Joaquin Phoenix, Jake Gyllenhaal and Riz Ahmed should be enough to entice audiences. Let’s hope reviews stay strong—currently 84% fresh.

Lead-In Image (“The House With A Clock In Its Walls”) Courtesy of Universal Pictures; Poster Design by B O N D 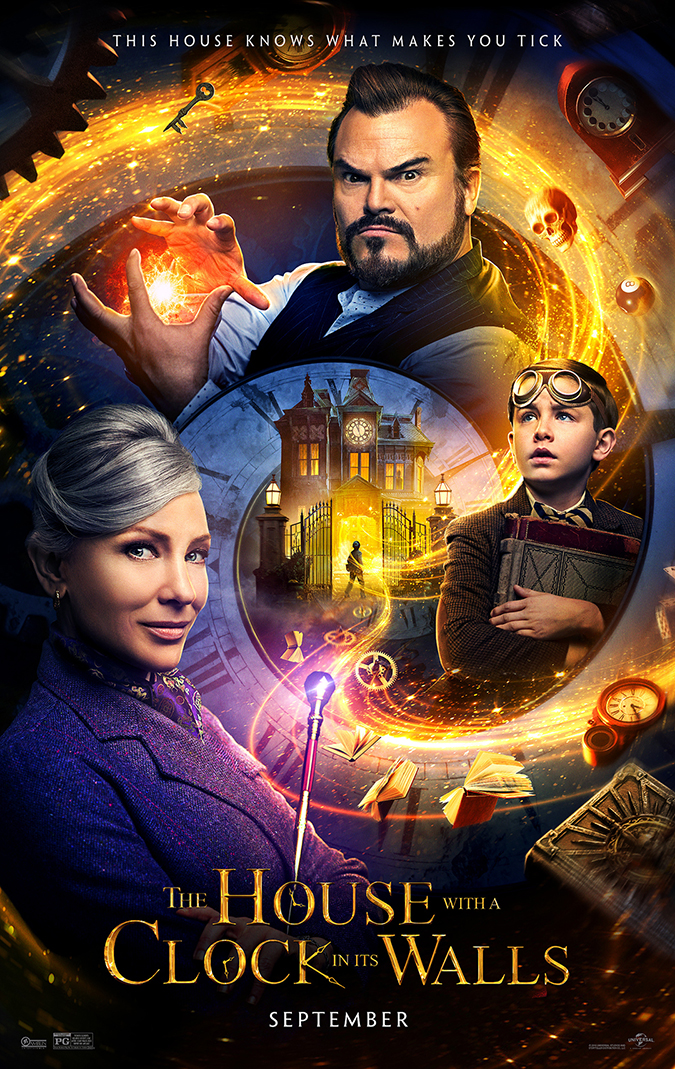