Alternative rock band the Ritualists (above) may hail from Manhattan’s Lower East Side, but they have a very British sound. And that’s alright by us.

Their new LP Painted People arrives this Friday, August 2nd. It’s a textured album, with layered productions that bring to mind such names as Suede, the Cult and Echo & The Bunnymen.

Check out the songs “Rattles” and “She’s The Sun,” and you’ll see what we mean. These are tunes — dripping with charm and new wave psychedelia — that should gain the Ritualists some more fans.

You can hear hints of yesteryear romance in the band’s latest video, “Ice Flower.”

We think the video should feature the band instead of professional wrestlers. But, hey, who are we to judge?

We were more interested in learning about Christian Dryden, the Ritualists’ lead singer, and asked if he would tell us about some of his favorite New York bands. 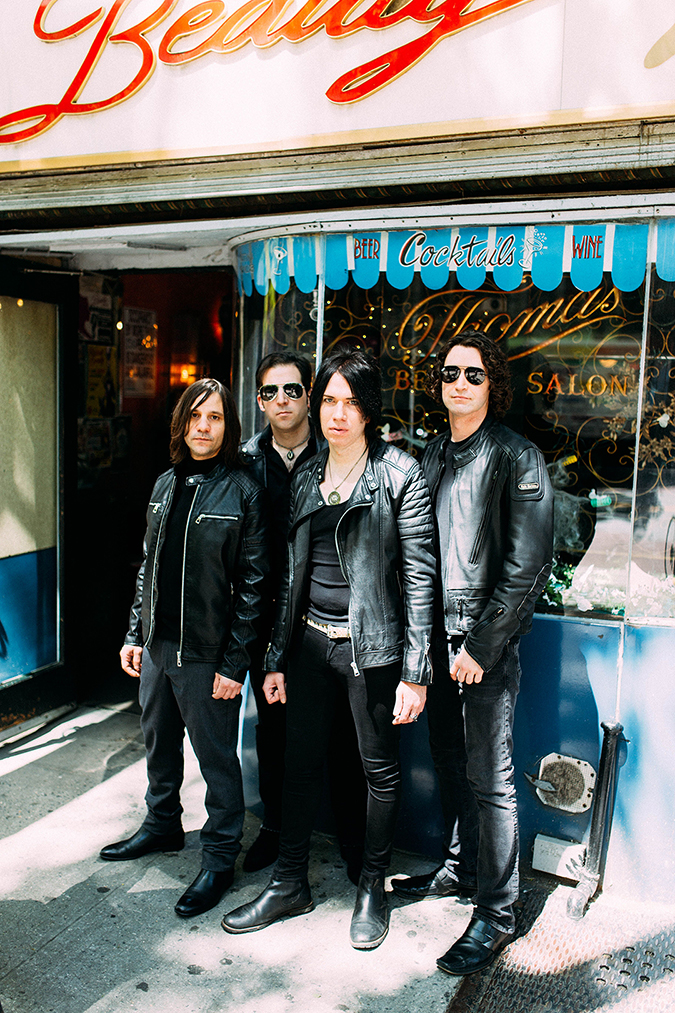 Here are Christian’s replies, in his own words…

1. “Venus in Furs”- Not only my favorite VU song, but one of my favorite songs, period!  I believe they said it was inspired by a movie they had seen of the same name, about S & M. It is simply one of the most unique & beautiful things I’ve ever heard.  I still remember the first time I’d heard the song, I immediately went out and bought the (Peel Slowly and See) box set.  I had to have everything from them!  The overall dark vibe created by the viola drone, the near-tribal drum beat, and the deadpan delivery on the verses is hypnotic.  The whole thing lands through the ultra-melodic chorus that, despite all of the avant-garde happenings, still manages to throw in a pop hook.  This song has everything.

2. “All Tomorrow’s Parties”- Maybe Lou Reed’s best vocal melody ever.  Similar elements to “Venus in Furs,” but a bit sweeter.  Nico’s vocal is other-otherworldly-detached and that repetitive piano seems to foreshadow the use of arpeggiators in a lot of the 80’s stuff I love.

3. “I’m Waiting for the Man”- The VU had a knack for interesting rhythms.  This whole song is based around repetitive driving eighth notes.  The guitar is jamming kind of bluesy, occasionally out-of-control riffs, and Lou Reed is singing about subversive subject matters.  It is one of their iconic songs, as it references NYC underground living and provides a little window into the “Old New York.”  Fascinating stuff.  Bowie’s cover of this isn’t so bad either.  🙂

4. “Here She Comes Now”- A sort of underappreciated track off a truly violent album, White Light/White Heat.  Again, pop hooks andcsaccharine vocal melodies on a bed of dark, strange mayhem, creating something truly unique and gorgeous. We’ve covered this one a few times live and people always come up and say, “Who was that you were covering?  That’s such a cool song!”  I tell them its the VU and they are surprised that it wasn’t a more popular track.

5. “I’m Beginning to See the Light”– This one has a great sing-along vibe to it.  I have so many memories of driving home from the city and everyone in the car joins in on the “How does it feel to be loved?” outro.  I also really dig the sound of the rhythm guitars on this one.  Lou & Co. create this repetitive strumming effect that makes the song groove.

6. “Who Loves the Sun”- Doug Yule on lead vocals!  Super-underrated singing, super-catchy with a shocking, almost Beach Boys-type harmony, minus the polish.  It’s a great summer song and truly a pop melody on par with anything else that was happening at the time.  I’m at a loss as to why this song was not a hit.

A Music Playlist: Just Say Immersion – Volume 15 – The Spring Ahead 2