Hello there and thank you, once again, for tuning in—eyes and ears— to AWOPBAMBOOM! This week, we interpret a cryptic cartoon music video from The Strokes, review Tame Impala’s new album, and more!

A VIDEO… OR TWO

The Strokes’ new cartoon music video for their song, “At The Door,” features a Heavy Metal-like animation style; however, the themes are about maturation. There are four storylines front-lining the video: a bunny survives a rabid attack, a boy copes with his difficult childhood, a futuristic space heroine rampages, and an otherworldly alien completes a rite of passage. Frontman Julian Casablanca’s vocals linger on the endnotes of each verse, resonating a holding-on-as-if-afraid-to-let-go tone. The synthesizer behind him is slightly reminiscent of an old arcade game; but, it’s pixelated rumbling twinkles to the emotional swell of the bass-and-guitar-line. The lyrics to the song reflect on an ending and fractured relationship while despairing impossible dreams: “Hard to fight what I can’t see/Not trying to build a dynasty/I can’t see beyond this wall/but we lost this game/So many times before.”

The Strokes also released another music video for their song, Bad Decisions, this week. The music video is an unfortunate advertisement selling a device that summons the band, The Strokes. The song shares similar instrumentals and tone with “I Melt With You” by Modern English.

Tame Impala’s album, The Slow Rush, is both dreamlike and a lucid stream of consciousness; the vocals and instrumentals brew underneath throughout while the vocals bubble and pop on top. The Slow Rush is the psychedelic rock band’s fourth studio album. The Slow Rush is such a delightfully weird trance to enter; and, whereas other contemporary artists may lean on and use the technology available to them as a crutch, Tame Impala precisely uses tech like synthesizers and bass to contribute and not dominate their music. 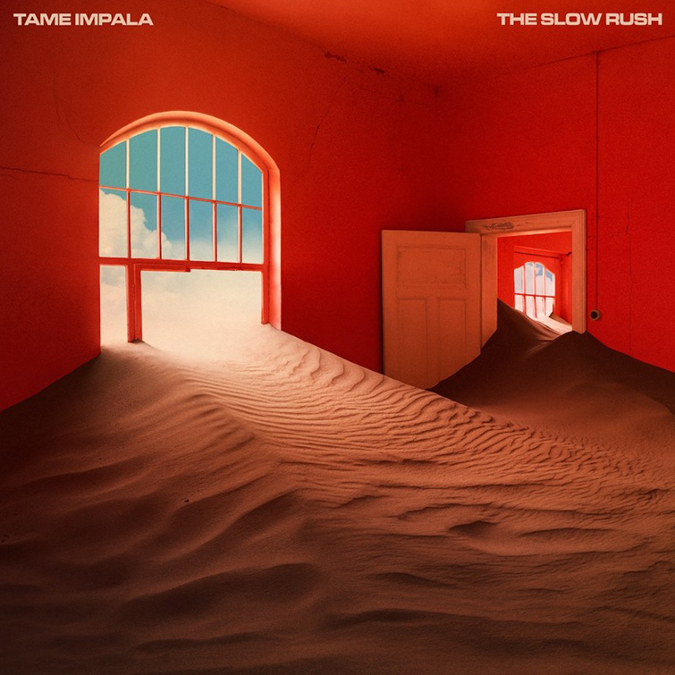 “Borderline”’s beat is borderline insane and brilliant. Don’t get me wrong, the flirtatious flute and hypnotic vocals add to the surreal siren-like headspace of the song; but, the drums and rumbling floor of the bass shakes your brain as “[you] hear [your] being dance from ear to ear.” (The Waking, Theodore Roethke)

Second, “Is it True”

A song in conversation with itself: just as the vocals/lyrics narrate a conversation between two people in a relationship, various instruments initiate and/or engage in call and response with themselves and each other. The wide range of percussion deepens the conversation with offsetting bass and bongos, synthesized planes of electronic sound, and the classic drum kit to bring it all together.

Next up—to hype us up even more— Pearl Jam released a second song, “Superblood Wolfmoon,” to their upcoming album, Gigaton. Eddie Vedder—in tune with the lycanthrope-themed lyrics—howls at the moon in rushed frustration. The thrilling electric guitar pumps blood through the veins of this beast of a song; the guitar solo also shreds and slashes like razor-sharp monster’s claws. The drums pace the heartbeat of the song as it builds and builds and is almost about to burst.

The first song Pearl Jam released in anticipation for Gigaton was “Dance of the Clairvoyants.” Vedder’s vocals are eclectic and prophetic like a tin-hatted oracle on the streets of New York City, holding a cardboard sign that rambles, “So save your predictions/And burn your assumptions/Love is friction…”

Musicians, friends and club-goers paid tribute to Andrew Weatherall, the DJ and producer who passed away this week at age 56.

For more, we go to the BBC: