My wife texted at 4:47pm to ask if I wanted a free ticket from our neighbor for a 7:15pm show of Nick Cave and the Bad Seeds at Barclays Center. I’m a rabid fan of most of Nick Cave’s music, but I had not bought a ticket to this show because, frankly, the prospect of seeing Nick Cave in a basketball stadium filled me with dread. U2, Jay-Z, Bon Jovi, sure. But Nick Cave? Who I last saw at the Beacon, and previously at the Prospect Park Bandshell? It seemed morally wrong. Still, I couldn’t say no.

I subwayed home, gulped down a Trader Joe’s Mahi Mahi burger, and walked down the street to the stadium whose construction my band had played a fundraiser against in 2004.

After negotiating my way through the metal detector (yes, that’s leftover Hanukah gelt from last year in my coat pocket), I roamed around in spirals looking for an elevator, walking like the dead among leather-jacketed, black-lipsticked weekend goth warriors and other Brooklyn pseudo-hipster parents like myself, circling the widening concrete gyre whose very hot dog vendors seemed at odds with the event at hand.

I entered the arena from near its apex, vommed out towards the nothingness of space from which a downward glance found a spec of stage occupied by an opening band that, from approaching the tunnel into the seating, I had thought was piped in Depeche Mode or Cure music. 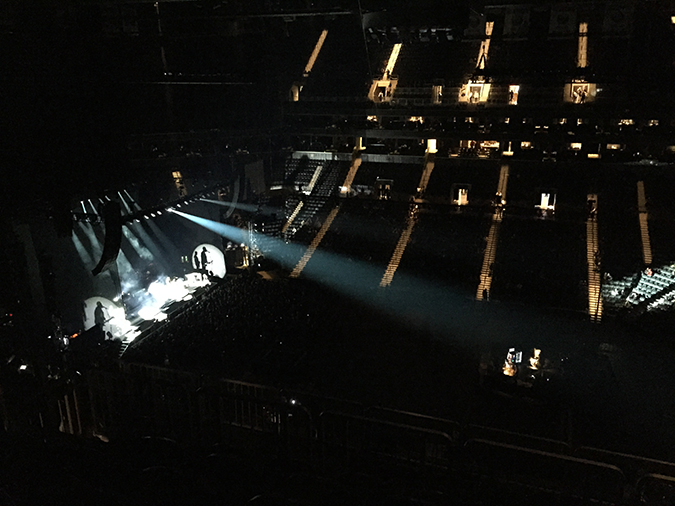 I found my assigned seat and then found a better seat down the empty row from it while the shadow-clad Cigarettes after Sex front man reminded me of what an interesting songwriter Morrissey was in his heyday by contrast. From the upper decks, the home of the Brooklyn Nets, even with the lights down, looked like a ghost town, a haunted stadium, the Grand Canyon.

I texted my wife: “Not a great venue for Nick Cave.”

Cigarettes after Sex finished without climaxing and all the lights in the venue went up, killing whatever was left of the mood by illuminating a sea of barren seats on every level. Even the standing room crowd only filled a third of the floor at the foot of the stage. This was just depressing. 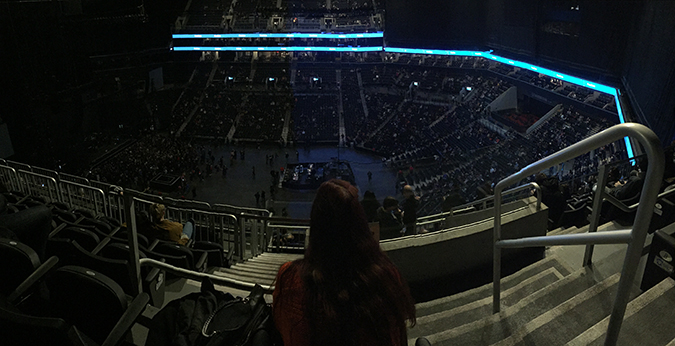 And then lights went back down and the Bad Seeds entered to a wave of applause. And now, thunderous applause: Nick Cave himself appeared. As if by magic, a new gust of fans had swept in, especially below, such that the stadium looked a little more respectably full.

This concert, I’ll pause to note, was not specifically in support of any recently released album, though it fell roughly a year after the band’s Skeleton Tree, a somber statement of grief recorded just after one of Nick Cave’s teenage twins died from a fall off a cliff in Brighton, England. The first two songs of the set were from that album, commencing the show with a painful moan instead of a bang. “Jesus Alone” calls drug addicts, young girls, and African doctors harvesting tear ducts to Cave’s voice and “Magneto” recounts clutching the toilet bowl in the bathroom and having homicidal instincts in supermarket queues.

Then, a tone shift into a funky groove and Nick Cave, at age 61, was dancing his patented lunatic baboon strut across, around, down to the edge of, and over the boundaries of the stage. He had audience members hold his chest while he leaned onto them, insisting that they listen to and explicitly feel his heart going “boom-boom-boom” in the midst of his recent Miley Cyrus-infused “Higgs Boson Blues” (from 2014’s Push the Sky Away, now played in the very venue from whence her twerk was heard around the world). “You’re not listening!” he admonished his acolytes with mock cruelty, in reference to his heartbeat. Laughter echoed up from the swaying masses.

Not until the fourth song of the set did Cave venture back to his recently re-released 1994 dark water mark album Let Love In and its lead track “Do You Love Me?” The same album’s stunningly articulated “Loverman” and the concert requirement “Red Right Hand,” separated by 1984’s “From Her to Eternity,” acknowledged the black lipstick in the house. 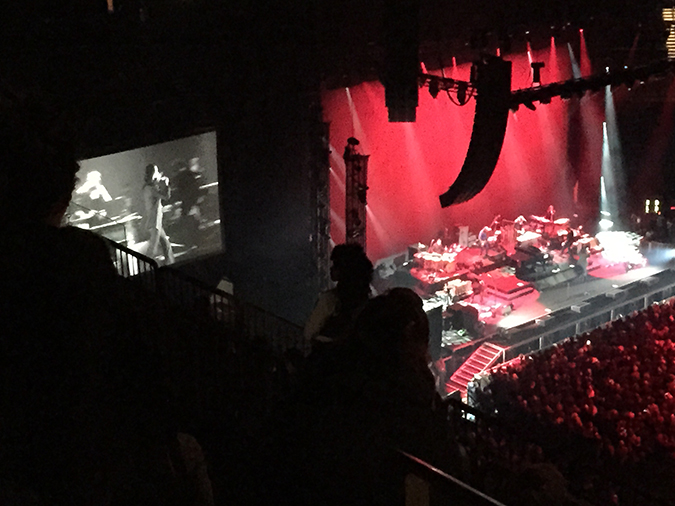 Everything Nick Cave does is for his audience, whoever they are, and everything the Bad Seeds do is for the betterment of Nick Cave. Nick Cave and the Bad Seeds of October 2018, though, were grieving their longtime pianist Conway Savage, who died in September. They seemed in that raw and acutely vulnerable state of creativity that only grief allows. There was music inside the music I hadn’t heard before, something unlocked. Nick Cave’s wingman—because he actually flaps his arms and electric violin around stage as if they were wings—is the bearded Warren Ellis, and he was in particularly fine, frantic form. The Bad Seeds are literally the most dynamic of bands—going from ear-shattering fighter formation noise to threateningly quiet undertow drone in a heartbeat (boom-boom-boom), peaking and subduing themselves with a precision that a good marine might embrace. Lighting effects accentuate the progression towards apocalypse— sharp, blazing flashes hitting in rhythm with the bells clanged on “Red Right Hand,” swooping down to a crimson glow to accompany the rhythmic rattle of a lizard who’s just snatched a dragonfly and now devours it in contemplation.

In keeping with the dynamism within each song, Cave always offers at least a few quiet piano ballads in the center of his sets for which he ceases his roaming over the stomping field of the stage. On this night he played “The Ship Song” and “Into My Arms,” concert standards, both beautiful in their simplicity and craftsmanship. Cave’s surprise of the night was the piano-grounded “Shoot Me Down,” with the introduction of Warren Ellis as a flautist on it. I knew “Shoot Me Down” from Cave’s Rarities and B-Sides 3-volume album. The crowd below recognized it, too, with their applause. “Oh, you know that one, huh?” said Cave, with something akin to humility.

Allow me to take a painful pause here to dwell on the fact that the collected imagery of Nick Cave pulls from violent acts such as shooting people down. His most popular album, Murder Ballads, features an epic account of a mass shooting at a bar from the killer’s demonic perspective. Classic Nick Cave albums through the mid-1990s offer rituals of blood and lust that ultimately resolve into redemptive peace. The murders, particularly the shootings, are essential to the experience.

This particular concert happened the night before an anti-Semitic lunatic killed eleven Jewish people in their synagogue in Pittsburgh. Except for the tirade against Jews, that killer could easily have been the protagonist in a Nick Cave song. It’s troubling, it’s real; it happened and it still happens– both the acts of mass and often bigoted violence and the Nick Cave songs that exploit the very acts that horrify us the next day.

And yet, “Shoot Me Down” has a lovely melody and Warren Ellis is a sensitive flute player.

Nick Cave in concert has much in common with children’s performers. His songs offer calls and responses, singalong choruses, and expected physical reactions. Sometimes he wants the audience under him to raise its arms as one and lower them together, like they were doing group yoga in the middle of Prospect Park. “The Weeping Song” asks that the audience clap rigorously and vigorously, making mariachi rain, until he cuts them off with a wide conductor’s sweep of the arms. I admit now that my preference for the “The Ship Song” over “The Weeping Song” is as great as Warren Ellis’ violin feedback is loud. And yet, Cave’s command over his masses is profound and most visible here. If he asked his audience to hop on one foot and do the hokey-pokey, they would do it without blanching.

Large yellow balloons appeared and bounced over the crowd at Cave’s feet, and the crowd tried to playfully swat them toward the platformed Cave, who sniped that the balloons were the venue’s ideas and threatened with sincere profanity against anybody taking his photograph with them.

Back to the stage, Nick Cave led a throng of about twenty people from the floor to join him and the band for what has become his traditional penultimate song: “Stagger Lee.”

This is the great exorcism. Cave careens through the violence of his updated folk fable about a man who shoots the bartender in the head, gets taken home by the lascivious Nellie Brown, gets cautioned by her about her man Billy Dilly, who Stagger Lee promises to sodomize, though when he meets him only has him “slobber on his head” before shooting him in his. Then the devil shows up and Stagger Lee kills him, too. The lucky audience members on stage gyrate like the writhing bodies in Dante’s Inferno under Cave’s command (put your left foot in and shake it all about…), laughing with him and themselves as they cast aside their social mores and embrace their glorious ids, knowing their images are blasted across the Barclays jumbotrons and are likely to be featured prominently in subsequent concert reviews. 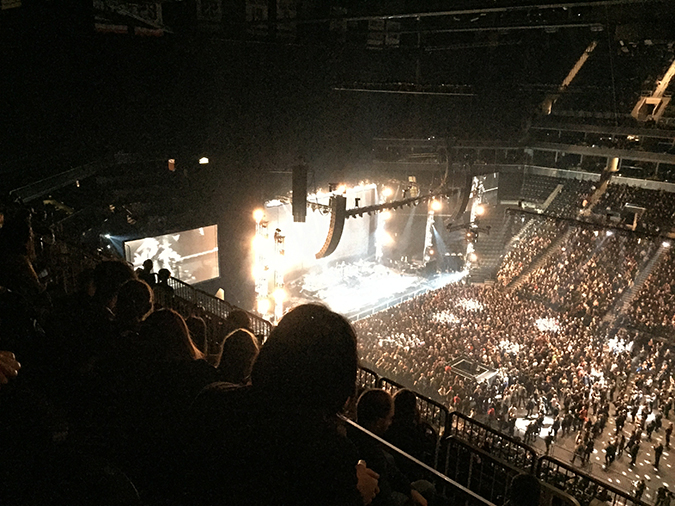 “Thank you, New York!” said Nick Cave as he hugged audience members and let them return to their rightful places.

Nick Cave and the Bad Seeds left stage and shortly after returned back for a three-song encore: “City of Refuge,” followed by “Mercy Seat” (“Warren reminded me I had to play that one”), ending with another singalong, this time wordless, of a particularly catchy descant from 2016’s “Rings of Saturn.” Oo-oo-wee-oo-ee-oo.

Thank you, and good night!

I texted my wife, two and a half hours after my last text: “Okay, it’s over. And it was awesome.”

Jim Knable is a playwright, songwriter, and writer of cultural articles and fiction. His band The Randy Bandits released two studio albums, one live album, and a stream of home and live digital recordings while playing the best venues for local acts in NYC (Rockwood, Knitting Factory, Union Hall, The Bell House, etc.). His latest play Master Wilder and the Cabala has been developed through workshops at the University of Illinois Urbana-Champaign. Previous plays produced at MCC Theater, Soho Rep, Woolly Mammoth Theatre, and Target Margin; published by Samuel French and Broadway Play Publishing. He has written theater articles for The Brooklyn Rail, film and music reviews and commentary for NewsWhistle and Frontier Psychiatrist, and recently interviewed prominent directors and sound designers for the Stage Directors and Choreographers Journal. He lives in Brooklyn with his wife and sons. 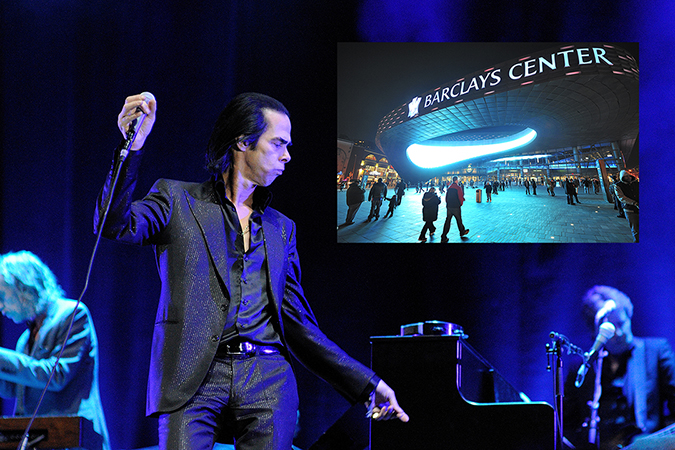 All other images courtesy of Jim Knable.

The Three EP – Six Crucial Questions for Saved by Friday

Six Crucial Questions for Nick Leet of High on Stress