Here’s a fun fact for ya: 30 years ago this weekend, when comedy classics “Back to School” and “Ferris Bueller’s Day Off” debuted #1 and #2 at the box office, there was only one sequel in the Top 10, “Poltergeist II: The Other Side.”

This weekend, there will be potentially seven films in the Top 10 that are continuing sagas. That’s right, folks, welcome to Sequel Nation.

And while the mass media has already called out sequels as the scapegoat for the slumping summer season–and they’re not altogether wrong–there is a very good reason for audiences that love franchise films to reboot, regroup and retaliate.

Over the span of the next three weeks, theaters will see four additional major motion picture continuations, which will either cause a popcorn riot, or butter up audiences into a zen-like popcorn munching malaise. Actually, both those options  don’t sound so bad.

The reason for the silver lining? Well, the four sequel horsemen are as follows: “The Conjuring 2,” “Now You See Me 2,” “Finding Dory,” and “Independence Day: Resurgence.” All look to be relatively solid entries, with the latter two possibly out-grossing the originals on a worldwide basis.

While this weekend’s chill pill and Vegas magic show probably won’t cauterize the box office bloodshed that sequels have spilled compared to their predecessors, WB’s “The Conjuring 2” should come close to equaling the $41M debut of the original three years ago, as horror hasn’t yet found a new king to follow, and only WB’s spin-off, “Annabelle,” has made any real noise.

Coupled with solid reviews, director James Wan and original leads Patrick Wilson and Vera Farmiga returning, and no other horror flicks in the Top 10, “The Conjuring 2” should scare the bejesus out of the box office and easily debut #1 with around $38M.

While Universal’s $160M warhead of box office doom, “Warcraft,” has done decent business overseas over the last couple weeks, that didn’t save their ill-fated “Battleship,” as it sunk domestically with just $25M in its debut and finished with a disappointing $65M.

Update: China scored a record-breaking $46M it’s first day of release this past week; $90M in two days, which puts it on track to easily pass the lifetime total of “Batman V Superman” there, which was $95M.

That makes “Warcraft” the top mid-week opener ever for a western film. Pays to have Chinese backers on a project like this, and it’s also worth noting that a lot of online “Warcraft” players reside in China–a property that is much more popular than Star Wars there.

Hey, it’s a very real possibility that if “Warcraft” gets a sequel –possibly fully financed by Chinese corporations this time–that Universal doesn’t even release it in North America. That’s the state of the union right now, folks.

Still, you never, ever spend $220M on a board game adaptation, and you certainly don’t spend $160M on a video game adaptation. I mean, apparently it’s like the holy grail in Hollywood, because every studio in town seems convinced that they’ll be the ones to find it eventually if they just keep digging…and spending ludicrous amounts of quarters.

All this for what? Remember there has been only one film in the history of video game adaptations to top $100M+ domestically and that’s “Lara Croft: Tomb Raider.” Angelina Jolie in tight-fitting clothes. Now you know why. Believe it or not, with nearly $90M, “The Angry Birds Movie” might join her.

“Warcraft” hitting that mark? Not a chance domestically. Should do “Battleship” numbers, but there is a lot of direct competition this weekend, so it’s very possible the PG-13 flick will top out at around 25M in 3,400+ theaters, especially when you consider it has just 24% on Rotten Tomatoes–by far the worst reviewed tentpole of the summer so far. Game over, man, game over.

Is there any magic left at Lionsgate? The studio is banking on “Now You See Me 2” to over perform like it did three years ago, when it debuted with $29M on its way to $351M globally. The $75M film became the counter-programming hit of the summer, with unusually long legs.

And while most of the stars return for the sequel, director Louis Leterrier is replaced with Jon Chu. Yes, the director of “Jem and the Holograms.” To be fair, he also helmed “G.I. Joe: Retaliation” and Leterrier most recently helmed “The Brothers Grimsby.” You just never know sometimes.

In 3,100+ theaters, expect around $23M, as middling reviews didn’t hurt the first one, and shouldn’t affect this once much either. Unless, of course, this sequel is infected with sequelitis–something that is becoming routinely common this summer.

In exclusive release this weekend comes A24’s documentary “De Palma,” which chronicles the career of one of the true rebels of Hollywood, director Brian De Palma (“Scarface,” “The Untouchable”). Fascinating stuff for any movie buff.

CLASSIC CUTS OF THE WEEK: “Back to School” and “Ferris Bueller’s Day Off”

Box office believe it or not: It was thirty years ago this weekend when Rodney Dangerfield’s “Back to School” and John Hughes’ “Ferris Bueller’s Day Off,” debuted #1 and #2 in theaters. Yes, two comedies, both of which have stood the test of time.

Kevin Smith has already apologized for this film many times in his best Canadian accent: “Sorry ‘boot that.”  But, you know what, it looks pretty fun…if you like warped flicks featuring teenagers chasing around foot-high sausage Nazis. I mean, honestly, who doesn’t like that?

Yes, he cast his daughter, Harley Quinn Smith, and also Johnny Depp’s kid, Lily-Rose Depp…and guess what, she’s the real find here.  She could be a real star, if that’s what she decides she wants–a chip off the old blockbuster, if there ever was one.

Poster Image (Now You See Me 2) Courtesy of  Lionsgate; Poster Design by LA 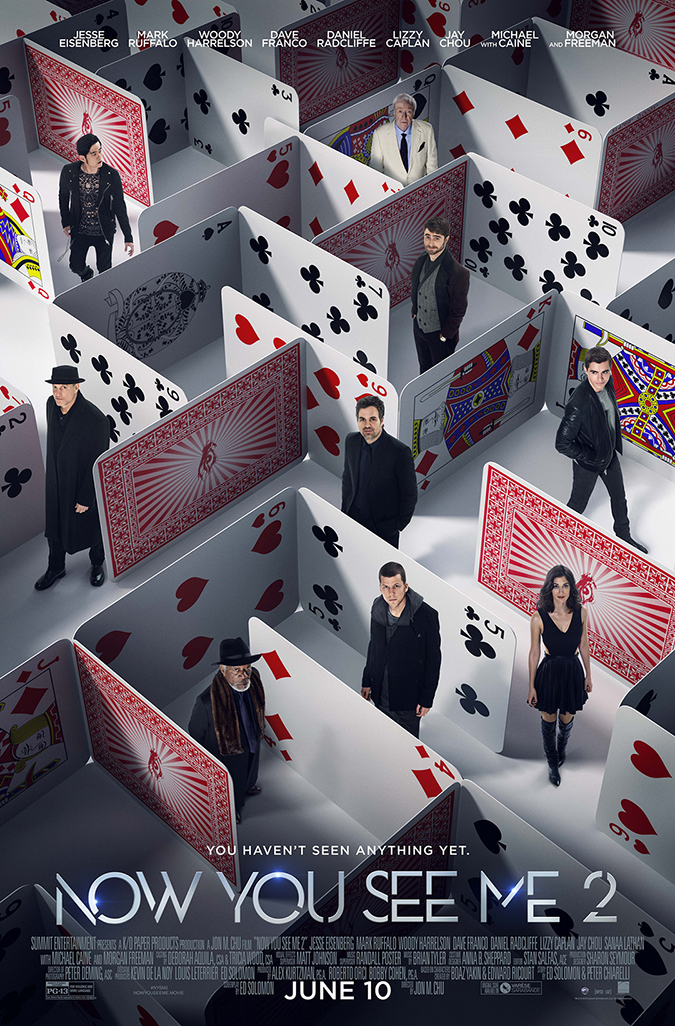