Lydia Bourne lives in Connecticut, is married to an Englishman, and has a job which is largely in Italy (working with her sister, who lives in Florida). But she’s lived all over, including Melbourne and Geneva, so this is hardly an unexpected situation for this citizen of the world. I asked her to take some time to tell me about her Rastrello brand, and she was kind enough to do so. Here’s what we talked about:

Hometown: I was born in Managua, Nicaragua 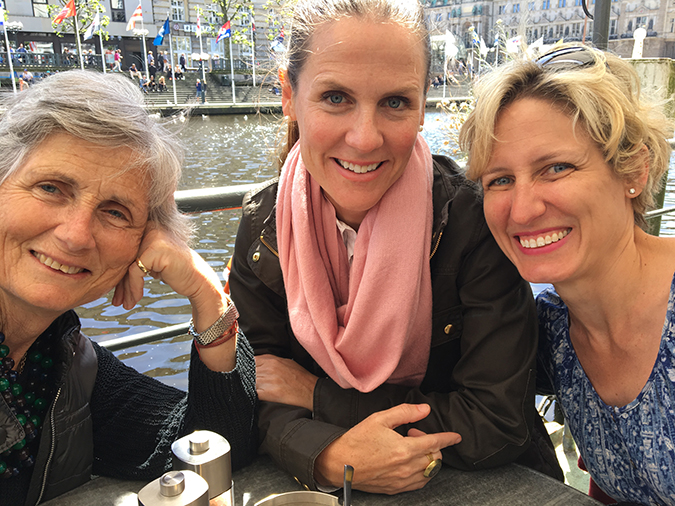 Thank you for taking the time to talk with me about Rastrello.  What’s your “elevator pitch”?

Rastrello is our olive oil and boutique hotel brand name. It means “rake” in Italian and that small hand rake is a symbol of the olive harvest, which is a time when everyone comes together. Our small Umbrian hotel is an intimate environment, where visitors come to experience rural Italy. We are equidistant from Florence and Rome, making us a perfect location to explore Italy to the maximum. 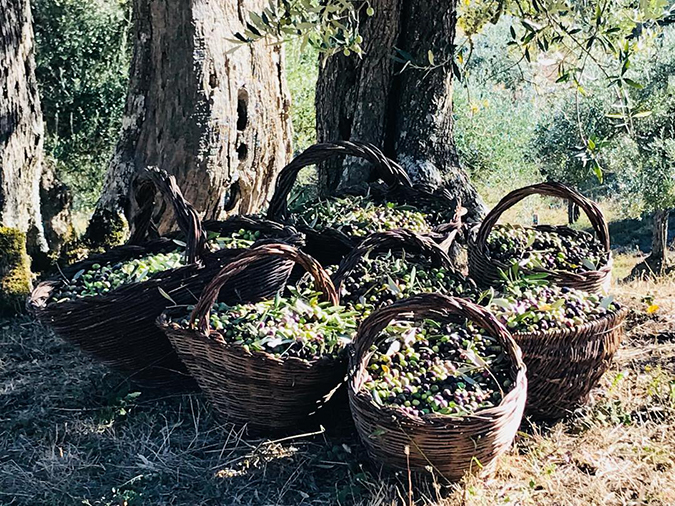 So I understand you are now an olive oil sommelier?

Yes, I took the course at the International Culinary Center in New York. They actually judge olive oil; they run an olive oil competition.

Is olive oil as complex as wine?

It isn’t, because to become a wine sommelier it takes four years, and this is a short course! But it is a very intense week. There are not as many varieties of olives, but there’s a serious technical part to knowing about them, and their chemistry.

Here’s a great quote: according to Antonio Lauro, the olive tasting panel leader and consultant, “the olive is innocent.”

That’s a nice thought! I’d rather eat innocent food, given the chance!

At Rastrello, we do biodynamic farming, which is environmentally-friendly. No pesticides, and we deeply prune the olive trees, which creates equal sun exposure. We are favoring quality over quantity for our product. It takes us only three or four hours to get the olives from the trees, into crates, and into the mill. It must be a fast process so we can avoid oxidation. Air, light, and heat are the enemies of the olive.

The higher the altitude, the more bitter the olive, and they are more mild tasting at lower altitudes. Flavors depend on the varietal and on the climate. 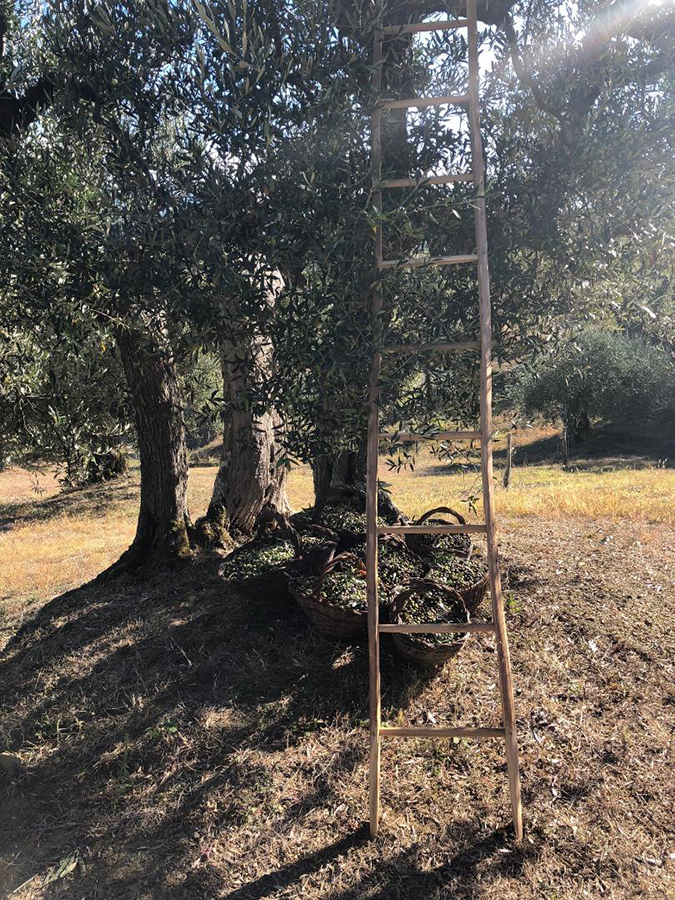 Which kinds of olive do you grow? And are they all for oil, or are some for eating?

We have Leccino, Moraiolo, Frantoio, and Pendolino. And they are all for oil. We have 400-year-old trees, and we are also planting younger ones.

There’s a woman in Spain I am hoping to visit; she also does biodynamic faming, but she is at another level. She does something called “owl hacking.”

So where she was growing her olives, they had a problem with moles eating the roots. She didn’t want to poison or trap the moles, so she asked, what eats moles? Well, owls do, and so she raised baby owls and they started eating the moles. By bringing in the owls (which were native to the area) she solved her problem! She’s all about using indigenous plants and animals. She says there should always be ten different colors in the grass—to make sure that you have all nutrients you need for the soil.

At Rastrello, we use chickens to fertilize the soil.

Do you get eggs? And do you eat the chickens?

We do get eggs, but we don’t eat the chickens! But we actually want to get sheep. The sheep will help prune the trees, fertilize the soil, and cut the grass. A non-indigenous animal, though, wouldn’t be good for the soil.

And there are a lot of other things we can do. We’re planting hedges where there has been run off, because when the soil washes away, the nutrients get lost.

And we practice “no till” farming. When you dig up the soil, the wind blows the minerals away. So we want to do things that are better for the harvest, but also better for the environment, the birds, the wildlife. 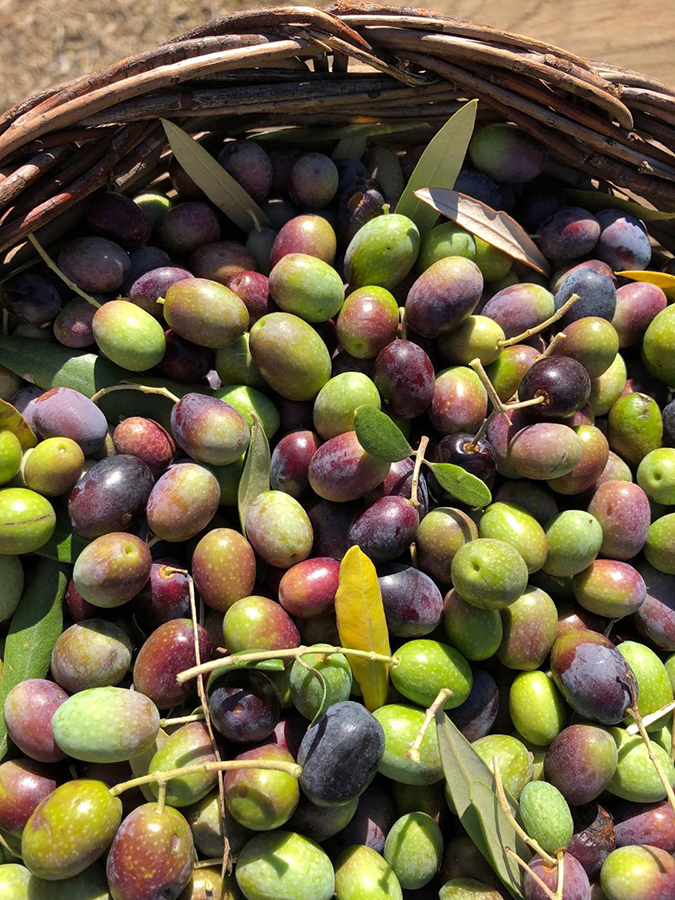 How do you know if olive oil is pure?

There is misinformation in olive oil marketing.  When it says “Italian” consumers think it is, but 175 thousand tons were produced in Italy last year…and they exported more than that! They blend in olive oil from other places.

We know ours is pure because we do it. The olives are hand picked. We don’t use machines because they bruise the olives. We take the harvest, we watch it go through the mill, we taste it. We have it at my mom’s house. We get together after the picking and have a big lunch. No one wants to go home afterwards.

That sounds delicious! Is your family originally from Italy?

My father is German, from Bremen. My mom is American but she spent a lot of time in Lisbon growing up. Her parents worked for Pan Am, so we’ve all been all over the world.

When I was living in Geneva and my sister was living in Munich, they decided they wanted to be closer to us, so they moved to Europe. While visiting a cousin in Italy, they saw this house for sale that they loved, and they bought it. It’s very much like Under the Tuscan Sun! (But in Panicale, in Umbria, not Tuscany!) The place had dirt floors, and a huge pizza oven. It had been a communal bread oven for the village. My mom bakes bread in it, still. They grow vegetables. Then the olive trees and the chickens! They’ve been doing that for 25 years. But the hotel is new. We just bought that last year, and it’s under construction now.

So you and your sister are professionalizing it?

Yes, my brother-in-law and sister bought the land there. On Fridays we have meetings through Google Hangouts. My sister has a Master’s degree in Hotel Management from Cornell. We hired a hotel manager. The olive grove, which is on 12 and a half acres, is only a ten-minute walk from the location.  The hotel will be small, with 8 guest rooms.  It’s a little village. My mom does a lot there, she also raises money for local charities. 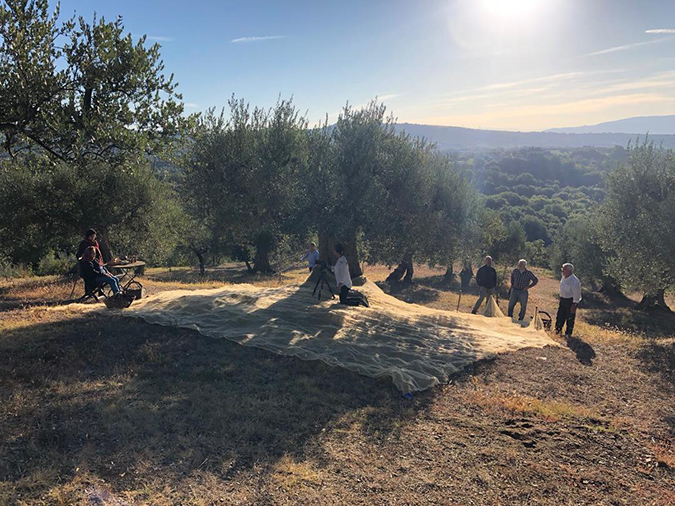 Are you going to move to Italy?

Maybe sometime! When my son finishes high school we will think about the next thing! I speak some Italian (I used to be a nanny in Rome), but I’m a little rusty. I was there at the last harvest, though, and I will be at the next one.

Is it hard for visitors who don’t speak Italian there?

No, you can get by well without speaking Italian there. Many Americans and Brits come to visit. Nancy Silverton, the chef, has a house there and lives there part of the year. It’s a very international place. (My parents are fluent in Italian, which helps.)

When I’ve visited Italy I’ve always been impressed with how welcoming the people are, and especially to kids. They really like kids! And they’re patient and flexible with English speakers butchering their language. (I’ve been guilty of that!)

Yes, they really do like kids. It’s a great place to visit. People are very social and there’s a lot to do. They have opera performances, and there are always people spending time in the piazza. And there are movie nights.

I was in Trento and Bolzano, in northern Italy, last summer during a heat wave, but at night, there were tons of people out late, enjoying the cooler evening.

So the hotel and the olive grove are also close to cities for people who want to do some more travel from there?

Yes, there are many trains that are 1 hour 40 minutes to either Florence or Rome.
There are two a day (early morning or late evening) that are only one hour.

Or you can do shorter trips, go to the lake, take ferry boats, go shopping (there’s an island to buy lace). There are bike trails. There’s a cashmere factory of Brunello Cuccinelli in a nearby town of Solomeo. And great restaurants, all around. 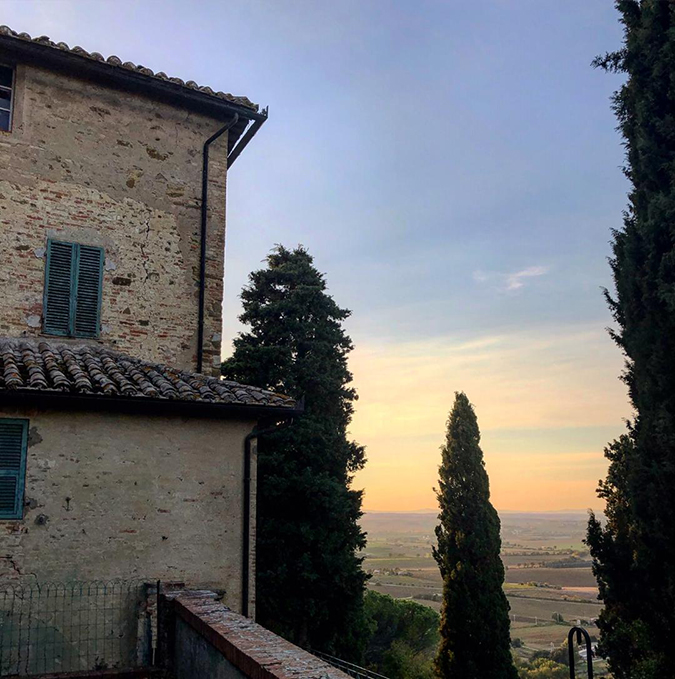 When is the best time to travel?

November is great, you can visit the olive mills, do olive oil tasting. There’s also a chocolate festival. I’d say the spring and the fall are the best times. We’ll be open in August (when a lot of places aren’t). And at Christmas!

Will the hotel be open all year?

So most of the year! When can we book a trip?

We’re opening for business in spring of 2020. We will have a beer garden, and cooking classes, all kinds of things!

In the meantime, how can people buy your olive oil?

Right now, just email me at lydia@rastrello.com! I had 140 cases (six bottles each) from the last harvest in my basement, and now there are only 40 cases left, just selling to local people and stores, starting with family and friends. We’re not even doing much with social media, it’s truly word of mouth. But next year we’ll have our website all set up so people can buy it on line and we’ll ship it. 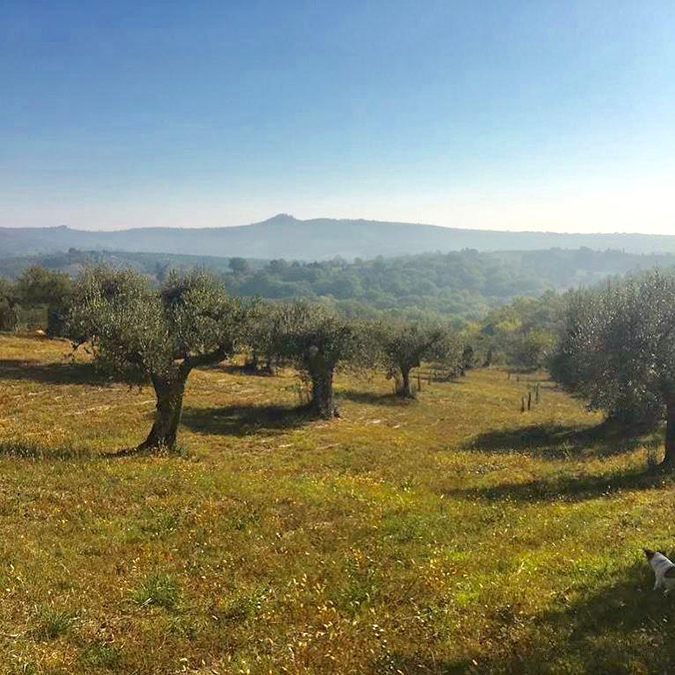 So we all know about hotels (and yours will be lovely, I’m sure!) but what should we know about olives and olive oil that we don’t?

So many things! Olive trees are actually bushes. And olives are actually fruits. There are over 1,500 types of olives. Extra virgin olive oil (or EVOO) is the only unrefined oil that exists—it is made with no heat. It is just crushed fruit, pure olive juice. Olive oil is an important part of the Mediterranean diet—people who eat the Mediterranean diet live longer than anyone else in the world!

No one has tons of time to cook.  The secret to a good Mediterranean diet is fresh produce and simple recipes.  A good extra virgin olive oil is always included. 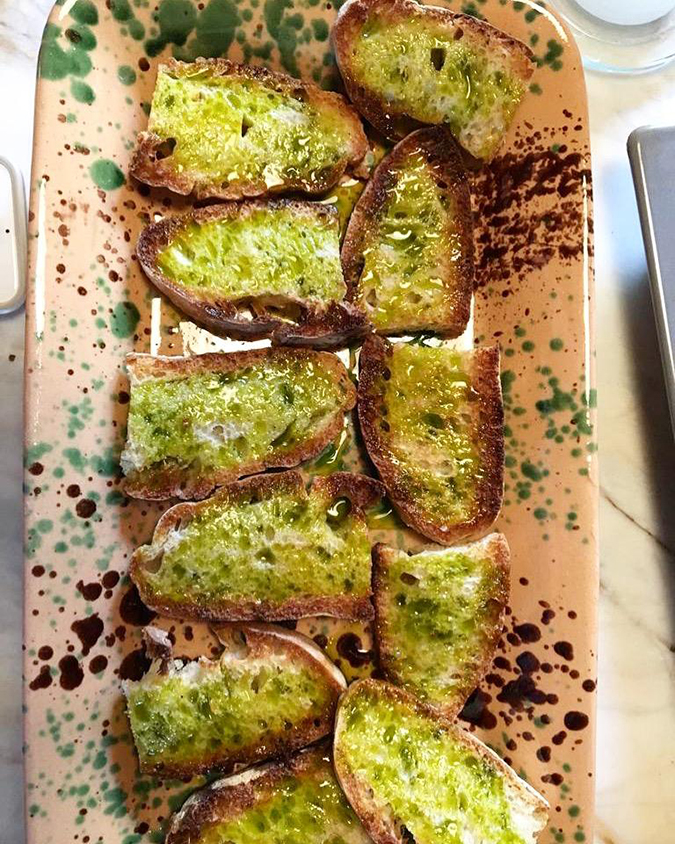 So, are there any books or movies that you recommend for people interested in Umbria?

Yes: Living in a Foreign Language: a Memoir of Food, Wine, and Love in Italy by Michael Tucker, Marcus of Umbria: What an Italian Dog Taught an American Girl About Love by Justine Van der Leun, and The Umbrian Supper Club by Marlena De Blasi.

I’ve never read any of those! I will have to check them out. Thank you! I hope to come visit Umbria! 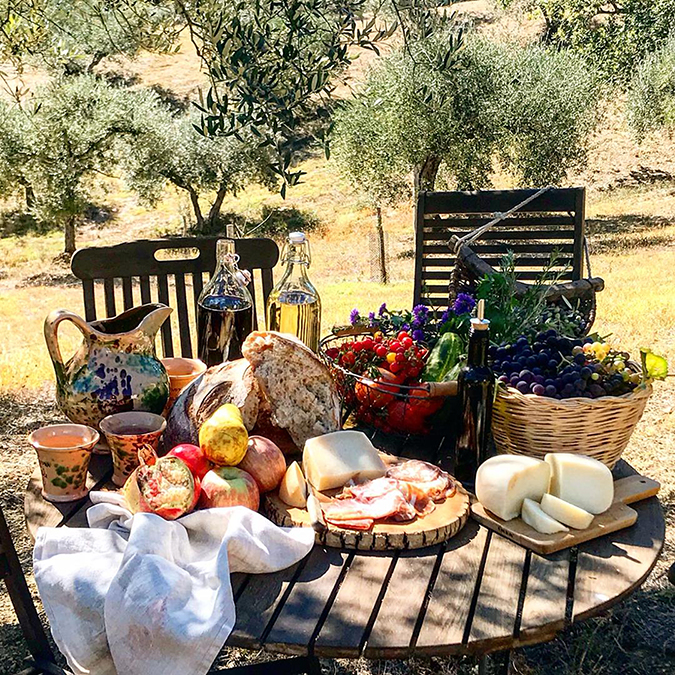