I really miss restaurants these days.  I like large parties, and happy hours after work, and tasting menus with wine pairings, and pub grub, and treating those younger and broker than me, and having someone else pick up the check.  I like dining alone–a good meal can be company enough, although I also like meeting friendly strangers while eating at the bar.  I like New York City restaurant culture, and tipping generously, and I like eating meals in new (to me) cities.  And I like going out with my kids and introducing them to something new (to them). Right now it’s not possible to do any of that, so I thought I’d finally get around to reading Kitchen Confidential.

Anthony Bourdain was a very good writer.  What he didn’t have, unfortunately, was a good editor–this book works better as a collection of essays than as a cohesive narrative.  It’s in roughly sequential order, but it leaves out a lot of transitions and explanations, including a rather big one: how he ended up as the chef at Brasserie Les Halles. The preface, afterword, and bonus material at the end help put the book, and the author’s career, in better perspective. Of course it’s impossible to read it now without bearing in mind that he died by suicide, having attained wealth and fame beyond his imagining when he wrote these words.

If you know of Bourdain from television, as a goodwill ambassador who brought people from around the world together through food, and as a supporter of #MeToo and his girlfriend at the time of his death, Asia Argento, you may be a bit appalled at some of the content of this book, the one that initially made him a public figure.  He described the kitchen culture, one he loved and was at home with, as cavalier with food safety, filled with hostile sexual innuendo and rampant drug and alcohol abuse, dysfunctional in every way, inhabited with society’s outcasts,  committing petty (and not so petty) crime and every manner of vice.  He respected women who were tough enough to survive this atmosphere, but did not consider his role in the system that made that toughness necessary.  Still, even at his drug-addled worst, he had his good points and they’re on display here: loyalty, dedication to his craft, a sincere love of food, an incredible work ethic, a fierce intelligence, humor, and an authentic and honest voice.

When he wrote about some formative memories that may have set him on his path, like his introduction to vichyssoise on board the Queen Mary crossing the Atlantic, and his first oyster, later on that same family vacation, it reminded me of Julia Child’s My Life in France.  (His later tales of debauchery most decidedly did not.) His anecdotes about his various jobs, the restaurateurs he encountered, the craziness of the kitchens and the motley crews who worked in them: comedy gold.  He described his addictions and his career struggles, as well as assorted practical advice about home cooking, menu selection when dining out, and the restaurant business generally, but there’s very little here of his internal life.  His wife (Nancy Putkoski) rated only a few mentions in passing, with nothing about their relationship and what kept them together (or eventually drove them apart). He didn’t explain why he started writing (or how on earth he had time to manage it).  And there’s much here that interferes with any continuity this memoir may have had: long digressions about crude kitchen staff, poor restaurant management, the corruption of union shops and food vendors, the symbiotic relationship between chefs and bartenders, and so forth.  My impression of Bourdain here is that he was opinionated, arrogant, irascible, bright, articulate, and somehow likable.  (A friend of mine knew him personally and described him as always unfailingly kind–and yes, despite the wild stories, something of that does come across.)

Also, towards the end, there’s a really lovely bit about his first trip to Japan and discovering a new culture, a new cuisine, a new place.  He’s shy and awkward, going to Starbucks before working up his nerve to order food he’s unfamiliar with in a language he doesn’t speak.  It was real and sincere and sweet, and I loved his enthusiasm.  Of course, knowing about his subsequent career and relatively recent death, that part also made me cry just a bit.

Read Kitchen Confidential if you’re interested in the restaurant business, the specific New York stories, or if just want to learn more about Anthony Bourdain and where he came from.  There are some suicide references, which are extremely disturbing in hindsight.  And if you are put off by rough language or reading about self-destructive behavior, or if you will find this look back too painful, knowing the author’s sad end, you may prefer to give this one a miss. 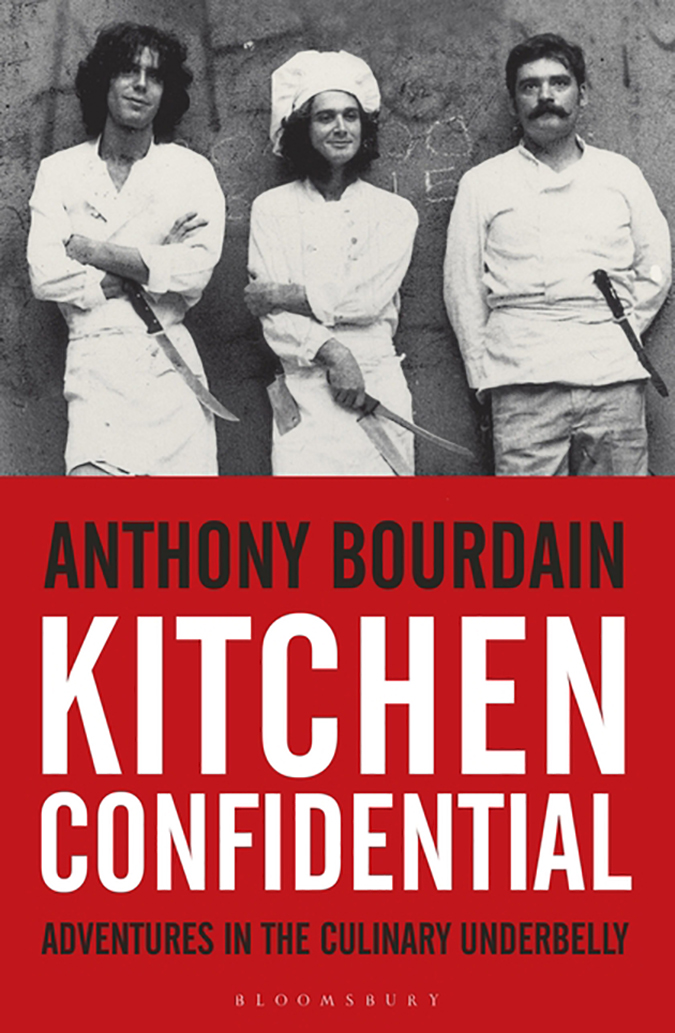