Back in 2018, I asked the musician Steve Sandberg for some book recommendations, and he mentioned a book for children called Momo, which I wasn’t familiar with.  (He also recommended Lizard Music, which is excellent–I’d just about forgotten about its existence, and was happy to have the reminder.)  So, I’ve meant to check out Momo for the last two years and now that we’re all stuck home, I finally got around to it.

I cannot believe, now that I have read it, that this novel isn’t more widely-known in the English-speaking world.  (It’s very popular in Ende’s native Germany.) It’s simply terrific and utterly charming.  It’s a bit like The Phantom Tollbooth and it’s a bit like The Little Prince.  Guila Pines compared it to Madeleine L’Engle’s A Wrinkle in Time in The Atlantic recently.  But it’s also wholly original.

You see, the novel concerns Momo, a young girl of mysterious origins, who was a gifted listener, a true and loyal friend, and a peacemaker.  The city in which she lived (unnamed, but similar to Rome, which is where Michael Ende wrote most of the book) was invaded by the sinister Men in Grey, who promoted the idea of “timesaving,” but instead, were parasitically stealing the peoples’ time.  As they took over, the culture and the people changed in unfortunate ways–a mania for efficiency and speed took hold, design and joy become superfluous and suspect, and life became “poorer, bleaker and more monotonous.”  Only Momo, with her particular gifts, really understood the truth of the matter: “time is life itself, and life resides in the human heart.  And the more people saved, the less they had.”

With the help of Professor Hora and a tortoise, Cassiopeia, that could see a half hour into the future, Momo was eventually able to defeat the Men in Grey to restore the stolen time.  The residents of the city (except for Momo’s friends) didn’t realize what had happened, but life immediately improved:

“Children played in the middle of the street, getting in the way of cars whose drivers not only watched and waited, smiling broadly, but sometimes got out and joined in their games.  People stood around chatting with the friendliness of those who take a genuine interest in their neighbors’ welfare.  Other people, on their way to work, had time to stop and admire the flowers in a window-box or feed the birds.  Doctors, too, had time to devote themselves properly to their patients, and workers of all kinds did their jobs with pride and loving care, now that they were no longer expected to turn out as much work as possible in the shortest possible time.”

Ende was making a point, of course, about stress, consumerism, over-consumption, technology, and how to live a fulfilling life.  It’s probably a good book to read at any time, but it is a perfect book to read during quarantine. It seems right now that Mother Nature herself is telling us to slow down, and pointing out the myriad flaws in our society, government, health care services, values, and ideas of what workers are and aren’t “essential.”  Read this book to yourself, and to your children, and let’s hope that they have some of Momo’s incredible talent for listening, because Ende’s message is one that we all need to hear if we are going to ever truly vanquish those Men in Grey.

HOW TO PURCHASE: This book (quite unfortunately!) seems to be out of print in English, but can be found used on Amazon, Ebay, Alibris, and other such websites. 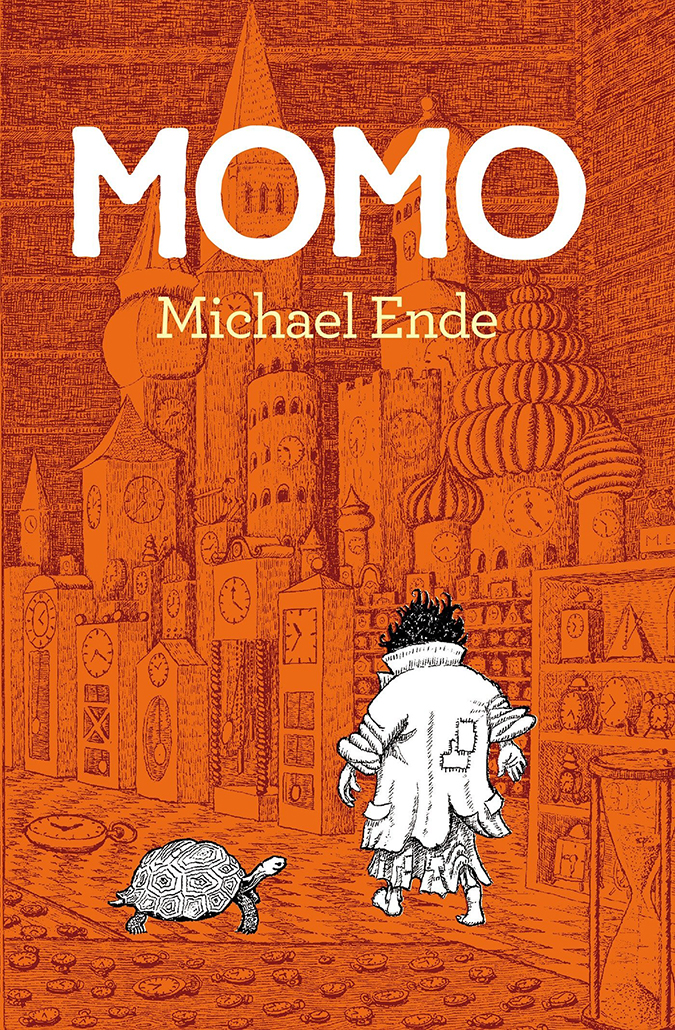