BOOK: No Time to Spare: Thinking About What Matters

No Time to Spare is a collection of essays, originally blog posts, collecting some of the best of Ursula Le Guin’s online pieces towards the end of her life.  The world lost a great treasure in 2018 when she died, mere weeks after this book was published, and these selections, written between 2010 and 2016, demonstrate that she had lost none of her talent for beautiful and piercingly intelligent writing.

The title’s a reference to her old age, as well as her typically sardonic and original take on a questionnaire from Harvard for a reunion planned for 2011. She was of the class of 1951, although then, women received degrees from Radcliffe, which “at that time was affiliated with but wasn’t considered to be Harvard, due to a difference in gender; but Harvard often overlooks such details from the lofty eminence where it can consider all sorts of things beneath its notice.” Her observations about the questions from the alumni association include an assertion that “Economic stability and growth for the U.S.” makes no sense as an answer to the question of “What will improve the quality of life for the future generations of your family?”–she eventually wrote “you can’t have both.”  She pondered the list of other such “improvements,” and found them strange, limited to quite immediate concerns and filtered through current right-wing obsessions.  She was floored by query 14: “Are you living your secret desires?” And she was somewhat appalled by the question regarding “spare time,” which included 27 potential occupations, beginning with “Golf” and including “Shopping,” “TV,” and “Bridge,”  as well as “Creative activities (paint, write, photograph, etc.)”. As a writer, still occupied by her craft in her 80s, she pondered as to whether her entire life’s work has been a creative activity: a hobby, something to fill up spare time upon retirement?  She concluded (after some digressions about the treadmills of programming that kids seem to generally be on these days) that she didn’t know what spare time actually is, her time being fully occupied, by living: tiresome body maintenance, sleep, daydreaming, writing, thinking, cooking, seeing friends, walking, reading, traveling.  “What is Harvard thinking of?” she asked–”I am going to be eighty-one next week.  I have no time to spare.”

Besides her thoughts on growing older, this volume includes writing about her pet cat (absolutely charming), a rattlesnake (fearsome), a lynx (indestructibly solitary), her correspondence with readers, her fascination with words, her thoughts on Steinbeck, Homer, Wordsworth, and literary prizes, feminism, various serious problems with American culture, operatic and symphonic performances, eggs, rituals, and childhood.

The introduction, by Karen Joy Fowler, sums up why Le Guin was such an amazing writer and why she means so much to so many: “She has been both playful and powerful.  She has, in her life and work, always been a force for good, an acute social critic, necessary more now than ever as we watch the evil turn the world is taking.  We who followed her both as readers and writers are the lucky ones.  We not only love her; we need her.”

If you love and/or need her short stories, her Earthsea novels, or The Lathe of Heaven, give this volume (“a more casual Le Guin, a Le Guin at home”) a try.  If you aren’t familiar with her brilliant and unclassifiable fiction, you have much to look forward to. 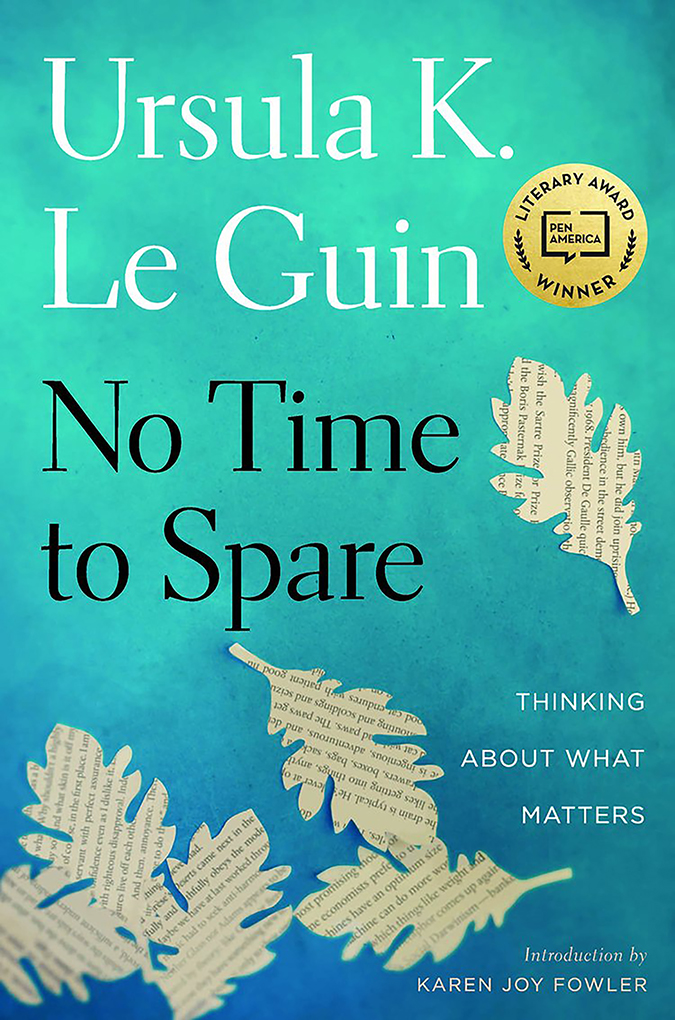