BOOK: Strength in What Remains

Before I picked up Strength in What Remains, I read two other books by Tracy Kidder, both of which I thought were well written, but not extremely compelling or original.  Among Schoolchildren is the story of a year in a  fifth grade classroom in a public school in the United States, and having gone to public schools in the US, and having my children attend public schools in the US, there was nothing particularly new for me there (yes, good teachers work hard, teaching is a difficult job, children are complicated, and so on), although it may be an interesting read for someone unfamiliar with the environment, or perhaps for a cultural historian in the distant future.  Small Town, a look at Northampton, Massachusetts, and the people who lived there in the 1990s, including a police officer, the mayor, and a struggling single mother, is perfectly fine as a portrait of a community–but also did not do anything to enlighten me, as I was already quite familiar with the culture Kidder depicted.

Strength in What Remains, however, brought me to some quite unfamiliar environs.  It tells the story of Deogratias “Deo” Nyizonkiza, a young man from Burundi, who survived the civil war and genocide in his home country and in Rwanda, and fled to the United States in 1994, where he struggled to maintain a precarious existence (he was a non-English speaker, living in abandoned buildings and in Central Park, barely getting by on the $15 a day he earned delivering groceries).  Along the way, he was severely traumatized, burdened with the immense losses of family members and friends, the alienation of a new and unfriendly place, and extreme poverty. Also along the way, he was rescued, repeatedly, by ordinary people who helped him–from a woman in a banana grove who claimed to be his mother and saved him from militiamen who were rounding up Tutsis, to his wealthy friend who arranged a business visa and a cash gift of $200 and got him on a plane to JFK, to the baggage handler at the airport who took pity on him and gave him a place to sleep when he arrived in New York, to a former nun who took him under her wing and introduced him to the benefactors who eventually paid for his education and his immigration attorney, and provided him with a home.

Deo, who had been a medical student in his home country, ended up graduating from Columbia University, attending the Harvard School of Public Health, working for the medical non-profit organization Partners in Health with Dr. Paul Farmer, then attending Dartmouth Medical School, and eventually returning to Burundi to build a health clinic and found a non-profit organization, Village Health Works. (The book ends there, but Village Health Works has grown considerably in the past ten years. Besides basic health care, the organization also focuses on education, food security, economic prosperity, and community engagement, training teachers, feeding students, supporting farming and livestock co-ops, and sustaining community cooperative programs that help create economic opportunities and provide the tools necessary to lift participants out of poverty.)

Deo’s story is amazing, vivid, and well-told.  The parts of the book which covered his early life, his experience as a refugee, his intercontinental flight, his homelessness in New York City, and  how he found a home, learned English, and began school–those were brilliant, beautiful and painful both, and profoundly moving.

The last third of the book did not work as well.  The author inserted himself, in my opinion, far too much into the story–when Kidder and Deo traveled to Burundi together, the writing wasn’t nearly as strong.  It’s far less interesting to read about the journalist’s experience than it is to read about the protagonist’s experience. The narrative became somewhat confusing, as well…the non-chronological structure worked, up to a point, but several important scenes were covered more than once–we were given some stories directly, plainly told in the third person, and then again, via the author’s interaction with Deo, told in first person, leading to unnecessary repetition.  And then, some important developments were given short shrift–like Deo’s decision to leave medical school and begin a non-profit, which was glossed over.

In short, it’s a good book that had potential to be great, and could have been so with a strong editor and a timeline that made more sense.  (Both a personal timeline and a Burundi timeline would have been useful here, as well as a map.)

Strength in What Remains is well worth reading, however, despite its flaws. I very much appreciate the title, referencing a portion of William Wordsworth’s “Ode: Intimations of Immortality from Recollections of Early Childhood,” as follows:

“What though the radiance which was once so bright
be now for ever taken from my sight,
though nothing can bring back the hour
of splendor in the grass, of glory in the flower;
we will grieve not, rather find
strength in what remains behind.”

And I appreciate Deo: his resilience, thoughtfulness, courage, keen intelligence, dedication, and determination to improve his home country, even as he struggled with his own trauma, and with the unanswerable questions of good and evil, and his attempts to reconcile his personal horrific experiences with a belief in a just God.

Deo’s story (and others like it) need to be told, and need to be remembered.  His conviction that misery, ignorance, poverty, hunger, and disease lead to brutality and indiscriminate slaughter, is an important insight and one we should keep in mind.  Since his arrival in NYC in 1994, the US immigration laws and policies have only become harsher, and more inhumane. New York City has become wealthier, and crime has decreased, but homelessness is a growing problem, and the wealth disparity now is the greatest in the nation.  It pains me to think that if Deo instead arrived today, that the city would be even less welcoming to an impoverished, undocumented newcomer, however brilliant and determined he might be.

Read Strength in What Remains, learn Deo’s story, and take it to heart.  Perhaps one day, you, or I, will be that woman in the banana grove, that minimum wage baggage handler, that attorney who takes what looks to be a hopeless case, or that journalist who shines a light on what the powers that be would prefer to remain in darkness. 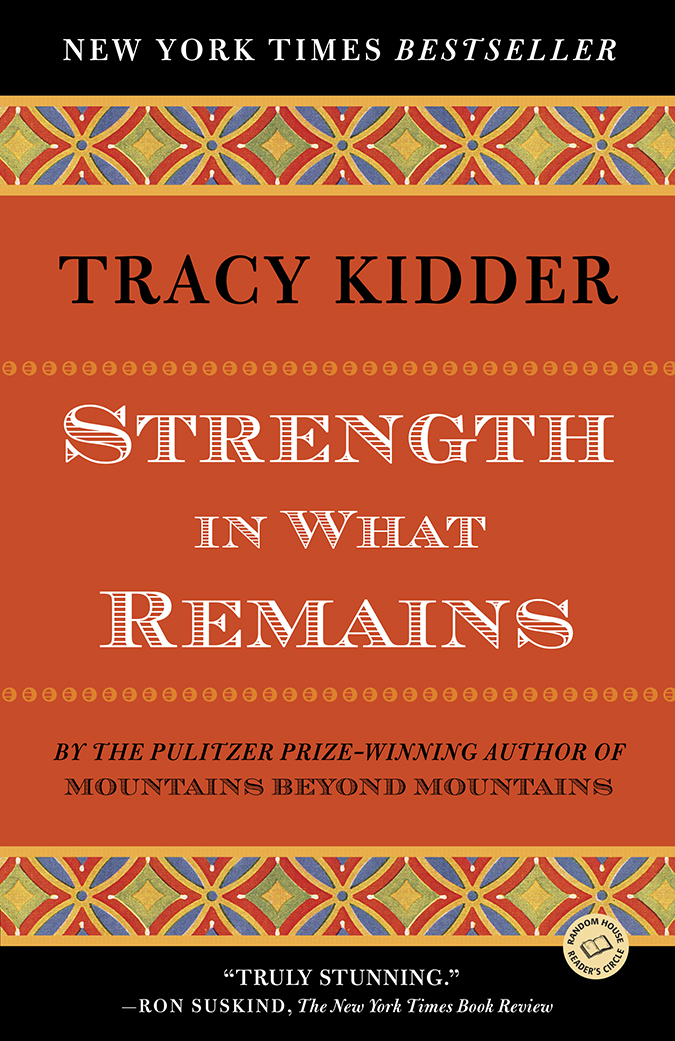