I have been reading The Great C.S. Lewis Reread by Matt Mikalatos, which is, exactly as it sounds, an online column in which Mikalatos re-reads as an adult an author who greatly influenced his literary and theological development.  I’ve appreciated his thoughtful reflections on the Narnia books, covering both what is lovely about them and some well-considered criticism.  After finishing that series, he moved on to analysis of The Great Divorce, which I hadn’t read.  It seemed like a good time to rectify that omission, and one recent day, when my husband was at the office and our daughters were both at summer camp, I took myself out to lunch at a French bistro, and read The Great Divorce while enjoying a lobster salad and white wine. (It’s certainly not a bad way to read a novel by C.S. Lewis, or anything else, for that matter.)

It’s a short book, easily read in one sitting (especially if you linger over your lunch and order a second glass of wine).  There’s not much plot; instead it’s an allegorical journey, a theoretical (and theological) depiction of the afterlife, a meditation about good and evil.  If you’re looking for action and adventure, look elsewhere.  Evil here is absolutely banal. Satan doesn’t put in an appearance, and there’s no fire and brimstone, or torture.  Hell is a gray, boring, rainy, cheerless city, full of unpleasant and selfish people who quarrel and complain.  We only see the foothills of heaven, but its denizens come out to welcome a saint–Sarah Smith, an absolutely ordinary woman, not particularly accomplished or brilliant, not famous on Earth, but who was kind and loving and who influenced, for the better, virtually every person she met.

And here is what is so wonderful about C.S. Lewis at his best–whether or not you share his Christian faith, his insights about human nature are brilliant.  His argument here is about good and evil being an everyday choice–that each of our actions, the many decisions we make throughout our days, and throughout our lives, either bring us closer to evil or closer to good. It’s a comforting theology in many ways–we are our choices, for better or worse, and we absolutely have the decision-making power to alter them…even after our deaths, when we can choose to stay in that unhappy and uncomfortable city, or board a bus to heaven itself.  It’s not easy, of course, to change or to improve, but, Lewis argues and illustrates, it can be done, and we get second, third, fourth, fifth, in fact, hundreds of chances. We have to give, to love, to focus on others and not ourselves, on the truly important instead of worldly achievements, and not to succumb to emotional blackmail or cling to what is harmful to us, but to face reality instead of pleasant lies and self-delusions.

Brimming with big ideas, literary references, realistic depictions of dysfunctional human beings, and some startlingly beautiful imagery, The Great Divorce is worth your while.  It might even change your life. 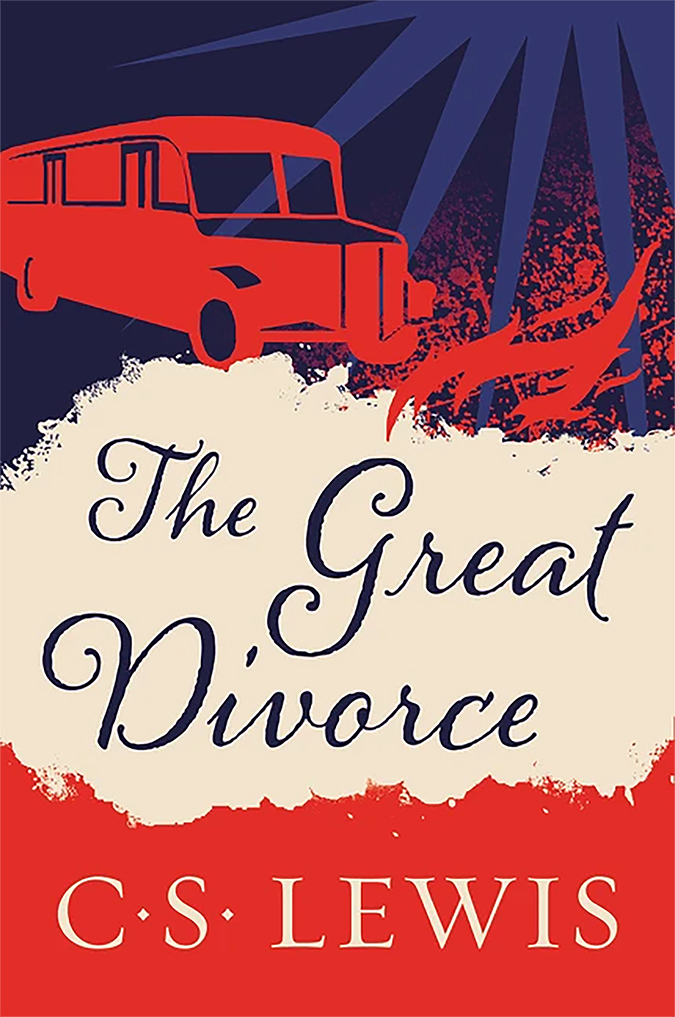