BOOK: The Sense of Style–the Thinking Person’s Guide to Writing in the 21st Century

Steven Pinker is a cognitive psychologist, linguist, and author.  He’s occasionally controversial, but whatever his politics are, he’s a very good communicator, and this book about good writing, what it is, and how to achieve it, is rather elegant in style, and very smart in substance.

He gives us some examples of writing that is well done, including this excerpt from Betraying Spinoza by Rebecca Newberger Goldstein (his wife), interweaving the personal and the philosophical, about human beings trying to make sense of their lives:

What is it that makes a person the very person that she is, herself alone and not another, an integrity of identity that persists over time, undergoing changes and yet still continuing to be–until she does not continue any longer, at least not unproblematically?

I stare at the picture of a small child at a summer’s picnic, clutching her big sister’s hand with one tiny hand while in the other she has a precarious hold on a big slice of watermelon that she appears to be struggling to have intersect with the small o of her mouth.  That child is me.  But why is she me? I have no memory at all of that summer’s day, no privileged knowledge of whether that child succeeded in getting the watermelon into her mouth. It’s true that a smooth series of contiguous physical events can be traced from her body to mine, so that we would want to say that her body is mine; and perhaps bodily identity is all that our personal identity consists in. But bodily persistence over time, too, presents philosophical dilemmas.  The series of contiguous physical events has rendered the child’s body so different from the one I glance down on at this moment; the very atoms that composed her body no longer compose mine.  And if our bodies are dissimilar, our points of view are even more so.  Mine would be as inaccessible to her–just let her try to figure out [Spinoza’s] Ethics–as hers is now to me.  Her thought processes, prelinguistic, would largely elude me.

Yet she is me, that tiny determined thing in the frilly white pinafore.  She has continued to exist, survived her childhood illnesses, the near-drowning in a rip current on Rockaway Beach at the age of twelve, other dramas.  There are presumably adventures that she–that is that I–can’t undergo and still continue to be herself.  Would I then become someone else or would I just no longer be?  Were I to lose all sense of myself–were schizophrenia or demonic possession, a coma or progressive dementia to remove me from myself–would it be I who would be undergoing those trials, or would I have quit the premises?  Would there then be someone else, or would there be no one?

Is death one of those adventures from which I can’t emerge as myself?  The sister whose hand I am clutching in the picture is dead.  I wonder every day whether she still exists.  A person whom one has loved seems altogether too significant a thing to simply vanish altogether from the world.  A person whom one loves is a world, just as one knows oneself to be a world.  How can worlds like these simply cease altogether?  But if my sister does exist, then what is she, and what makes that thing that she now is identical with the beautiful girl laughing at her little sister on that forgotten day?

Pinker then proceeds to explain what it is that makes this passage so powerful, and that is what he does throughout, showing, by example, what works and what doesn’t, and explaining what the issues are that tend to impede good writing.  Rather than a pedantic list of rules, he breaks down grammar and syntax (and what types of writing can make a passage confusing), what he calls “the curse of knowledge” (the failure of writers to realize that their readers don’t have their specialized knowledge or familiarity with their jargon), how to ensure that your writing as a whole is coherent, and how many arguments about proper usage are in fact arguments about levels of formality.  He also reminds us that the English language is continually changing, so it is unwise, and really quite pointless, to expend too much energy railing against terms like “irregardless” and “ain’t.”

If you are a language nerd, a writer, or a lover of good writing, you will likely appreciate Pinker’s analysis and advice.  (And if you are not particularly interested in the art of writing, you may find this book helpful as a reference, although it is, perhaps, not an ideal beach read.)  His ending words sum up why good writing is important, and why we should strive for good style: “to enhance the spread of ideas, to exemplify attention to detail, and to add to the beauty of the world.” I can’t argue with that.

RATING (one to five whistles, with five being the best): 3  Whistles 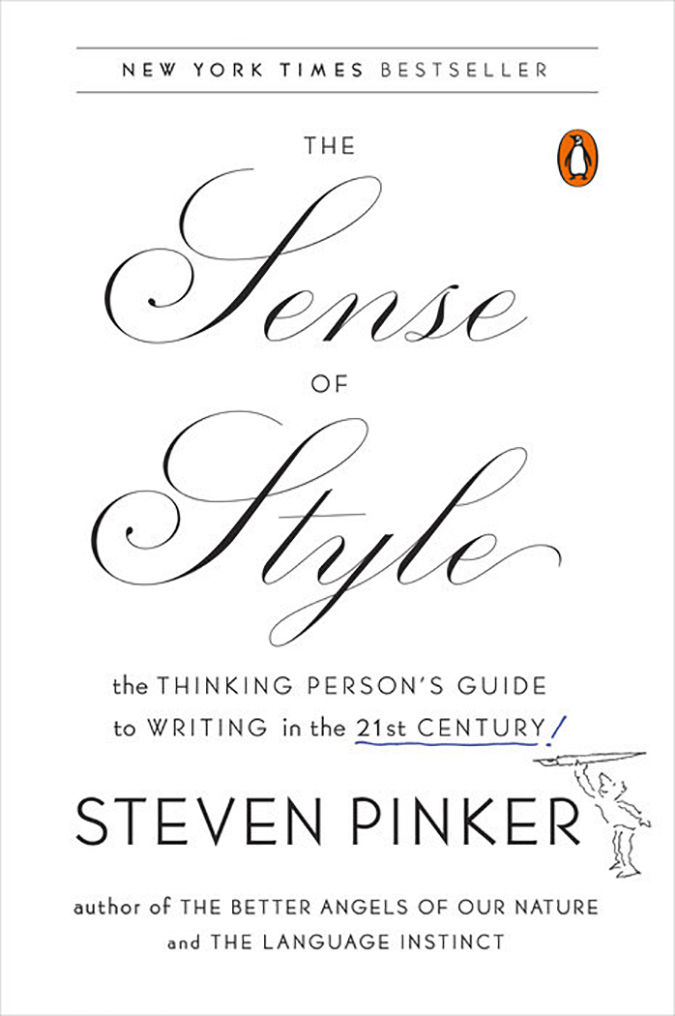