First Man is crashing and burning at the box office, and it likely won’t have legs, as the audience has spoken: this is not the Neil Armstrong biopic they wanted.

That’s not to say the $70M production doesn’t have redeeming value– it does, but in spurts, and not as an awards contender, or a film that will be thought of fondly the way “The Right Stuff” and “Apollo 13” still are today.

The most glaring issue is the fact that as an audience, we don’t know much more about Armstrong the man, even two hours and twenty minutes after watching this biography. That’s a big, gaping problem. Yes, Houston, we have a problem.

In the film, Armstrong is moody, driven, doesn’t speak much, and doesn’t have much of a personality at all. His wife, played by Claire Foy  is fine, but doesn’t have much to work with as she is pretty much asked to cry, worry, and smoke a lot. You can almost see Kate McKinnon’s SNL skit where she’s abducted by aliens here.

I can’t imagine that’s what the real Armstrongs were like—but that is what the filmmakers decided to show, which is a depressing slog, and definitely downplays most of the triumph involved.

It’s almost as if the entire film was a negative critique of what NASA was doing and how they were playing fast and loose with lives and money. That may be true, but this is supposed to be a biopic, not a social commentary on NASA. That’s a different film.

When your most interesting person is merely an afterthought—Buzz Aldrin—again, there are big issues at play. Why not bolster the film by adding more Aldrin, who seemed like a real character?

When you think back to “Apollo 13,” behavior and emotions are front and center in the triumph of the human spirit. In “First Man,” we follow a man, sometimes in first-person, sometimes seeing the bigger picture, but it is the human spirit in constant decay. In Ron Howard’s pic, you’re in the arms of Tom Hanks, Gary Sinise, Kevin Bacon, Bill Paxton, and Ed Harris, and you get fully developed characters that resonate because of their interaction with others.

“First Man” is a solitary journey, and that’s just not possible with all the help Armstrong  had to achieve what he did. These missions, all missions to space, are about working together to achieve something far greater than what humankind could do alone. Somehow the filmmakers lost sight of that reasoning, and not surprisingly it haunts their film.

Even landing on the moon seems more ho-hum than hoo-rah. Yes, it looks gorgeous, but again, zero emotions. And, if you’re not going to show the most iconic image of the moon landing, the planting of the flag, don’t show it in an out-of-focus wide shot. What does that signify? Like the moon itself, there is but a thin layer of atmospheric joy in this entire film.

I mean, sure, America is in a confounding place these days, but if this is a story of what actually happened, then show exactly what happened. That’s another key misstep. We’re asked to believe that Armstrong does something at the end of the film that no one can confirm whether or not actually happened.

In fact, the entire film is actually structured like a house of cards on this event. So, that’s another big, big issue, one that takes liberties, that sure, might have been researched, and his family might have even approved of, but there is no way to tell if it actually happened. And that distrust is a big part of the problem with this effort.

Show, don’t tell. The filmmakers don’t show enough to tell a complete story with “First Man.” If it’s an intimate portrait, okay, keep us in the dark the entire time, and there are beautiful shots that do just that, but when we desperately need to see what’s happening with a rocket, we’re not shown that…they just arbitrarily, stylistically cut to the next scene.

It’s gap logic. And used too much here. And when we don’t really need to see cutaways—like the umpteenth smoke and fire liftoff showcasing the flag or the word “United States” as the rocket ascends—they show it. It’s just not consistent, and thus, not powerful.

It’s really a half-baked film, and rightly delivered a half-baked box office, debuting with just $16M last weekend. No doubt director Damien Chazelle will go on to do many more important films in his career, but this just isn’t one of them. It’s a sci-fi whiplash of a film, that falters at liftoff, and never achieves orbit because it fails to do what all great biopics do: go into the core of the character. That’s a big $70M disappointment.

Rating (one to five whistles, five being the best): Two Whistles

Jeff Bock is NewsWhistle’s movie editor. He can be reached at Jeff@NewsWhistle.com. 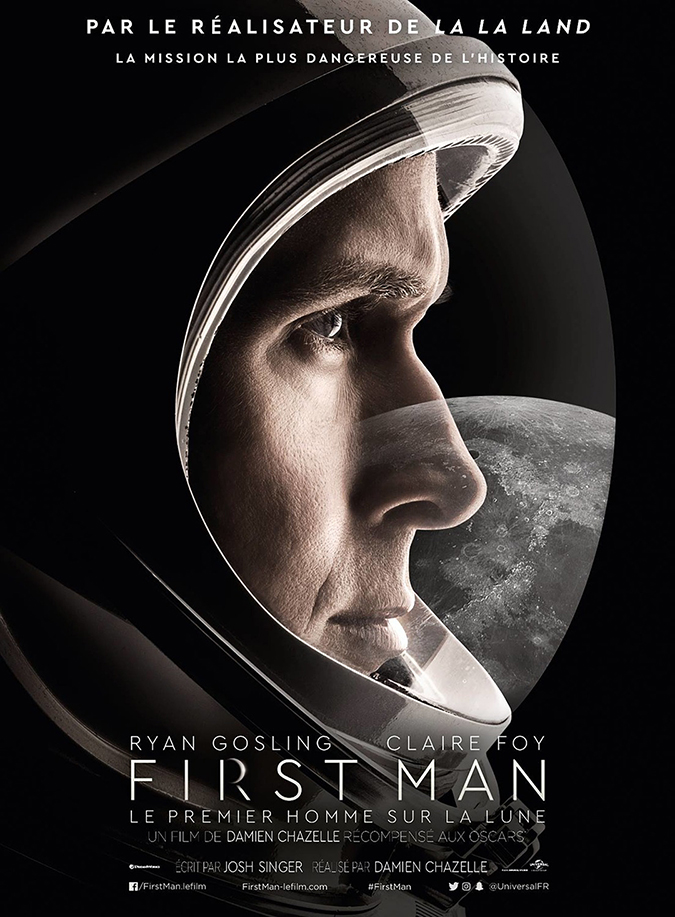