Among the many gifted singer-songwriters out there, only a handful become whispered legends in their own lifetime. It happened to Townes Van Zandt and to some degree to Blaze Foley, though now, decades after his death by bullet, Foley’s rep has nicely exploded into the mainstream, thanks to Ethan Hawke’s bio flick about the beautifully wild Austin songwriter they called “The Duct Tape Messiah,” because of his penchant for adorning his hat, jacket lapels, and boots with silver duct tape.

Legend status has come in his lifetime to Malcolm Holcombe, a North Carolina genius who writes songs that Rolling Stone Magazine calls “haunted country acoustic blues and rugged folk” and it’s happened to R.B. Morris of Knoxville, Tennessee (hometown of novelist Cormac McCarthy), whose music brings you to your feet the way an Allen Ginsberg poem would.

It has come to Gurf Morlix, though what that really means I learned one night in 2016 when I went out to Ashbury, New Jersey to see him, fully expecting to find him onstage at a stadium-sized venue. Instead, he was setting up by himself, in front of the dirty window of a Mexican cantina that could just as well have been in Tiajuana and there were maybe eight people at the bar, three of them there to see Gurf, including me, and the rest just drunks slumped over their shotglass medicine.

Gurf set up as though onstage at the Filmore and put on a show that was as great as anything I’d ever seen, ever, anywhere. After he had sold some CDs we stood outside, where he told me that he’d driven north all the way from Texas, and how, on another long drive to perform in some no-name place he felt a heart attack come on, pulled over on the highway, stumbled over the crash barrier down to a big block chain drugstore, ran in, tore open a bottle of aspirin and downed as much as he could swallow. Then, he drove himself to a hospital where they told him that the aspirin had most likely saved his life.  Gurf was around 65 or so when he told me that anecdote.

David Olney, 71, who died of a heart attack Saturday night while performing in a boathouse at the 30A Songwriter Festival along Highway 30A in South Walton, Florida was a legend among legends. He shut his eyes and died with his guitar in his lap. Townes Van Zandt had said of him: “Anytime anyone asks of me who my favorite music writers, are, I say Mozart, Lightnin’ Hopkins, Bob Dylan and David Olney. David is one of the best songwriters I’ve ever heard–and that’s true. I mean that from my heart.”

He was one of the best American songwriters alive–and I mean that from my heart. The first time I heard him perform live, in a home concert in an East Village flat, the beauty of his songs shocked through me like a blues man’s soul prayer. With Van Zandt, Foley, Holcombe, Morris, and Morlix, Olney didn’t just write catchy lyrics but songs that are actual poetry. In fact, he once published a whole volume of sonnets, his own, a form that is no easy thing to master. Between songs he might quote from the 18th-century poet Samuel Taylor Coleridge. I saw him do that.

The six songwriters I’ve mentioned — Olney, Van Zandt, Foley, Holcombe, Morris, and Morlix–are music’s equivalent of the Beats or the Impressionists: a fistful of musical originals known to each other, who sometimes performed and collaborated, and who, in a time of ever-cheapening cynicism and commercialism have succeeded to produce a revolution of dignity, integrity, sincerity, heart, and talent whose impact has yet to be really grasped, fully understood. They are the true saints of American music.

I knew some of them first-hand and was even privileged, along with North Carolina poet Al Maginnes, to record and tour with the ones who were still alive–Malcombe Holcombe, RB Morris, and, to my amazement, David Olney.

In 2017, Malcolm Holcombe — sponsored by the music producer Brian Brinkerhoff — organized a recording session and performance tour called “The Liberty Circus.” They included Maginnes and me to perform our poetry and music, if we had any. I had some. The proceeds of the tour and CD sales went to the ACLU or any local org that benefited immigrants who were then, and still are, being hunted by the federal agents of ICE. Malcombe’s idea was to use our music and words to defend the helpless stragglers in our midst, the children torn from their parents’ arms, the parents thrown into barbed wire hellholes and once we performed at Hippie Jack’s Sanctuary in Tennessee, to help the folks who live on the mountain without proper food or clothing, except for what Hippie Jack provides. When Malcolm told us that Olney had agreed to join us on the CD and for some of the performances, we were beyond thrilled. He didn’t need to be asked but once.

I flew into Lexington, Kentucky. The others drove in. For one week, we lived in a crazy motel, like something from the mind of Stephen King, and ate at a Waffle House where a bottle blonde waitress took us all in hand and fed us like a momma with grits bowls, Jimmy Dean sausages, buttered biscuits, and black coffee.

We recorded the Liberty Circus CD at Duane Lundy’s Shangri-La studio, known as the “Muscle Shoals” of bluegrass. When Olney appeared (he had driven all the way from Nashville–these guys were like long-haul truckers of outlaw music), the deference he commanded just by his presence was instantly felt.

Among the songs recorded was one of the most moving I’ve ever heard, “Always a Stranger,” about the loneliness of any fugitive in flight from oppression, poverty, war, and maybe because my mother, a Holocaust survivor, had in childhood been a fugitive stranger from the Nazis and fascists, Olney’s song resonated deeply with me.

In recording sessions, Olney was a phenomenon: he sang, harmonized, orchestrated, played guitar and harmonica, and while authoritative about what he aimed for, showed the true artist’s willingness to try just about anything to assure that a song’s possibilities — his own songs or ours– have been fully tested and expressed. Later, on tour, he returned to Lexington and also Knoxville to perform with Liberty Circus in a CD release party, lending his time and gifts to help the strangers of his song.

What was it about his words, his music, that caught your throat? He wrote songs with Guy Clark, Emmy Lou Harris, Van Zandt, Rodney Crowell, and Richard Dobsen. A Rhode Island native, he moved to Nashville, stayed. If there is such a thing as an American voice, he became that. I don’t mean in the filthy way that nationalists do, but as in Kerouac, or Jack London, Bob Dylan, or Townes: a wilderness call, an exalted loneliness throwing the dice one last time with so much broken hope, a solo voice that contains the soul of the dreamers muted by failure who haven’t the words, the blind seekers after beauty, the seeking outcasts who long for home and who somehow understand, as Olney did, that in its essence America is a longing for home–one that we never reach, one that is never really found, we but keep trying for it and maybe some day we’ll even find a Shangri-La beyond the music studio or next book.

And it’s moments, like one song Olney wrote called ‘Wheels & Big Cadillac” about when your luck turns your life into a big joyful Cadillac ride with Lady Luck in your lap. It’s about communing, as Olney did, with the great loves and songs, art, and thoughts of the past. It’s about being a solitary human being of personal principles, yet who needs others, to live among and sing to, and it’s about having a good time, as so many of Olney’s songs seemed to, celebrating, defiant of despair, and most of all, Olney’s America, like that of his confreres, is of giving of yourself until you can’t.

David Olney gave us his genius, his skill, his beliefs, his loves and hates, his time, his life. In performance, onstage, he closed his eyes during a song, paused, apologized, and soon after died.

Goodbye, David Olney. My goodbye is not only mine. It is from all of us. 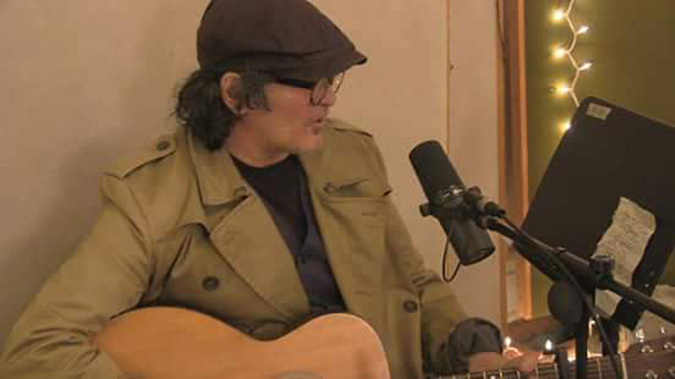 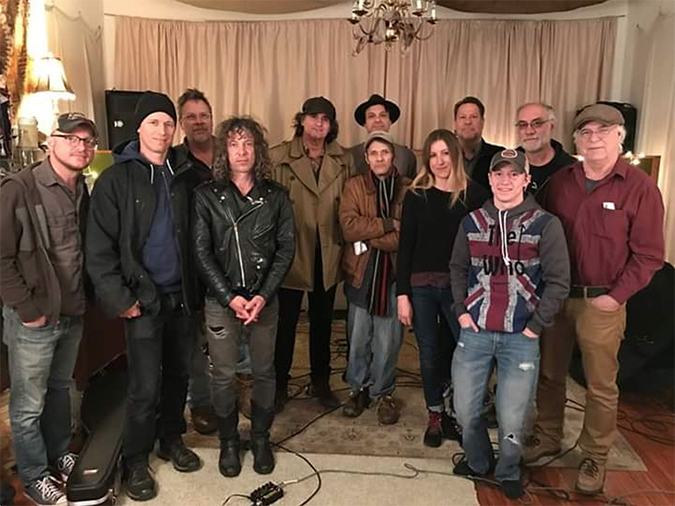 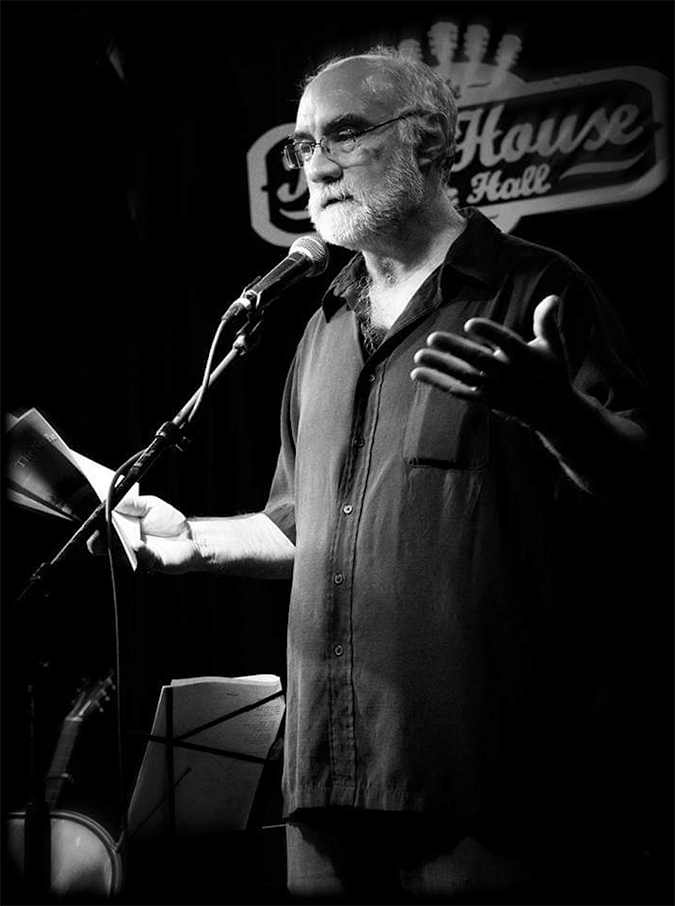 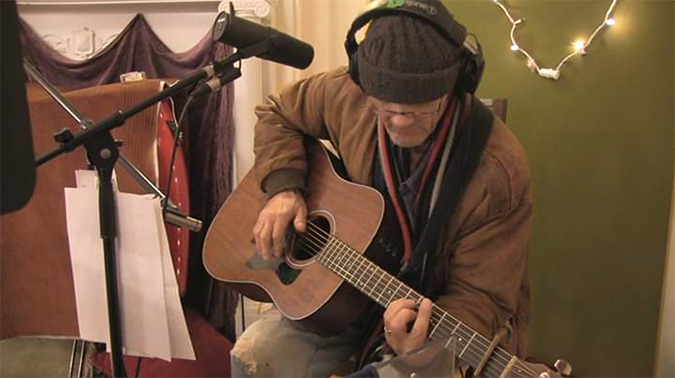 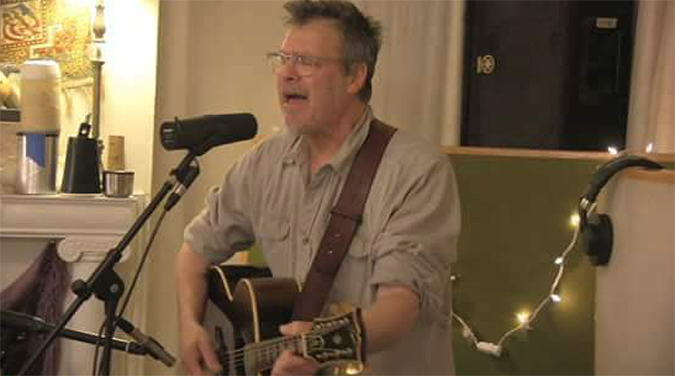 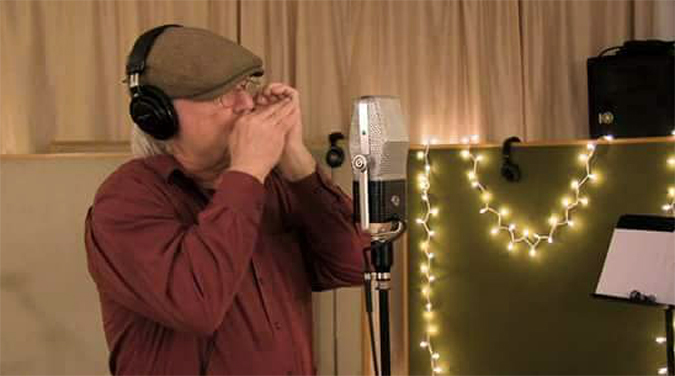 Alan Kaufman’s books include The Berlin Woman and Drunken Angel. He is a member, with Malcolm Holcombe, Al Maginnes, RB Morris and David Olney, of The Liberty Circus.

All images courtesy of Alan Kaufman, with permission.