I met Najaam Lee at Cipriani Dolci at Grand Central Terminal in New York City…as it was during rush hour, it was good to have a (relatively) quiet place to sit and talk. And we had a lot to talk about. Najaam is an artist, and is also an active advocate for people with sickle cell disease. As she has sickle sell herself (she refers to herself and others who share her diagnosis as “Sicklers”), her disease and her advocacy inform her work as an artist, but they don’t define it. She says that her story is not a sad story; it’s a true story. She suffers pain, but it is her reality. And there is a lot more to her than what she suffers.

First, she told me a bit about her art: she paints (oils and acrylics), she draws, and she does video performance art pieces. She is currently working on a series called PAIN, which brings a focus, as she says, down the rabbit hole of pain in her body, to represent it in an artistic way. Her disease is largely invisible; she looks perfectly healthy, and yet she suffers a constant, excruciating pain. Through her story, she is making it a visual disease. She plans to launch in July, and if you would like to learn where to see or purchase her work, you can sign up for her e-mail list on her website: http://www.najaamleeart.com/

She also told me quite a bit about sickle cell. There are many myths and misconceptions about the disease. People in the United States tend to think of it as a black disease (because most people here who suffer from it have dark skin and West African ancestry), but it’s not: it’s a blood disease, and people have sickle cell disease from various parts of the world, with all kinds of different skin colors and backgrounds. It’s found in India, in the Middle East, in Africa, and in southern Europe. Sickle cell occurs in people whose ancestors are from a place where malaria was historically endemic. Being a sickle cell carrier (not having the disease, but having one defective and one healthy allele) is beneficial in that it affords protection against malaria. If both parents are carriers, however, their children have a one quarter chance of having the disease.

Sickle cell is named after the shape of the diseased red blood cells, which look like sickles (or crescent moons or bananas). When the blood cells become misshapen, urgent medical care is needed to deal with the crisis. Besides the chronic pain, which many Sicklers suffer, there are other serious health problems for people with this disease, including the possibility of strokes and organ damage, the risk of serious bacterial infections, and anemia.

Najeem tells me that Sicklers tend to get good care as children in most areas of the United States, but that when they turn 18 they change from receiving pediatric care to receiving adult health care, and systemically, there is nothing in place to help make that a smooth transition. Many people at that age leave for college, or otherwise leave home, and they tend to struggle: that transition period from childhood to adulthood is difficult, and sadly, many suffer as a consequence. Their doctors change, their practices change, they often face a new geographical location and a new hospital, and at that age, many of them are still really not ready to manage the disease on their own. College health centers often don’t know how to handle their care, and there is, unfortunately, a historical stigma about sickle cell disease and a lack of institutional support for those who have it. Many health professionals do not know much about the disease, or how to help Sicklers manage their pain. Unfortunately, then, leaving home often creates a very stressful situation for Sicklers, resulting in more frequent crises, hospitalizations, and sometimes deterioration in their overall health, and a greater risk of death or permanent injury.

Najeem would like to make a difference and there is a lot of work to be done: more money is desperately needed for research for effective treatment. She’s trying to make sure that medical professionals are aware of the illness and better educated about how to take care of sickle cell patients. (She has spoken to Harvard Medical students as part of their training in a class on genetic disorders, to give them a patients’ perspective on the current inadequacies of care in the hospital setting.)

She could put together a walkathon or a charity dinner to raise some money and awareness, but she has her eyes on a larger prize: she and a few friends have started a grassroots Twitter campaign (the S.O.S. Campaign, which stands for “Speak on Sickle Cell”) to get sickle cell disease on the President of the United States’ agenda. Here’s the official hashtag for their campaign, which anyone can use to tweet directly to the President: #SpeakOnSickleCellObama @POTUS

Will they reach President Obama and get him to speak on the disease? If the president talks, people do listen. They’re trying and they’re hoping. And if they don’t succeed with him…well, there will be another president soon.

Here’s (some more of) what we talked about: 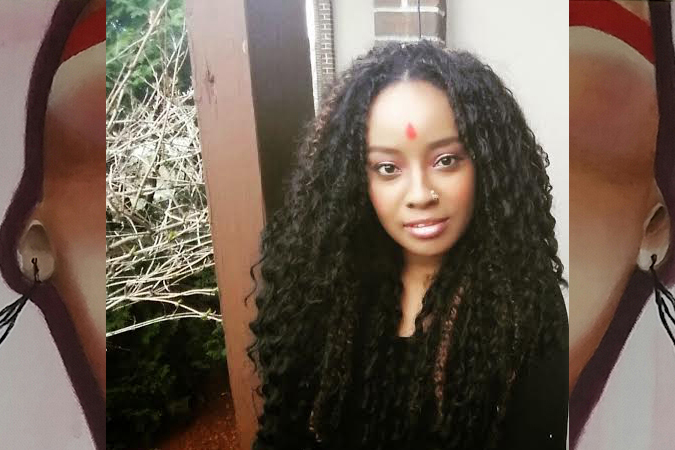 Najaam is a beautiful name.  What kind of name is it?  What does it mean and where does it come from?

Najaam is Arabic.  It is a surah in the Quran.  It means “Bright Star.”

Knowing that you have such a serious illness, does it motivate you to work on your art?

Yes. I know I have to get things done.

When were you diagnosed with sickle cell disease?  Did your parents know they were carriers?

I know that your art work gives you a great capacity to focus your energies to the exclusion of all else.  What are your other methods for managing your pain?

My at home pain management plan: A) When I first get into a pain crisis, I will pause on what I’m doing and get a bottle or two of water or Gatorade or coconut water.  I drink these for hydration and the electrolytes they carry.  B) I will then take my meds and grab a pillow, blankets, socks, sweater, and fully dress to warm my body completely.  C) I then will turn the TV on, or have my laptop near me playing music videos.  I will try and sleep and relax.  I’ll do some meditation and deep breathing exercises.  And I do all this until it subsides.  This can take a few hours to a few days for a high crisis.  If by the third day I’m still in a a lot of pain, I will call my doctor and go to the infusion center for the day for IV liquids and pain meds.  Usually that helps.  Yet there are times that I’m admitted to the hospital and can be there for a week or two.

Your current project is about pain (and is called PAIN) but from what we can see of it so far, your paintings look beautiful, full of nature and timeless images.  Where is the pain in your artwork?

I love this question because that is exactly what I was expecting.  It’s exactly what so many say when I’m in pain.  That is what pain can do, make you look beautiful and full of life.  Until you look a lot closer and you’ll begin to see some things are off.  I love your response!

With so many different diseases and causes competing for attention and money, do you have a persuasive argument as to why supporting Sicklers and seeking the eradication of the disease is so important?  How can you, and how do you, convince others of the importance of your mission?

When we remove the clouds of politics, propaganda, discrimination, and medical injustice from our eyes and minds, then we can see clearly.

It’s not about convincing.  I’m not here to convince you or anyone that we are in pain.  That we live with a painful disease that’s worse than giving birth.  That so many die, not making it to see their 40th birthday.  It’s not a disease floating around like an idea or a dream.  It’s a fact.  It’s real.  I’m living proof.  Your neighbor, or the person sitting next to you in class, or on the train, or your friend you speak to all the time has it, yet you don’t know.  Through my story and the SOS TWITTER CAMPAIGN (#SpeakOnSickleCellObama @ POTUS) we’ve penetrated walls for you to hear our voices and shed light on sickle cell, which opened your heart to help spread this awareness to people and companies who will give to make a secure change happen.  What I have is my story, my art, my voice, my truth, and it continues to rise and shine above the city sounds, allowing you to hear and see my S.O.S call.  Join me.

Why do you like Jane Austen so much?  What draws you to her stories?

I love her stories, how she created worlds with ink and paper.  It’s art.  Her stories helped me escape the pain when I was younger.

I’ve done so many things! In college, my roommate and I showed up to the American Music Awards and walked in. We got dressed up and showed up and we were standing around…and someone gave us a pair of tickets! She said she was just going to go to the after party.

What’s a movie everyone should see?

And talking about movies, whoever made the Lord of the Rings, Part I, they knew what pain was. There’s a scene early on where Frodo puts the ring on, and he disappears so his friends can’t see him. But the evil forces working against him can see him. And he suffers so much and he screams so loudly that both sides can hear him: that’s pain.

There is always another way in. If the front door is closed, there’s the back door. The window. The chimney.

I’m not really into celebrities. But I’m inspired by artists. Especially Warhol, Dali, and Picasso. And I love Tracey Emin. She’s a visual artist and a successful woman, a British artist…she really started her work in her mid 30s. Her work is raw and in your face. I also really admire Kesh. She’s in California, I think. She’s real.

For music, I love Jimi Hendrix.  His music is love through many veils.  I learned guitar through listening to his music.

Nothing really happened this week!

I wouldn’t do anything over. It got me where I am today, so it’s a good working plan.

What has been your greatest travel experience?

Hmmm….I’ve had many.  I think the most in-sync experience was the few days I spent with my daughter on a Native American reservation.  I felt so connected to the animals, the land, and learned so much about myself.  It was a beautiful experience we both shared.

Tell me a joke.

I don’t do jokes!

Yes, my art! You can subscribe on my webpage: http://www.najaamleeart.com/. My new series will be launched in July. 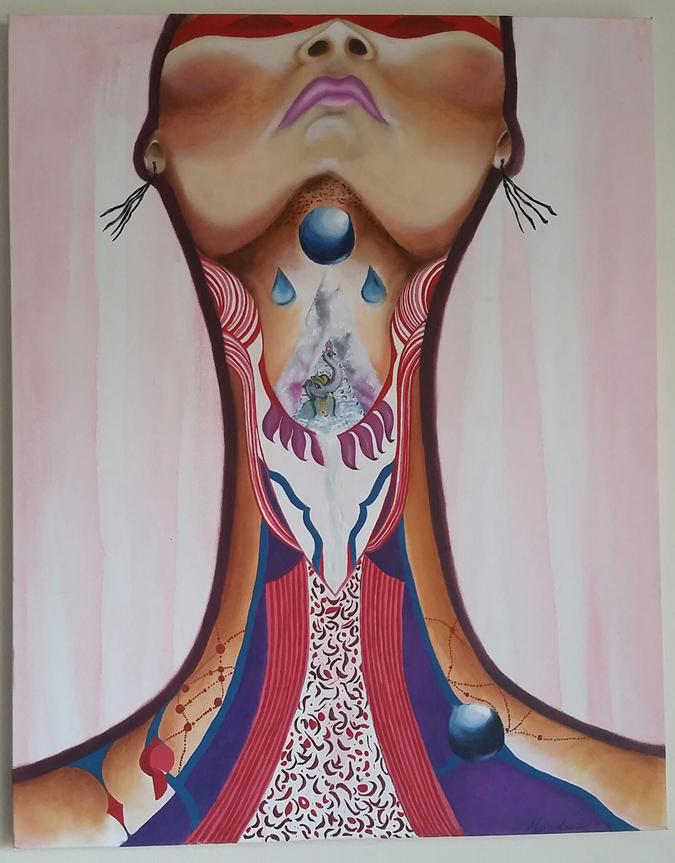