This past fall I took a small group painting class (and believe me, I am not at all artistic) with Chris Mallin, an art instructor who has been teaching people like me (many of whom are not at all artistic) how to paint since 2002. We showed up once a week, and Chris would have everything set up in a comfortable spot with a nice view, and she’d provide tea and coffee (and sometimes treats as well) and gentle artistic instruction.

I still don’t consider myself at all artistic, but with Chris’ help, and the generous use of stencils, I did manage to create two oil paintings on velvet, which impressed both my husband and my older daughter as surprisingly good. (Perhaps they had low expectations!) I am going back to try this again when she starts classes again in the spring, and am planning to move on from bowls of fruit to flowers. In the meantime, Chris and I caught up over lunch at Martel Restaurant (a rather good local bistro), and she kindly answered all of my questions about her specialty and method, which is known as theorem painting. Here’s what she had to say: 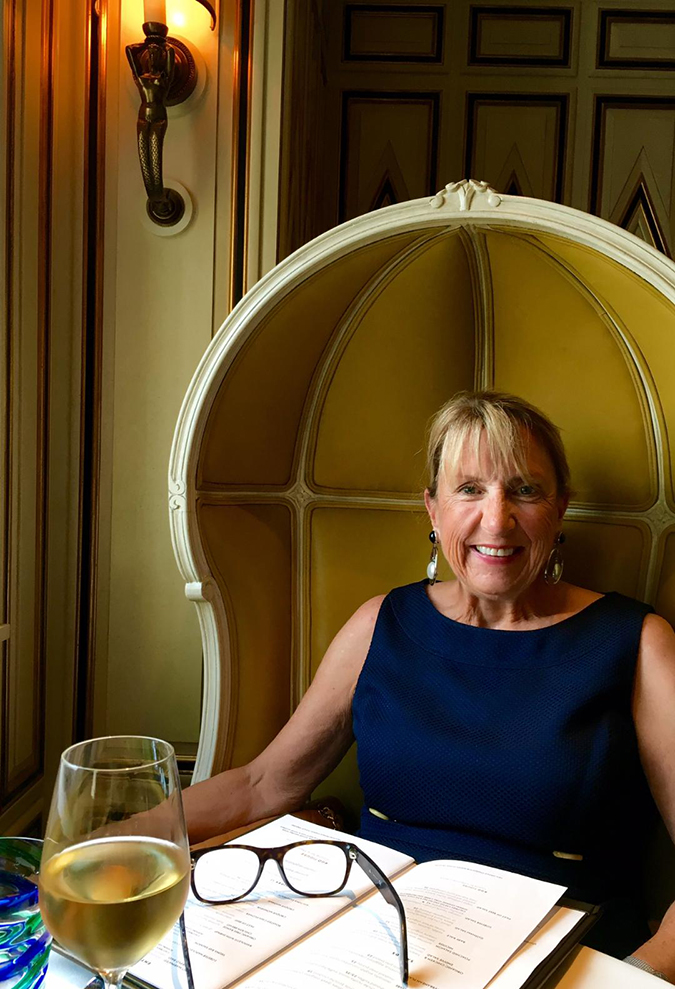 Current town: Fairfield, Connecticut (or as I like to call it, Bedford Falls)

What’s your “elevator pitch”? How could you briefly describe theorem painting?

It hearkens back to math class and student theorems and algebra. With theorem painting, given stencils A, B, and C, when you complete them, except for a little bit of the “glory work,” you have a complete oil painting. You don’t need any prior training. People say, “I cannot draw a stick figure.” And that’s the least of my problems!

So, would you call it decorative art? Or folk art? Or some combination of both?

It’s both folk art and decorative art. You can see it at the Abby Aldrich Rockefeller Folk Art Museum in Williamsburg, Virginia. There was a resurgence of interest in the art form in the 1970s and 1980s. So it went from a lot of paintings of tired looking baskets of fruit and damaged-looking sheep into more of a range, with a crisper, botanical look.

This seems very different from some other popular ways to create home décor, like “paint by numbers” which was popular in the 1950s and 1960s, as it seems to be a bit of a “gateway” to making other kinds of art. Is that a fair assessment?

Absolutely, that’s perfectly correct. It’s in between paint by numbers and the empty canvas. And an empty canvas is daunting, it’s too much for a beginner. I’d taken painting classes in high school and college and found myself not succeeding. I wanted to make something lovely, and that wasn’t the goal in the 1960s and 70s. When I took a theorem painting class—it was the bridge.

The best thing about it is that it teaches you to see the rest of the world as a two-dimensional surface. There’s nothing you can’t do. If you can see it, you can paint it. No more hoping for a lucky mistake!

It’s a jumping off spot, a platform to begin, it’s not the end. There’s more from there, learning more about color, themes.   And it’s erasable. You can white it out, paint right over it, and fix it. There are no intractable errors. My students have taught me that. 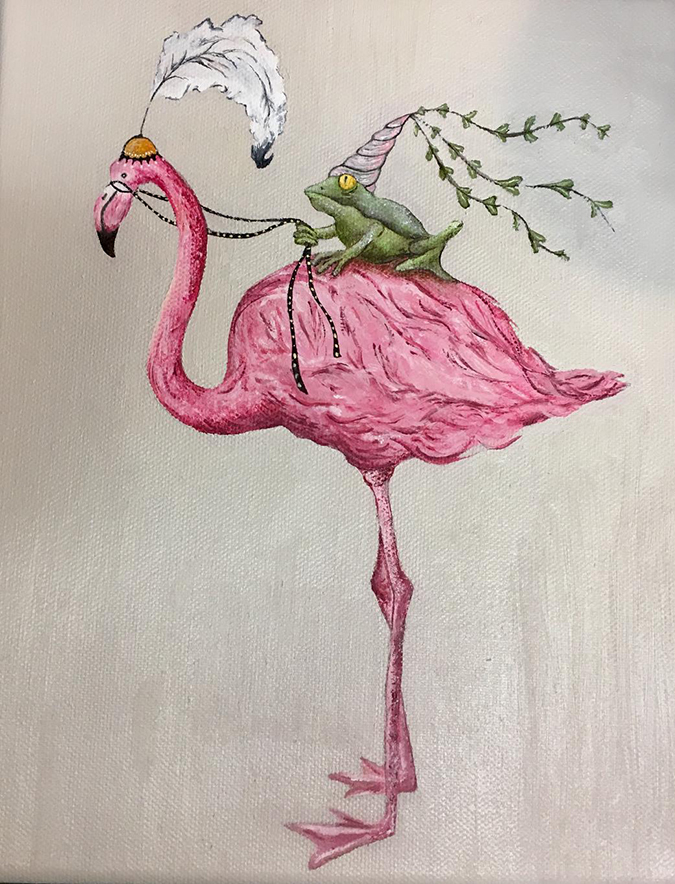 One of the things I thought about when I first saw your theorem paintings and how you teach students with the method, is that this was the type of thing that would be considered an accomplishment, like piano playing and proficiency with languages, in old romance novels. I tend to associate this sort of thing with Jane Austen and even later English writers like Wilkie Collins…was this also part of the marriage market in America?

It became a thing in America in the 1800s, with wealthier people. They would send their girls to finishing school, and they would learn to play the piano, embroider, set the table, and do artwork suitable for a young lady.

You’d think it would be in Henry James or Edith Wharton, although I can’t remember a specific instance in American literature.

Was this largely an American phenomenon, or was theorem painting, or something like it, done other places?

There have been similar things done since painting began–since people first traced their hands on the wall in a cave. The Caves of Lascaux has one of the the first stencils of a human hand. Rug making, setting some particular stones in a table, these artistic practices are all about using patterns. Michelangelo used a pattern to put figures on walls. 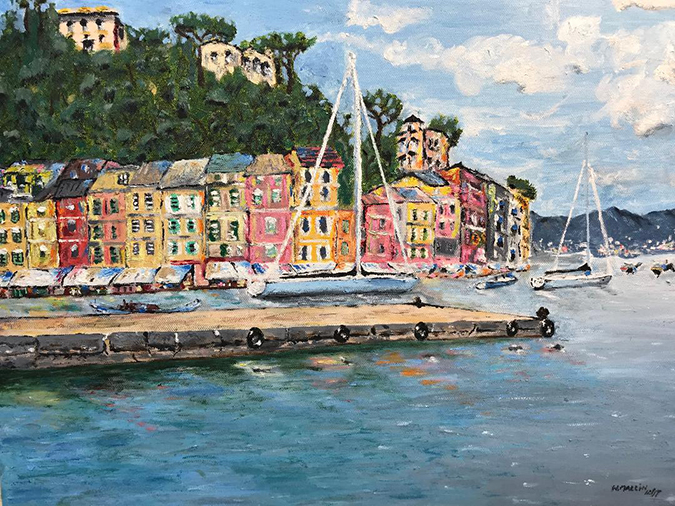 How did you first learn this method of painting? And how to teach it?

I went to the house of a coworker of my husband’s and in her kitchen was this painting of a basket of strawberries. I asked her about it and she said, “I made it, and you can, too.” So I took a class in theorem painting, and I became friends with a woman with a stenciling business. It was in the 1980s and stenciling was popular in the home. Then she went back to work full time, and the idea of doing stencils in kitchens or sponging walls all day just was not fun, so I then specialized in room murals. That way, there’s no repeats.

I eventually priced myself out of mural painting. I wanted to say something. I needed a vocabulary to help someone create something beautiful. So I started with my art classes.

Are there other people locally, or elsewhere, that you know of, that are doing and teaching theorem painting these days? I couldn’t find much information online; theorem painting doesn’t seem to have a Wikipedia page, either!

I’m not sure! There is a Wikipedia page, but it has only a few sentences. [I found it…it’s under Theorem Stencil—but there’s really not much there.]

Other people are doing it, but I don’t know much about them. I don’t know if it’s regional, if it’s a New England-y thing. Different artists do have websites and they sell stencils and their finished products. Part of the process is for the artist to create the stencils, though, for me, so I haven’t really investigated what other people are doing.

Good supplies can be challenging to come by. Velveteen no longer comes from Japan, not for the last eight or nine years. It’s from China now, and it’s not made as well. They do have brighter colors, but the quality of the material isn’t as high. It’s fine, it’s adequate. And it’s a stepping stone toward a canvas.

Can you tell me some more about materials and their importance?

Oil paint. You can thank Napoleon for oil paint in tubes. He had an edict: feed my troops on the move. Which led to the need for preserved food and the technology for making containers. A tube of paint that we take for granted now…artists used to use a mortar and pestle, they used their particular ingredients and then you couldn’t save your paint. They didn’t have Tupperware! They did sometimes use pig’s bladders tied with a string.

That reminds me of the Little House books…I think they made a balloon out of a bladder somewhere in there!

Staples are another thing, to attach a canvas to a frame. Before, they used nails. And the nails were manufactured by hand. We take these things for granted, and most people don’t know the history. 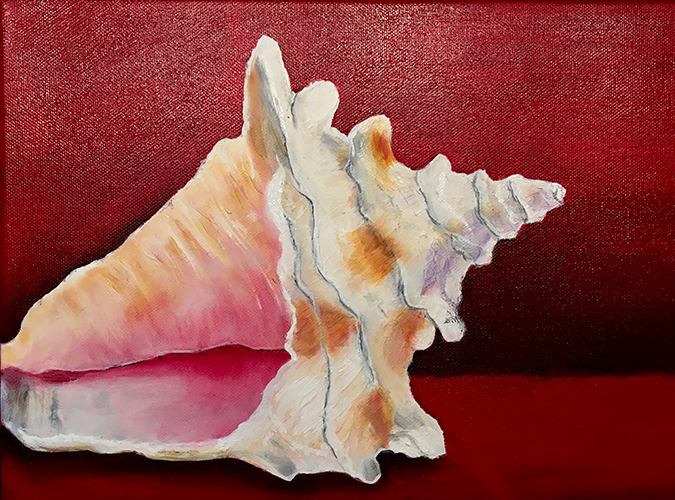 What kind of work have your students gone on to do from this starting point?

People come in with an interest in trying something new. People want to add something of interest to their life. Some have gone on to sell their paintings. They work with me for six months, or five years, or 16 years. You decorate your house, you give gifts. Some have a talent. It’s hard to make a living painting, though…you have to make a whole lot of paintings!

Has anyone ever just not been able to do theorem painting, in your classes?

No one fails. I’ve had people who weren’t interested or decided it wasn’t for them, but no one who just couldn’t do it.

There are no mistakes! If you make your grapes orange…well, they become kumquats!

If you drop a brush on velvet, just cover it up with moss or butterflies. You can always fix what becomes a fortuitous error.

I’m absolutely positive that anyone can do this. People have phones, schedules, to do lists, tasks, and in the two or three hours they’re with me, I see people relax and their shoulders go down.

Sometime after a number of theorems in my art class, they decide to paint on canvas. But you can paint on a box, on a tray, on a table, on the floor! Put the sky on a ceiling. Make a mural, a compass rose. You can incorporate (more historically used than now) tin foil. Or glass. Artists use whatever is new and whatever they have.

Are there other types of now somewhat obscure folk art that you’d like to see come back?

There may be. I have a nephew who is a farrier: he makes horseshoes. There are a lot of these types of crafts: metalworking and metal sculpture, leather tooling—making belts and purses. And marquetry: making wood in a pattern. And people can do embroidery and needlework on t-shirts and jeans. The question is, how can this be embellished? Flower arranging. Something humble can be made to be beautiful.

Who are your favorite visual artists?

David Hockney. Georgia O’Keefe. Edward Hicks—I love Peaceable Kingdom. Also anybody who can paint a human face! And Albrecht Durer, his hare and his amazing drawing of a clump of weeds! Nothing can improve upon what nature brings us. 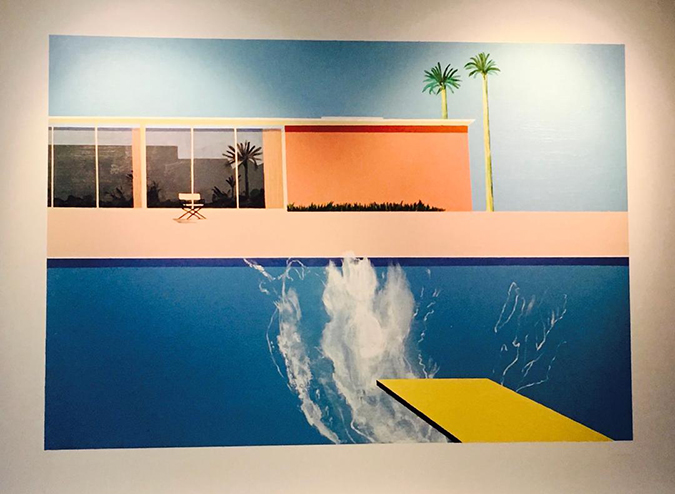 Chris’ own take on David Hockney

Is there a book about visual art that everyone should read?

Yes, Found Objects: A Style and Source Book, by Joseph Ruggiero. It’s about objects repurposed for an artistic endeavor.

How about a work of fiction?

I loved A Man for All Seasons, which is a play. Also And Ladies of the Club…the currents of lovely and lucky people, it’s a privilege to read of this richness in a small town. And I love The Elegance of the Hedgehog. And The Dechronization of Sam MacGruder, a book about time travel.

What is your favorite movie?

Casablanca. And then I also love Lilo and Stitch. “We are small and broken, but we are good.”

What is the best advice that you have been given?

Get cracking! That’s what my grandmother would say. She was my sun, moon, and stars. She was always doing something. She was awesome. 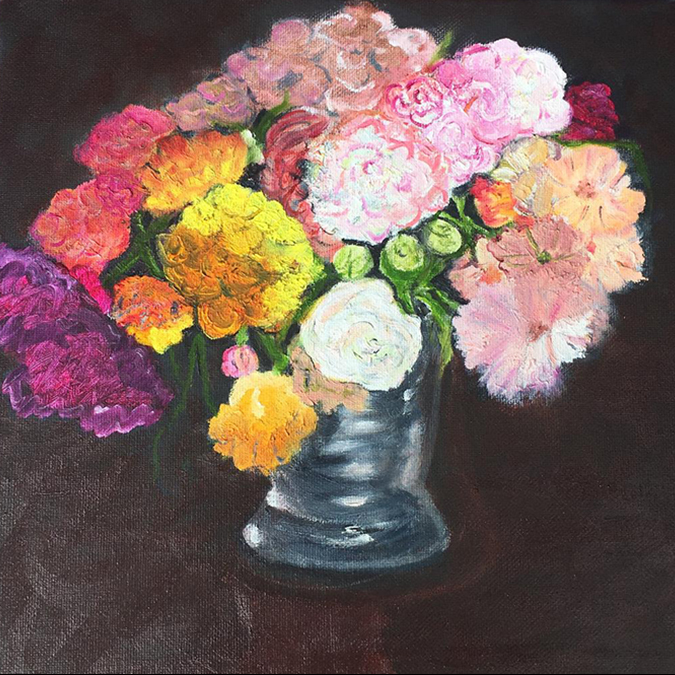 Maybe I would have been a little more casual as a mom. Enjoying the kids more for what they are.

I’m really shy in front of groups. But not in art class. I’m focused there.

Who is your favorite celebrity?

Well, I find certain people on the screen delightful. Nathan Lane: as a mother, I model myself after him in The Birdcage.

Last but not least, is there anything else you’d like to pitch, promote, or discuss?

Theorem painting! People who are interested and local to me should give it a try!

Laura LaVelle is an attorney and writer who lives in Connecticut, in a not quite 100-year-old house, along with her husband, two daughters, and a cockatiel. Her stencil painting is below: 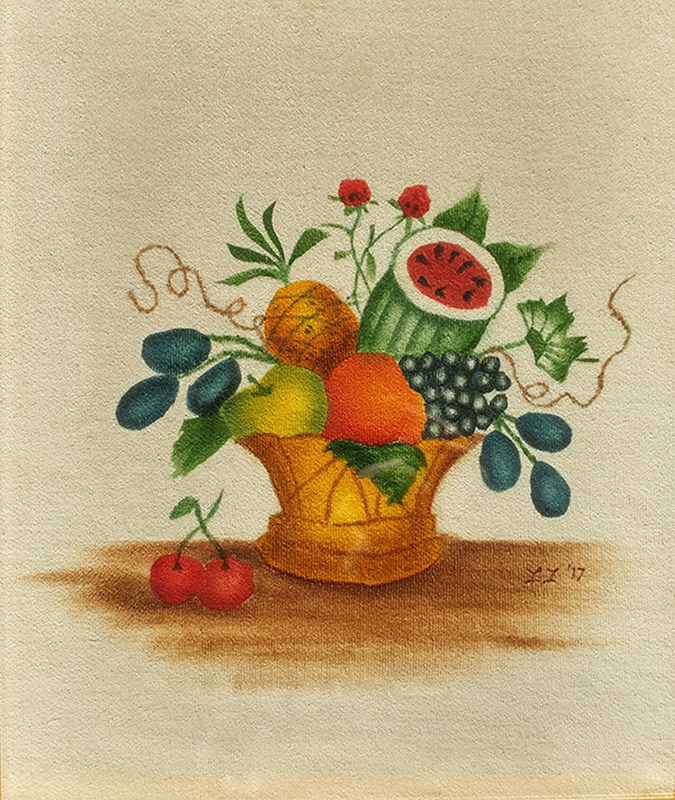 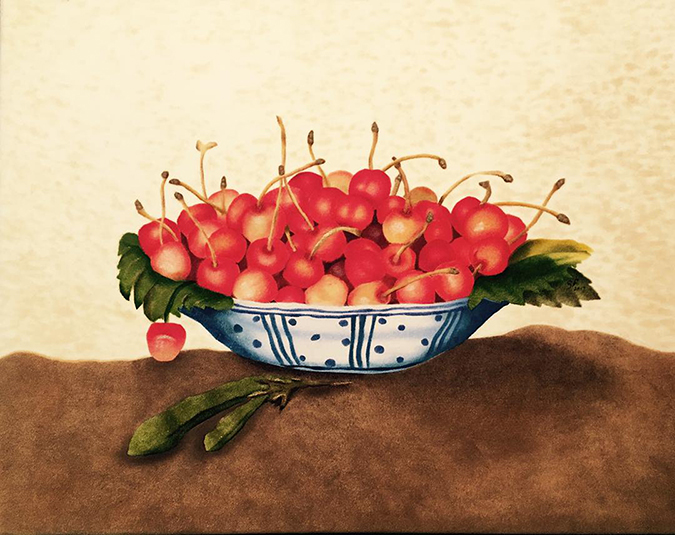 Student artwork from Chris Mallin’s studio. According to Mallin the stencil was “taken from a painting of gouache on vellum by Giovanna Garzoni in 1620.”