Carrie Roble says that no matter where she is, she is at home in the water. She spent summers growing up swimming in the Great Lakes. While attending college in Maine, she was the captain of Bowdoin’s swim team.   She’s been an ocean lifeguard in Los Angeles, and a scuba diver in Western Australia. She has an M.S. in Aquatic Science and Environmental Justice, and in NYC she’s busy trying to connect people and communities to their waterways. I asked her to take some time to tell me about the Park Over Plastic program she’s been working on in Hudson River Park, and she kindly agreed. Here’s what we talked about: 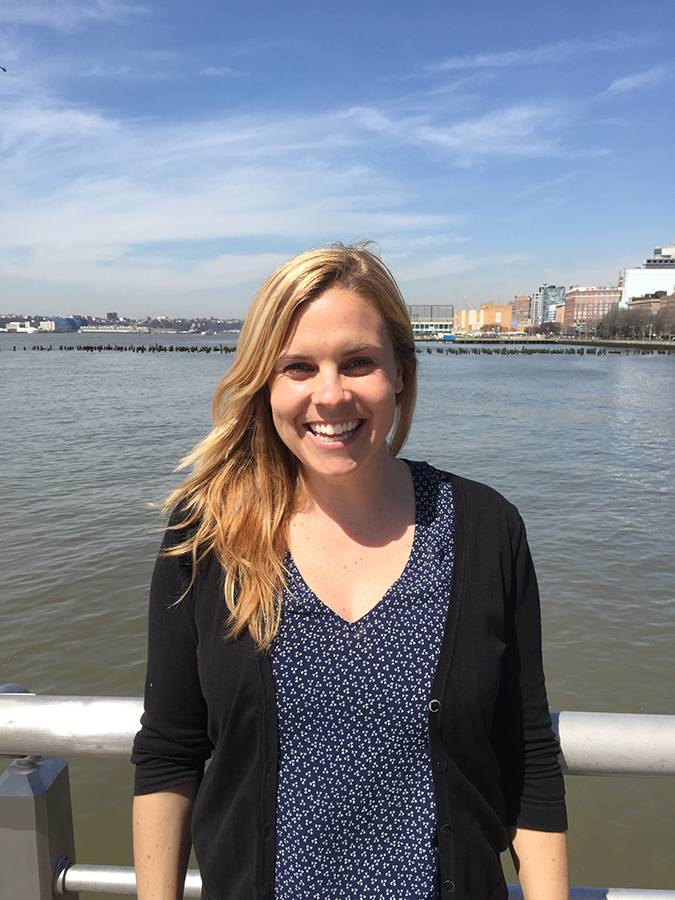 Thank you for taking the time to talk with me about Park Over Plastic.  What’s your “elevator pitch”?

Park Over Plastic is a park-wide initiative to change habits around plastics and reduce their use.  We’re changing our operations and partnering with our tenants to be proactive about eliminating single-use sales of plastics.

What’s really neat about it is that it’s a project founded after three years of work by our Estuary Lab, researching microplastics, studying plastics on our shoreline, and teaching students…all of this research and education is creating a conversation about the problem in our local community and enabling us to be a leader in reducing plastic pollution.

What has been the response so far?

To make it successful, we need tenants to volunteer to be our partners.  This winter we started making calls, having discussions about switching from plastics to alternatives.  In general, the spirit has been positive, people are on board to make changes.  About half of the park tenants have signed onto our green partnerships, and others are working towards it but they are still working out their logistical challenges.  But everyone wants to respect our waters and green spaces.

I am happy about that.  Change is hard.  What’s been helpful is that there’s been a lot of dialogue in the media lately, and in our park, we are working on this ourselves. We are working to reduce our own plastic use, we’re making changes as well.  We’re providing resources and information to reduce the burden.  And some of our tenants are really fully on board: Grand Banks, the Frying Pan, the boathouses, Blazing Saddles (that’s a bike group).  There really hasn’t been any negative feedback, just support.  They’re all with us in spirit and we’re making steps.  And since we launched Park Over Plastic, Battery Park has reached out to us, they want to make similar changes.

What are the biggest problems with plastic that Hudson River Park currently has?

Water bottles are big.  But there’s also all this recreational use.  People come to the park to eat lunch and then we get take out containers.  They’re here for celebrations and then we get balloons and other birthday stuff.  And prior to this year, a lot of foam, but New York City has banned it this year and is working to eliminate its uses.  At our sports fields, we end up with a lot of plastic bottles, from sports drinks.  We also have a lot of special events, there’s a diversity of things happening in the park.  These are interesting problems to help solve, though, thinking through how people use the park and how we can make changes.

We are giving people a green space resource guide, and it’s a living document.  We will update it based on needs and changes in technology.

In restaurants there is plastic all over the place: plastic utensils, plates, straws, cups.  But there are plastic alternatives.  They’re a little more expensive but can support the health of the waterway. 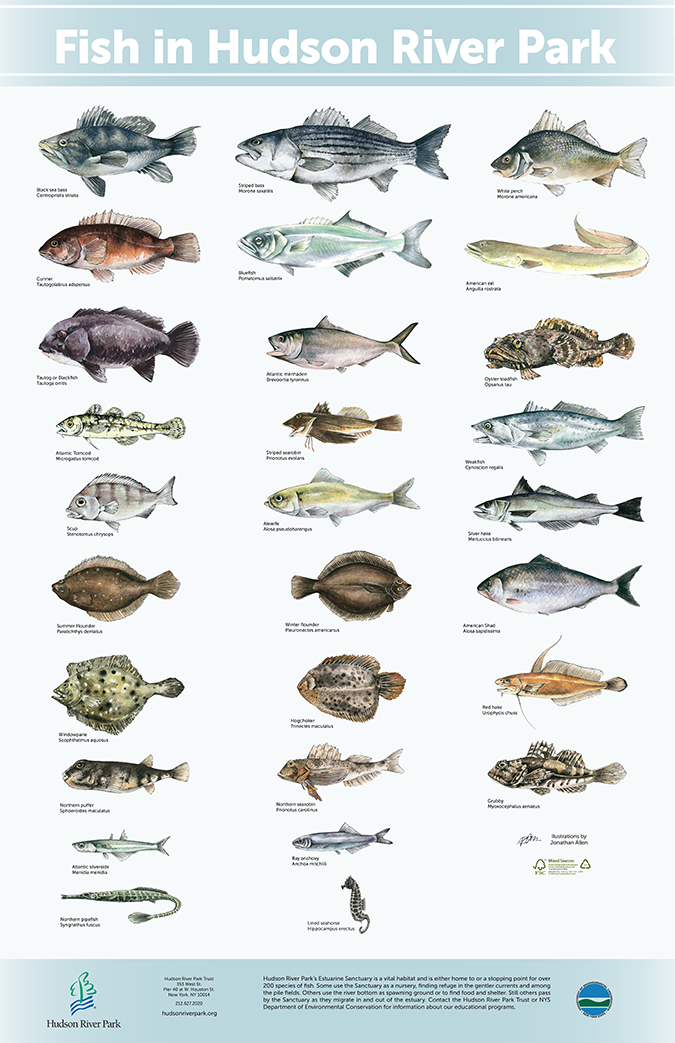 Is anything like Park Over Plastic being done in other places?

We did some research on plastic metrics, there really aren’t a lot of public parks taking this kind of initiative.  There are some commercial parks, like Disneyland, making changes. And cities, like Berkeley, which is a big leader.  And California, as a state, banned plastic bags.  The UK is also a leader in plastic reduction.  Public policy becomes an important piece in making changes.  But we can increase awareness and do what we can to encourage large scale change.  We are four miles long and have 30 tenants, so what we do is larger than something on a personal scale.

I remember a quote from President Obama,  “… we can’t solve global warming because I fucking changed light bulbs in my house. It’s because of something collective.” And he was making a good point; we can’t look at large problems like they are a matter of mere personal responsibility or individual choices.

Yes, we are working on coordinated messages, and action. Park-wide participation is the goal and we are working to get the message out about the connection between the park and the water. This is about changing habits and our community can be a part of that.

Is there a book or a movie that you recommend for people who want to learn more about plastics, parks, or both?

There are some movies, short films. We are doing a screening of a Cafeteria Culture movie called Microplastic Madness. It’s about the Red Hook community in Brooklyn, where an elementary school did a plastics curriculum. We’re showing excerpts here.

And our colleague Lizzie Carr (in the UK): we partnered with her last year when she was doing a stand up paddle boarding project, doing microplastics trawling. We processed samples that she collected in NYC. There’s a documentary about it called The Hudson Project, with a June 5th premiere. There will be a screening at the SoHo Patagonia store.

There’s also a good podcast called Science Vs, by Wendy Zukerman. Her microplastics episode is great. (And I’m in that one!) She talks about this iconic video of a turtle with a straw up its nose, and talks to the scientists who found it, and about how it got loads of public attention.

And there’s an animation called The Story of Stuff.

I’ve seen that one!

It’s a reminder of how consumerism worsens environmental issues.

Plastics are incredible materials and they do serve important roles. When they were developed in the 1950s, it was a cheaper way of doing a lot of things: hygiene, packaging, etc. But we need a new business model. The burden of waste shouldn’t just be on the consumer. We people have to remind ourselves that we do have power, it is important to keep that in mind. 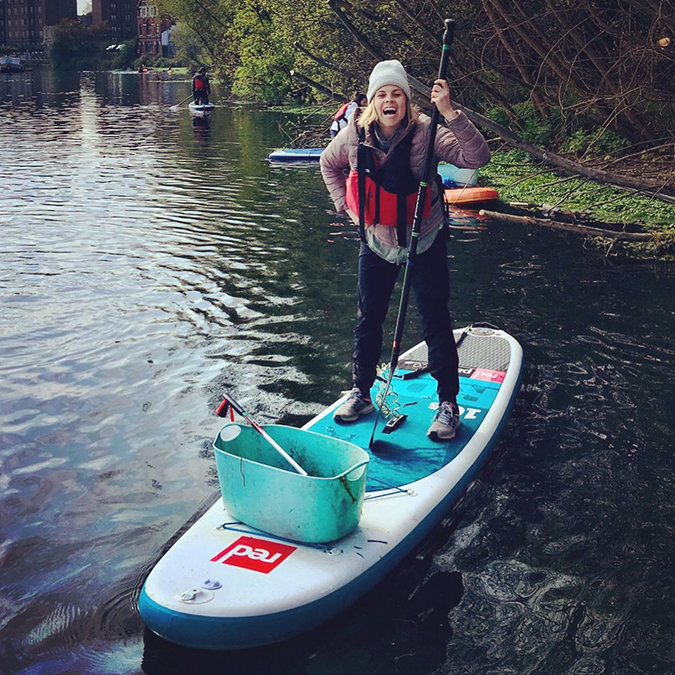 In connection with this project…the power of people when they come together is amazing. The secret weapon here is making relationships. This project is leveraging the collective.

In work and in life, good advice is to be good to your people and your community and to listen to them and understand them. That makes your work more effective and impactful.

If you could go back in time and redo something what would it be?

That’s not a way that I really think!

I am a forward-thinking person. We have agency to shape our stories. I give meaning to where I want to go and to serve the people in my life. I can’t point out a huge thing I would change. I like to say yes and do and be in the world. I try to embrace that, to be more fully me in work and day to day life.

Is there a book that everyone should read?

My favorite book is Their Eyes Were Watching God.

That is a really good book.

There’s an incredibly inspiring protagonist. It says a lot about today. Nora Zeale Hurston: people should know her!

I have a collection of her writing and its title is a quote from her, looking at photos of herself: I Love Myself When I am Laughing…and Then Again When I am Looking Mean and Impressive. It’s a great title! (And a very good book.)

Oh, I haven’t read that—it just came out, right? A slave narrative she worked on, wasn’t it?

Yes, the last surviving individual who was part of the slave trade. It’s so powerful and honest.

I will have to read that one. Thank you so much for your time and your thoughts! 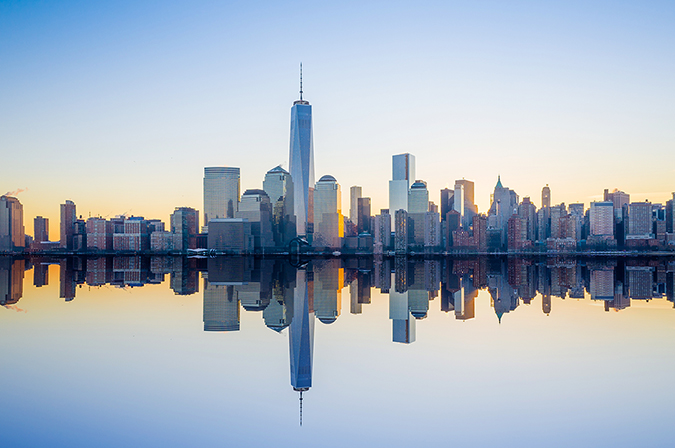