Vin Diesel’s character Dominic Toretto famously said: “I live my life a quarter mile at a time…for those ten seconds or less, I’m free.” Apparently, Paul Walker took these words from the silver screen to the streets, and lived his a bit faster than that.

On Saturday afternoon, November 30, after a charity event in a business park area of Santa Clarita (just north of Los Angeles), he and a friend wrapped a 2005 Porsche Carrera GT around a tree, burst into flames and both of their lives faded out much too soon.

No word yet on the exact cause of the crash and whether it was mechanical failure or human error, but one thing is for certain: they felt the need for speed.  The sheriff department has confirmed that speed was a factor and that Walker’s buddy and car-enthusiast Roger Rodas was behind the wheel.

Like any major celebrity news these days, it was TMZ that first reported Walker’s demise, as a buddy of mine text me and told me to go to the site.  Love ’em or hate ’em, TMZ is usually right when it comes to juicy gossip, and unfortunately, this sad story was soon confirmed by many news outlets.

We all have those “Where were you when ____ happened?” Or had a weird premonition or dream just a day or week before whatever happened actually went down.  Mine is pretty short, but still a bit spooky and worth telling.

My buddy and I happen to be at Target late into the night on Charcoal Thursday, half-looking for deals, half-people watching. Eventually, we were sort of relegated to the DVD section because there was really nowhere else to stand and not get trampled by crazed TV shoppers.

While we rubbed elbows with Camarillo’s (30 minutes west of LA) finest fanboys, who were, if memory serves, engaged in a heated discussion regarding X-Men and how “X-Men: Days of Future Past” was going to destroy the sacred lineage of the franchise in the same way Han shooting first changed “Star Wars” forever, my friend pointed out one film in particular: Paul Walker’s latest, “Vehicle 19.”

He asked if was ever in theaters. I said no, that it never had a theatrical release, and we both sort of chuckled, but both agreed it should go to the top of our queues. That’s the only film we talked about that night, and soon after, we both left empty-handed because neither of us wanted to wait 45 minutes in line to buy a new Furby Boom that was apparently a steal at $45.

Anyway, check out the back cover of “Vehicle 19” and tell me that doesn’t give you the chills. Truth is always stranger than fiction, friends. 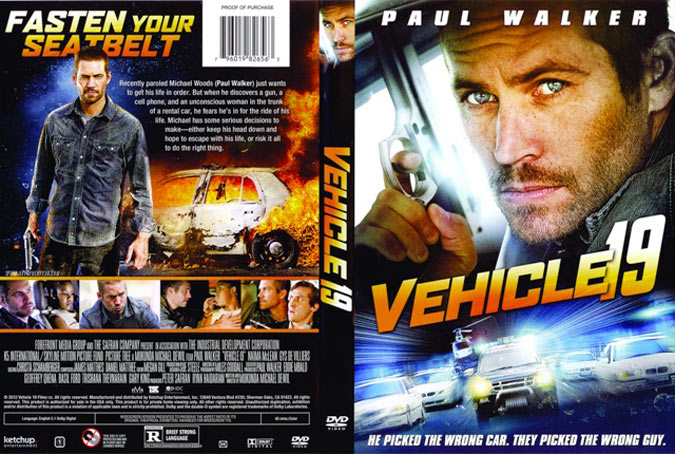 Make no mistake, Paul Walker’s real-life ending turns his career into Hollywood lore–An actor who shot to fame as a white-knuckle street racer in the “Fast & Furious” flicks, which are known for insane street-racing stunts, perishes in horrific car accident. It’s so unbelievable that it would probably be rejected by every studio in town.

Bottom line, this is just an awful tragedy. But it’s also where things get a bit tricky in the world of a $2.6 billion dollar franchise that is just hitting cruising speed.

Hell, no one expected this series to be seven films deep. Diesel dropped out after the first one, and Walker exited after the second.  After Universal took the third film, “Tokyo Drift,” out of the country, the series was basically one downshift away from straight-to-DVD.

Then something quite extraordinary happened: Universal hit the NOS button.

In 2009, the fourth film, a streamlined “Fast & Furious,” brought the original team back together, and they had their biggest checkered-flag finish yet grossing $363M worldwide.  Two years later, “Fast Five” lapped that total with $626M in global grosses, and this past summer’s “Fast & Furious 6” surged to an eye-popping $788M.

Firing on all cylinders, and churning out more horsepower than ever before, the “Fast & Furious” franchise has been breaking all the known rules about sequels and the laws of declining box office sales. Instead of decelerating, the series is revving up not only fans, but critics as well, and most importantly, cash registers. It’s without a doubt the studio’s most important live-action franchise.

And then Paul Walker dies. And it’s not like it was cancer or a heart attack or something more natural…it was a fiery car crash in a cool-ass car.  Alanis Morissette obviously knows nothing about irony. All of which makes the next move for Universal so important.

As of right now, the seventh film in the series is still set for July 11, 2014, but it’s unclear if Universal can or will meet that date. Currently, it’s the only major film set for that weekend.

Word on the street is that shooting has been going on since September, but many of Walker’s key scenes were yet to be filmed. So they either do a substantial rewrite and move forward, or scrap the film entirely and start anew.

I’m going into pragmatic mode, so forgive me if this comes off as a bit insensitive, but as a box office analyst this is part of the job. Walker dying will undoubtedly make “F&F7” the highest grossing film in the franchise. And there’s no chance Universal is going to walk away from that. The only way I could see that happening is if Diesel and the other stars and filmmakers simply can’t continue.

The old adage in showbiz has always been…the show must go on. I’m pretty sure Walker’s family will eventually come out and say: “Paul would have wanted them to keep going.” Something like that, and they will finish what they started. Besides, work is cathartic, and while there may not be a “F&F8”–or “Fast Infinity” as I hope they’ll call it–they’ll probably come together as a group one last time and heal together while completing “Fast & Furious 7.”

Universal’s official press statement is very telling in itself.

‘Right now, all of us at Universal are dedicated to providing support to Paul’s immediate family and our extended Fast & Furious family of cast, crew and filmmakers.   At this time we feel it is our responsibility to shut down production on Fast & Furious 7 for a period of time so we can assess all options available to move forward with the franchise.  We are committed to keeping Fast & Furious fans informed, and we will provide further information to them when we have it.  Until then, we know they join us in mourning the passing of our dear friend Paul Walker.’

Read between the lines here. The key words are: ‘move forward.’  Universal is not putting the brakes on, merely figuring out a correct course change that will not only pay tribute to Walker, but keep the franchise on cruise control.

I don’t fault Universal for this; it’s a corporation, not a person. That company has many mouths to feed, and brings a lot of people joy with this series; it’s just unfortunate it had to come to this.

Like James Dean, Brandon Lee and Heath Ledger, Walker certainly departed terra firma before he should have and each left the release of their final films in limbo. “Giant,” “The Crow,” and “The Dark Knight” all went on to be hits after the dust settled, and so too will “Fast & Furious 7,” I believe. Eventually. Fans need to pay their final respects, and even though most of us didn’t actually know him, we all brought him into our homes, and shared a level of intimacy that is hard to let go of.

At least Walker left us with a lot of films to watch that will always put a smile on our faces. Ladies, back me up on this one, you can’t not like his boyish charm and his chiseled features–like Paul Newman he was the epitome of cool, California cool in this case. Born and raised in the Los Angeles area, he was your typical Cali dude that made good.

Look, no one is talking about how great of an actor Walker was. Let’s be honest, he came from the Keanu Reeves school of acting, where less is much, much more. And like Keanu, in certain roles, he was perfectly cast.

But what really came out after his untimely death was what a generous spirit he was and what a great friend he was to the people that knew him.  And that should always trump any of our accomplishments in life. That should always be the ultimate goal of life since none of us get out alive in the end anyways. As The Little Prince said: It is only with the heart that one can see rightly. He had heart in spades, it seems. RIP Paul Walker.