I met Simeon Bankoff for drinks (more than were strictly good for us), oysters (you can never have too many), and crabcakes at the Grand Central Oyster Bar (which first opened its doors in 1913).  Simeon is the kind of person who can tell you all about the Guastavino tiles on the ceiling (and who Rafael Guastavino was, and why he’s important).  He is also a mixologist of some talent, and a lover of music, film, art, basic black clothing, and all manner of fine things.  He’s one of the people trying to keep New York City special, in his efforts to preserve what is historical, unique, and beautiful here.

The latest big win for historic preservation in NYC was the New York Public Library’s abandonment of their controversial plan to renovate the flagship library on 42nd Street (and remove the stacks to New Jersey).  But there’s always another battle to be fought (and sometimes won)… controversy is now brewing concerning the Frick Museum’s expansion plans and some alarming potential construction which would obscure the beauty of the Cathedral Church of St. John the Divine in Morningside Heights. 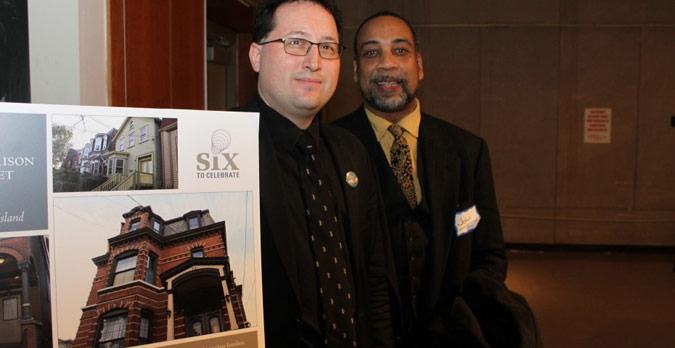 On a professional level, hearing that a community group was organizing against the proposed expansion of the Frick Museum on the Upper East Side and without hearing anything else, predicting aloud to my staff exactly who was behind it and their stated reasons for opposition.

The next day we got a call from them and it was exactly as expected; so, both funny, and sad.

(It should be noted that we largely agree with their entire position.)

What’s your favorite movie?  And why?

The one I come back to again and again is The Usual Suspects, because it plays with the notion of perceiving an underlying order to the world.  The lead character, played by Kevin Spacey, tells the cop a story of a mythical criminal mastermind; the cop rejects the story outright, and then it turns out to be true.  Or does it?  The more you examine it, the more uncertain you become until you’re only left with your own pre-conceived notions.

I could also talk for hours about The Sure Thing and how it matches up with It Happened One Night, or about teen movies of the 1980s generally…

I’m not a risk taker by nature, or perhaps I don’t see things as risky that are.  But I’d say going to Sarah Lawrence College, a small and very expensive liberal arts school, and meeting people of a different social class.  I was a smart kid from Brooklyn, coming from a math and science public high school; it was quite an education.

Two pandas are in the bath, and one says, “Could you pass the soap?”  The other says, “No soap, radio.”

Why would I tell anyone?  I have a reasonably constructed public persona…it’s out there.  But, I actually do own some clothing that is not black.  A few t-shirts.  (I don’t wear them.)  And some pajamas.  And I have some colored ties.  No one ever minds that Batman wears the same thing all the time.

Write it twice.  Send it once.

Captain Sir Richard Francis Burton.  He was one of those 19th century people who managed to be a premier swordsman, a world-renowned explorer, a geographer, a spy, a mystic, and a pornographer.  He spoke something like 30 languages.  He discovered the source of the Nile.  He was the first European to visit Mecca in fifty years.  He translated The Arabian Nights.

I don’t like people stepping over me, for fear I’ll stop growing.  And I don’t eat green M&Ms. They’ll make you sick.

And Six to Celebrate! We work with selected priority neighborhoods and take time developing walking tours which we have on the web…walk, take a look, wander around and check them out here: http://www.6tocelebrate.org

Photo of Simeon Bankoff Courtesy of the Historic Districts Council

Contributor Laura LaVelle can be contacted at laura@newswhistle.com