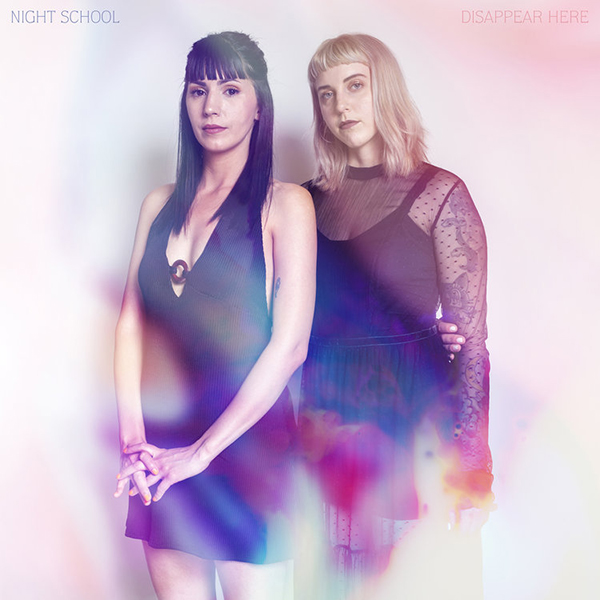 “Night School was originally formed through a close friendship of guitarist/vocalist Alexandra Morte and drummer/vocalist Baylie Arin in 2013. After the recording of their first EP, Heartbeat, bassist Cheyenne Avant joined to round out the trio.

“Heartbeat was released in October of 2014 on Graveface Records following a split EP with fellow label mates Dott entitled Carousel. Night School shared the stage with acts such as Best Coast, Whirr and Creepoid in 2015.

“After the release of debut full-length, Blush in 2016, featuring songs sung by Baylie & Alexandra, the writing of Disappear Here began.

“During the recording process, drummer/vocalist Baylie Jimenez left the band and was replaced by Cara LP. Disappear Here was written slowly over the course of two years and recorded with Nick Bassett in Oakland [during] 2017 and 2018. The album features songs written and sung by Alexandra Morte and Cheyenne Avant. “We wanted to move away from the doo-wop and 60s influences towards a cleaner more refined sound of our own,” explain[ed] the band.

“Disappear Here is expected [to be released on April 5] and followed by a small West Coast tour in April.