A friend of mine wanted to go to the Museum of Arts and Design in New York City.  Always being up for checking out new (to me) cultural institutions, we made a plan to meet up and see Queer Maximalism x Machine Dazzle.

When the elevator doors opened up to the exhibit, the first thing that came to my mind was the old MTV slogan–”Too much is never enough.” “Queer Maximalism” is the perfect name for what we saw–a riot of color, detail, and excess, a more-is-more aesthetic.  The first solo exhibition dedicated to the artist Matthew Flower (better known as Machine Dazzle) encompasses dozens of his costumes for theatrical productions, street theater, and special events.  I found the pieces endlessly creative in their details, humor, and occasionally pointed commentary on history and current events (and if you think that uproarious costumes cannot provide pointed commentary, Machine Dazzle can and will prove you wrong).

I did spare a thought of sympathy for the poor art conservators tasked with preserving these works, most of which incorporate found objects (including, among other things, ping pong balls, hoop skirts, slinkies, soup cans, red solo cups, plastic eggs, snack wrappers, and magazine clippings).  Not a job for the faint of heart.

It’s not an exhibit for the faint of heart, either.  It requires joy, a defiant, over-the-top joy, an appreciation of an almost anarchic self-expression, and a self-aware and amused flamboyance. It’s fascinating, if a bit of a sensory overload.  Many of the costumes are from a 2016 queer performance art concert production, Taylor Mac’s A 24-Decade History of Popular Music, which covered and critiqued the racism, homophobia, and sexism of 240 years of popular music (one hour per decade), which must have been both exhaustive and exhausting to attend. It’s rather a lot just to see the costumes and watch some video clips from the marathon piece, which was a Pulitzer Prize finalist for drama.  (Machine Dazzle was the costume designer for the show, and collaborated with Taylor Mac, joining him for frequent on-stage costume changes.)

Fortunately if you require some refreshment after all of the glitter, feathers, and general visual excitement, Robert (the restaurant on the top floor) has rather good food (modern American), friendly service, and a lovely view overlooking Columbus Circle and Central Park.

And don’t miss the shop on the first floor–exquisite jewelry, books, and all manner of inventive gift items (the holidays are coming up).

The Museum of Art and Design is open Tuesday through Sunday 10 am to 6 pm, with the restaurant open later for dinner.  Queer Maximalism x Machine Dazzle will be there through February 19, 2023 in all of its fabulousness. Check it out–you’ll be glad you did. 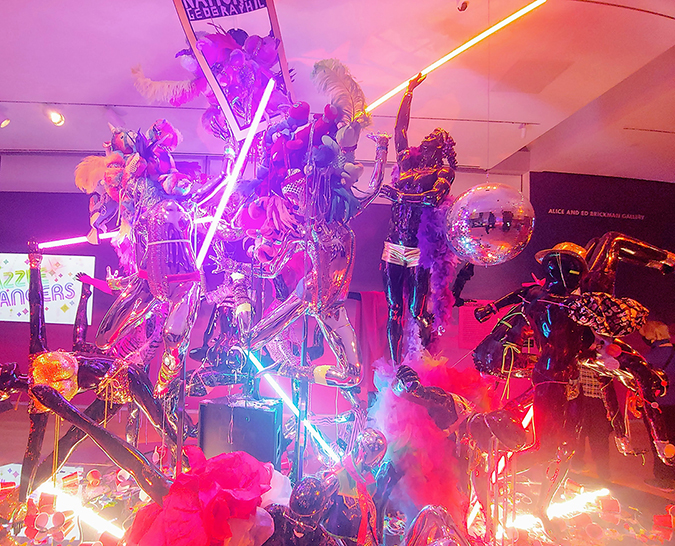