According to Hallmark, the traditional gift for a 20th anniversary is china, so send Rhymesayers Entertainment something nice this week. I mean, come on, the record label has been giving you gifts for years now; 20 of ‘em, in fact.

Atmosphere, Brother Ali, P.O.S., Dilated Peoples, Toki Wright, Grieves, and lots of other artists (a small army of them, really) have been bringing it live since 1995, and 2015 is as good a year as any to stop, take stock, and do a bit of celebrating.

Rhymesayers pretty much invented a business model over the years. It is more than a record label, it is a family. Their early efforts afforded RS an exclusive bricks and mortar retail outfit called Fifth Element, and after years of slogging it out in bars and basements they are taking over an NBA arena this Friday, December 4th, for their birthday party.

I recently had the opportunity to speak with RSE’s general manager, J Bird, about the label, their big live shows, and rap in general. 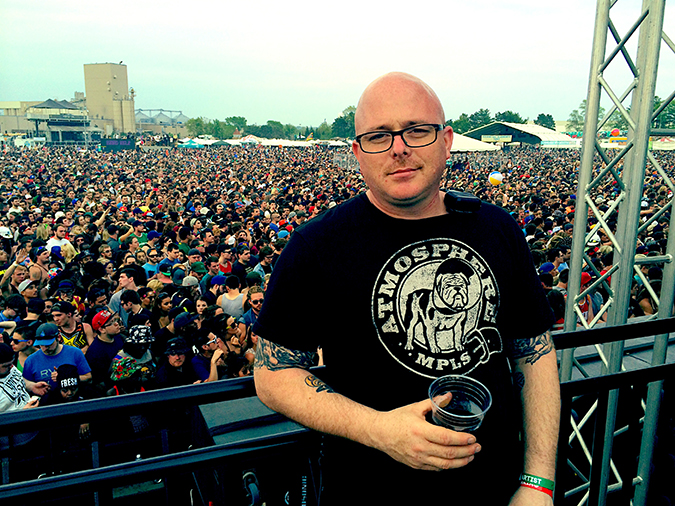 CW: And I have heard that you have been with RSE since the beginning.

JB: Since 2000, officially.  Pre-2000, I was involved in booking, but since coming on full-time, I wear a touring hat – coordinating, marketing and sales, and overall management.

CW: When did the Soundset Festival begin?

JB: 2008.  It took years to put it together properly, as the idea of putting together an all rap festival, in Minnesota, was sort of a new concept.

JB: Wow.  Yeah.  The first year was crucial.  Taking the idea of a festival to the Metrodome, and having over 12,000 people show up…  When it happened, it felt good; just like every year since.  There is the artistic side of the festival.  You can’t see everyone perform, but there was Snoop in 2013, getting De La Soul in 2011, the Pharcyde getting back together for 2009…

JB: It’s all RS, right?  Obviously, there are RS artists that perform at every Soundset, but there is so much going on.  There are multiple stages, and once the day starts it just doesn’t stop.  With the Target Center show, it’s all focused on one stage.  All RS artists, all night.

CW: Anything fans should be looking for on 12.4.15, besides incredible music?

JB: You never know what’s going to happen, you know?  A lot of our artists perform on each other’s music…  It’s not RS is telling anyone what to do, but people may turn up, you know?  There will probably be some combinations that will never happen again.  Also, I don’t think a $20 ticket for a Target Center show this big has happened before.

CW: Could you describe the set up for the Target Center showcase?  One stage?  Rotating stage?  Lasers and Pyro?

JB: All I can say is one stage.

CW: Will we have to wait until 2035 for another Rhymesayers showcase? 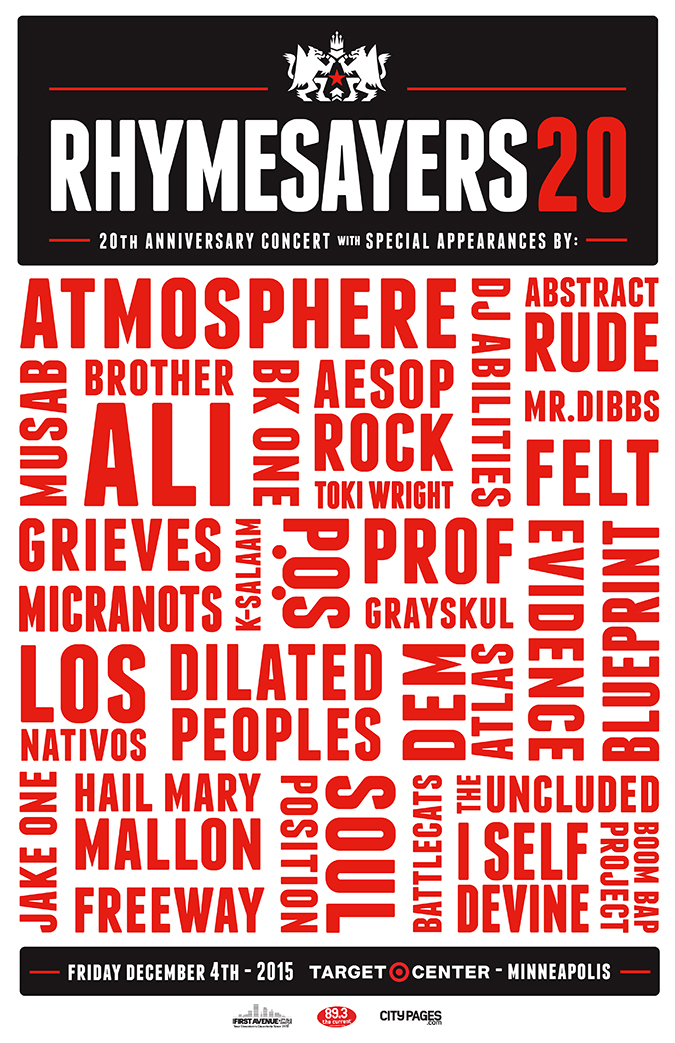 CW: As RS continues to grow, are there any compromises the label has had to make that you may have regretted?

JB: I think you have to occasionally compromise when you work on everything in house.  Because of how labor intensive it is, you can’t put out as many records as maybe you would like to.  Sometimes an artist blows up, and you think, “could’ve been on RS”.   For myself, I don’t DJ much anymore, and I miss it.  I am so focused on the label side of things.  Now, sometimes when you work with a lot of other artists, you find that there are better DJ’s or rappers out there.  You find your own way.

CW: What is a challenge for a record label like Rhymesayers and music lovers in general these days?

JB: There is so much music out there!  I can check out Soundcloud, AppleMusic, curated playlists on Spotify…  You can get EVERYTHING by an artist on Spotify.  There used to be fewer options out there, but you were more invested in it.  The challenge today is discovering what is really great out of all of it.  RS has a weekly curated playlist on Spotify called “Press Play Thursday.”  Our office puts it together, and it isn’t even all rap.

CW:  Speaking of which, what are some artists that speak to you that might be surprising?

JB: I can go back to Nas Illmatic whenever, and it is always great, but I can listen to the Broken Bells records anytime, too.  There is some Tom Waits‘ stuff that I can listen to over and over.

CW: Interviews can be sort of a silly exercise.  Is there anything you hate about the process?

JB:  I don’t do as many interviews as the artists, obviously.  I can tell you what they tell me is that they get frustrated when an interviewer isn’t prepared.  Do you need to say, “Atmosphere is from Minneapolis” or ask, “OK, now who is this ‘Atmosphere'”?  We have this thing called Google these days, right?  It’s important to respect each other’s time.

CW: Since it is the season for questions like this, what are you most thankful for?

JB: I am thankful that I can do what I do, with the people I know.  I am thankful for health, my family, and working for an independent record company in Minneapolis on an adventure.  It is a once in a lifetime opportunity to love what you do.