Let’s start with the lesson: Always give a place 24 hours before you judge. Mostar was a bombed out mess. Their Old Town was a tiny tourist trap, or so it seemed, when the German-speaking hotel proprietor wanted exorbitant prices at an empty hotel, and a beggar wanted money to guard our car from the police, who, according to him, will tow every car in Old Town away.

Well, we took both the car and ourselves away from Old Town and decided to drive around a little. But it didn’t look like we’d be staying the night, let alone more than 45 minutes. It was also raining, alternating between a drizzle and a shower, and not a dry moment.

The cold was also starting to get to me and I was wrapped in two sarongs that were originally brought along to shade myself from the sun, not to brave the chill.

As we were trying to find on the map a less touristy and perhaps more bustling city center, we stumbled upon a bunch of young people with paint cans, some on tall ladders, engaged in graffitiing a high-story office building, which was bullet-hole littered and bombed-out, a remnant of the 1993 city siege.

We got out of the car and I started taking stealth photos, as I didn’t think they would want to be photographed. But then we noticed an Australian-looking tourist couple talking to one of the young folk, and taking pictures of the graffiti.

We approached this lady also, and this is what we found out: To give life to a bombed-out town that lacked the budget to restore itself, for the second year in a row, a group of young Mostar citizens organized a street festival where paint and paintbrushes were provided for people to express their inner graffiti artist in and around the shelled skeleton of a national bank.

The chosen building had significance as it was not only the tallest building in Mostar, but was a symbol of emptiness, with every furniture piece, light fixture, and doorknob removed.

A group of artists invited from Berlin climbed to the top of the building and spray painted DOM, for all of town to see, it meant HOME. 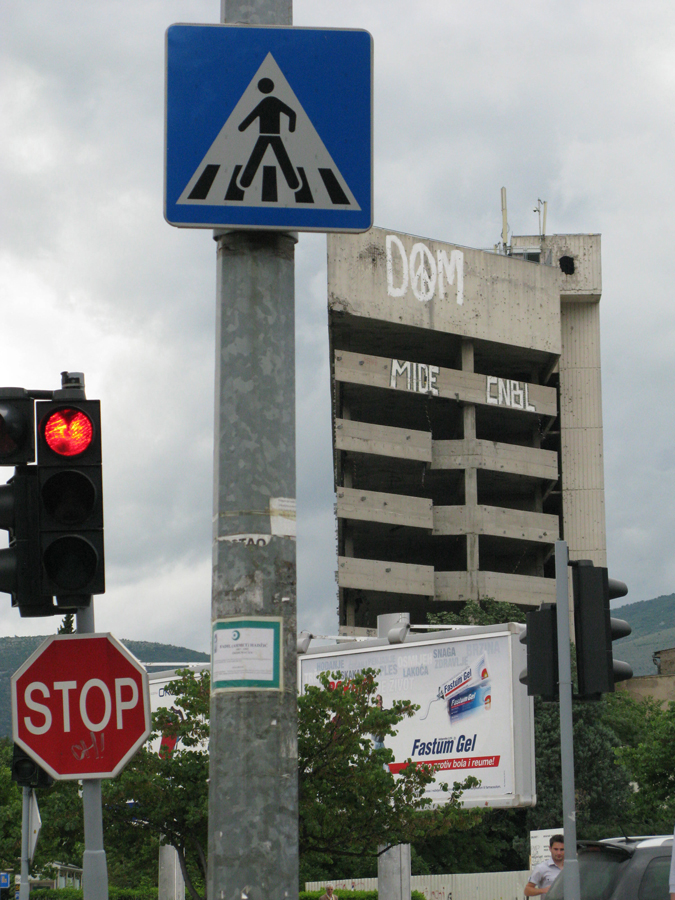 The organizer was an impressive Bosnian woman so full of energy telling us about how they worked for months to secure permits and licenses, and were so excited that despite the bad weather the street fair turned out to be a great success. We quickly made friends with the Berliner Moritz, who is a DJ and artist known as Arvark (“The Ant-eater” in English) who refuses to fly and can only be reached if you dial his analog cell phone or send him a letter to his home address. He and his buddy drove down five days to be in Bosnia to support the event.

We asked our new friends where to go and they introduced us to Hotel Bristol (which was half the price of the unfriendly offering in Old Town) for a lovely riverside accommodations with wi-fi, and invited us to a late night rave next door to a local prison.

We wanted to grab a bite to eat and the Concierge at the Bristol directed us to Hindin Han, in Old Town, which ended up being an absolute treat.

We started talking to a group of young American college kids that were traveling together after a semester abroad in various European cities, and couldn’t resist but draw a comparison to the emerging markets youngsters we had met earlier. The Americans possessed a relaxed, languid ease and light curiosity of the privileged (even though the kids came from middle class families), in sharp contrast with the intellectual eagerness and demanding intensity the young Bosnians had.

It will be interesting to see what happens to the world in another 25 years. Will these ambitious young Bosnians follow the American Dream and be carrying an American passport? Or will the Bosnias of the world surpass the U.S. with a bigger dream of their own…