David Halloran (much like NYC) keeps things interesting.  I was intrigued by the concept of a NYC running tour (having never heard of such a thing although I’ve taken walking tours in places as far-flung as Rome and Bangalore). He was kind enough to answer some questions for us about City Running Tours, and here’s what he had to say:

We provide guided running tours for runners of all abilities to show off NYC history and culture. In addition to our daily scheduled tours, we also lead personalized running tours of any length and tours for corporate groups.

Who are your customers?  Do you  get any locals, or mostly tourists?

Our runners are 99% tourists, about half from within the US and half international. Every once in a while, we get a New Yorker on a tour, and the New Yorkers are always amazed at how much they learn about the city where they live.

For those of us who only run when being chased, can you work with non-runners?

Yes! We run with new runners, veterans, ultra runners, marathoners. I have run a few times with one of our runners who is now 73 years old. She’s not as fast as she used to be (she ran the Boston Marathon in 1982), but she is unstoppable. I’ve also been run into the ground by a guy whose girlfriend booked the tour for him. She didn’t understand when we asked on the form about pace, so she just guessed. Her guess was pretty slow; turns out, he represented the UK at the European Duathlon (bike-run) Championships in his age group. We go at the runner’s pace. Slow or fast, we’ve got you.

Do running tours exist in other cities?

City Running Tours offer tours in 14 cities in North America. There are running tour providers all over the world, but we’re focused on the US and Canada.

What are the most popular destinations to visit on a running tour in NYC?

Just what you’d expect: Brooklyn Bridge and Central Park. Those routes are scenic and fun, but not the most interesting. Our most interesting route is America’s Roots. It’s a run around lower Manhattan starting in Battery Park, near the place where the Dutch East India Company built Fort Amsterdam, currently the Alexander Hamilton Customs House, now the Smithsonian Museum of the American Indian. The tour visits sites from the Dutch Colonial period, through the British Colonial period, and into the Federal period, the early days of the United States. My favorite stop on that tour is 57 Maiden Lane, the site of Thomas Jefferson’s house in NYC, known to fans of Lin-Manuel Miranda’s Hamilton as “The Room Where it Happened.”

That sounds amazing–my daughter (a huge Hamilton fan) would love that.  What’s the most unusual tour you’ve done?

Recently, a returning runner who’s a flight attendant asked if we could do a 10-mile personalized tour from his hotel at LaGuardia to see the sights of the World’s Fair in Flushing Meadows Corona Park. The run itself was a blast, but even more fun was doing the research and learning more about the history of the park and the fairs. Did you know that Terrace on the Park was built as a helipad so people could reach the fair by helicopter? Or that the legs of Terrace on the Park are in the center of the sides (instead of the corners) so that they would form giant letters “T” to mean Transportation?

I knew that it was once a helipad–but I have never been up there!  I was actually supposed to go to a party there earlier this year and wasn’t feeling well, so I missed it.  Someday! What’s the most amazing thing you’ve ever seen on a running tour?

There was that time when we saw a woman on the corner of Houston and 1st Ave simultaneously smoking a cigarette and brushing her teeth. Sometimes it’s the construction people arguing with cab drivers, but New York always shows up for work.

It’s an interesting place, to be sure.  What’s the most interesting thing you’ve learned on this job?

I’m endlessly fascinated by getting to know runners from other parts of the US and the rest of the world. I ran with a cancer surgeon from Brazil and learned that her residency program in Brazil was just as punishing as it is in the US. I ran with a Scot who lived in Switzerland; he was very critical of most US foreign policy, but he was very grateful for how the war in the Balkans ended in the 1990s. I ran with a mom and middle school teacher from Texas whose daughter raised champion hogs, and we talked about farm animals. I have so much to learn from my runners! Sure, I can tell them about the dinosaurs buried under Central Park, but we get to trade info and stories, especially on a long tour.

What’s the longest run you’ve ever done as a tour?

I think the longest tour that I’ve ever led for a runner was a 22-mile training run for someone who was training for her first marathon, London. It was her longest run to date and she was nervous. She got very quiet around mile 18, so I kept her distracted with stories about mayors of New York City. John Lindsey was a very interesting character, especially when you’re trying to get through the last few miles. I followed up with her a few weeks later to check on how she did, and despite record heat that year, she met her finish time goal. Also, one of the other guides wanted to run 30 miles for her 30th birthday, so we mapped out a route that took us all over the city. It took a long time, but it’s a heck of a way to earn a big fat diner brunch.

What’s the NYC destination that people should know about, but don’t?

So many! The Noguchi Museum in Long Island City, my favorite bagel place in the city (Terrace Bagels in Windsor Terrace, great way to end a run in Prospect Park), the Panorama at the Queens Museum of Art. Everyone goes to the Met, so I direct people to go the Jacques Marchais Museum of Tibetan Art in Staten Island. I’ve got a list as long as my arm, and it’s not even comprehensive.

You’re right about the Panorama–that is an amazing exhibit.  I am sad to say I’m unfamiliar with the rest of those recommendations.  I need to get out more, apparently!  On another note, what’s a book everyone should read?

Winter’s Tale by Mark Halperin. Magical realism at its best. It takes place in the greater New York area over a range of time periods. The book is a world unto itself.

That’s a terrific book, definitely one of my favorites.  How about a movie?

Not the movie of Winter’s Tale! I’ve seen Casablanca a few hundred times, I can practically recite it from memory. It’s a very funny movie, but most of the humor is very subtle and easy to miss the first time you see it.

I haven’t seen Winter’s Tale and I guess I will continue my policy of not seeing it!  (I think I remember that it got terrible reviews when it came out.)  I actually don’t think I’ve ever watched Chariots of Fire either!  (Casablanca, yes!) What’s the best advice you’ve been given?

At the start of the first ultramarathon I ran, the race director was making announcements and said: “Walk before you think you need to.” Ultras are not races, they’re experiences. You don’t have to push it all the time, sometimes you can take it easy.

I’m an introvert. I talk so much, and I put on a heck of show on a running tour, but when the show is over, it is over.

What’s the best or the worst thing that’s happened to you this week?

This week was all good! No one expects a male guide to carry tampons in his first aid kit, but this week was the first time I had a runner get her period during a tour, and I’m darn glad that I was ready for that.

Good job!  If you could go back in time and do something over, what would it be?

I would have skipped my first attempt at going to college. I failed out in second semester of my junior year, and finally got my undergrad degree at 35 when I was ready to do the work. I failed out at age 20, and graduated at 35 with a 3.9 GPA.

Belated congratulations on the belated accomplishment!  Is there anything you’d like to pitch, promote, or discuss?

Corporate running tours! They’re like a healthy happy hour. We get a lot of corporate groups that are in town for meetings and want a fun, engaging, physical activity for their participants that often turns into a great networking opportunity. We typically organize early morning tours for corporate groups, but we had one group of attorneys from all over Europe who wanted to do a group tour in Central Park and then end at a place where they could get drinks, so I mapped out a running route for late afternoon that ended at the outdoor bar at the Central Park Boathouse. I focus on New York City, but we also offer corporate running tours in most of the cities where we operate.

Thanks for your time! 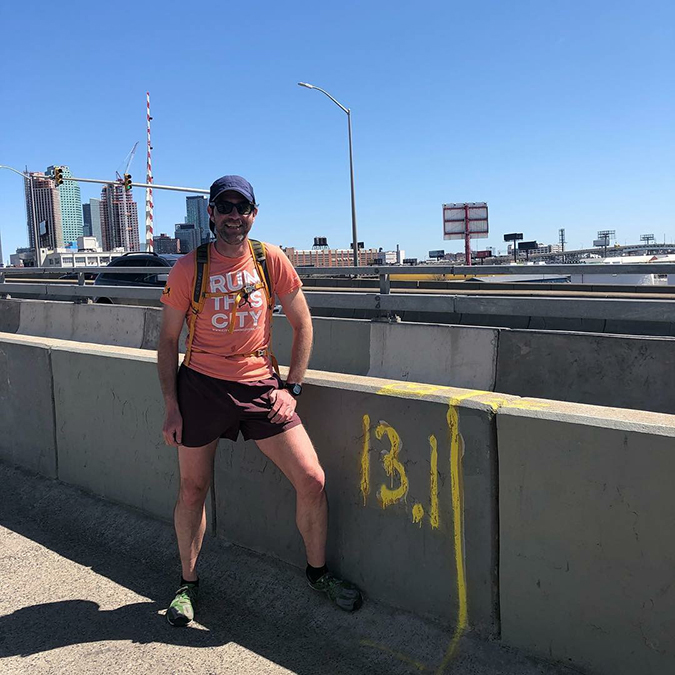