And off we go to Leningradskii Station to get into our First Class Sleeper Coach on the Grand Express to St. Petersburg.  Only 8.5h long, it was too short to do all the things we wanted to do – have a drink in the coach, then a snack at the restaurant, a little bit of snuggle while watching TV, and perhaps a few minutes of reading.  Before we knew it we were being woken up by the crew serving breakfast.  It was quite a delightful Russian breakfast of blini with sour cream and oatmeal kasha.  They even remembered to bring me hot water with fresh lemon without the tea bag.

The Lion Palace Four Seasons Hotel was a delight due to the great signature service of the staff.  The space seemed to be a bit restricted by its original construction.  The room had an unimpressive view into the courtyard, whereas the hall outside the room had a grand view out towards the river.  The Lobby was small and narrow with low ceilings, a grand staircase hidden behind this narrowness, and the tea house not quite as intimate or aristocratic as one would expect.

We then rush towards the Hermitage as I am dreading the lines I used to experience in the 90s.  Interestingly there were none, nor were we required to put on faux felt slippers on top of our shoes to protect the inlaid wooden flooring. We were still required to check our short jackets, as the Russians were always strict about coat check.  Most people visiting the Hermitage for the first time burn out after walking through the vast palace rooms on the main floor admiring the architecture as well as the art, which is an impressive collection of Old Masters.  But the crown jewels of the Hermitage sit on the simple and undecorated upper floor, with its collection of Impressionist art.  The Impressionist paintings housed in the Hermitage will likely be the largest canvas sizes you will ever see.  I’ve always said the Russian collection of European art, rich with Old Masters and Impressionists, is outstanding, amassed during the victorious World War II, not to be compared with the American collections which were purchased with money one piece at a time.  The sheer shock I felt when I saw my first real Matisse, the same picture I had seen on calendars while growing up but in actuality perhaps a 100 times larger, the size of one entire palace wall, I will never forget and is as real to me every time I see these pieces.  My only sense of regret whenever I see the Hermitage is its exterior.  In 1994 the exterior façade of the Hermitage was greatly suffering, paint peeling and chipping off like a scary dilapidated crazy house, but the gold painted trim against the pastel mint base was still one of the most luxurious sights one could ever imagine.  Since then the gold has been covered with a mustard yellow paint, and I’m still waiting for the Russian government to pour some of its oil riches into buying real gold paint to paint the trim of the Hermitage Palace. 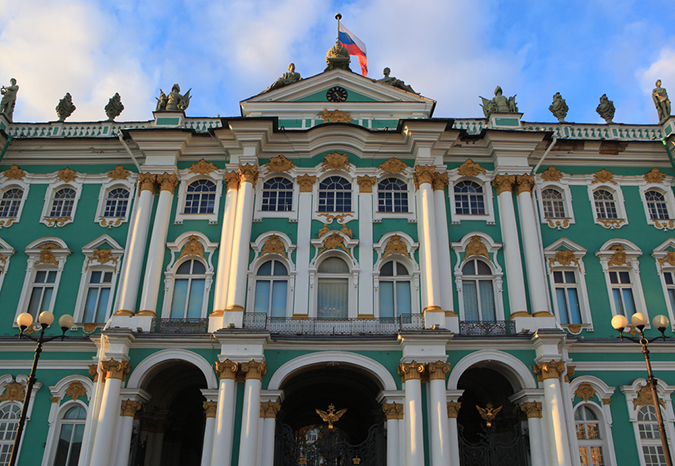 We then cross the Neva River to the other side where one of my most favoured establishments sit – Kuntskamera, aka the pickled baby museum.  This is where Peter the Great, aspiring to bring science, medicine, and the European way of thinking to Russia, collected and displayed deformed fetuses – Siamese twins, Januses, Werewolves and Giants… those mutants that were believed to hold ungodly powers, he displayed in large pickle jars with scientific explanations around the cause of the deformities. Unlike the rather empty Hermitage, this place has gone through a complete renaissance. No more were the fetuses in cloudy murky chloroform solution in a jar covered with a layer of dust, sitting in a musty, funky smelling scary lab.  The jars were clear, water purified, air perhaps scented, with a stream of young people swarming around the showcases to get a better view.  Freaks and monsters never seem to go out of style.

We then took up our friend’s recommendation and went looking for a restaurant Lyubimoe Mesto 2213, meaning, my favorite place, and walked down a boulevard which started out with a Gucci shop sitting proud and adjacent to a girlie bar.  Not yet cleaned up to be the major boulevard of class and sophistication that Gucci was betting on but it had the bones.  Lyubimoe Mesto was closed for a private event so we went next door to Barbaresco, which turned out to be a sister establishment, both owned by the Global Point Company.  The food was superb and so was the wine, we decided to do a bit of restaurant hopping so shared a few delightful morsels and quickly started walking down the embankment.  St. Petersburg is a man-made city, built by Peter the Great, inspired by Venice.  Thus you follow the water and cross canals and wind your way around, following the maze.  This is how we bumped into Literaturnoe Kafe, right in the center of Nevskii Prospekt. 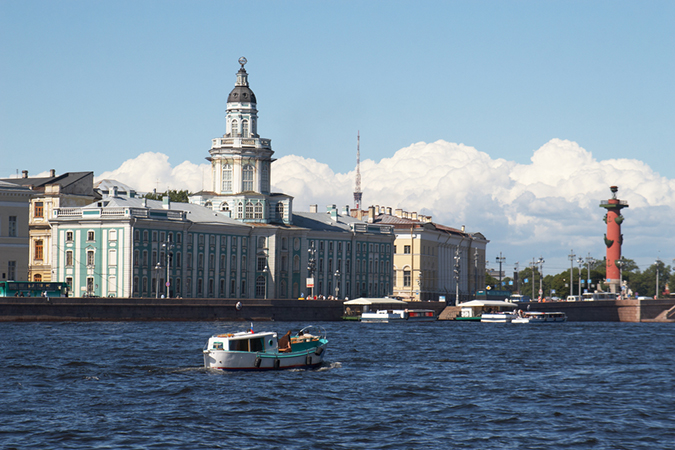 Literaturnoe Kafe is an old establishment, frequented by writers and celebrities of times past.  Pushkin is eternally memorialized as this is where he had his last meal before being killed in a duel.  Red velvet curtains, a grand piano with entertainers, and highly elaborate lamps parading down the center aisle creating full symmetry in the formal dining hall on the upper floor, it takes you back in time.  Being already the second meal of the evening we ordered a plate of pelmeni and some tea, and bemused ourselves over the offering of a ‘solid piece of cock’.  I had eaten here exactly 20 years earlier during the times of Perestroika and Glasnost, the Big Bang Theory and Shock Therapy!  Nothing had changed from those days and I reckon there wasn’t much of a difference from the days Pushkin used to frequent the café.  I imagine there were tourists back then as well.

The next day was a day of wandering and searching which started at a great little café called Schast’e, Happiness, another Global Point Family establishment.  By now we realized this company had taken over St. Petersburg, and was even headed to Moscow.  I was on a mission to find Yusupov’s Palace, the famous general that killed the unkillable, Monk Rasputin who is known to have poisoned the mind of the last Empress Alexandra Romanova of Imperial Russia.  I grew up reading fantasy novels about the Romanovs and Yusupov was one of the greatest romantic figures from my teenage years.  But after being pointed into several different directions from the staff at the Hermitage, the staff at the Four Seasons, to the street peddlers on the embankment, we just about gave up.  Walking along the Moyka River Embankment and then Fontanka River Embankment, we found a series of antique and vintage shops of varying quality and prices, before we settled in for some more dumplings at Pelmenya [address:  Fontanka 25].  We decided to then venture into the underbelly of the town, closer to the train station, where commerce was abundant, including a few interesting dress shops.  We however walked out once we realized the funky dresses, which I had imagined were the creation of old Russian seamstresses, were all made in China.

We stopped at Rybnyi Restoran, direct translation, the Fish Restaurant.  While lacking any type of ambience, we quickly spotted trays of fish being served to neighboring tables and understood it may not have been such a bold statement to call themselves THE Fish Restaurant.  We had the most amazing plate of smoked sturgeon and trout, with vegetables and blackbread.  Tempted to order a main course, we decided we should move along to see if we could squeeze in a few more experiences before we had to hop back on the train. 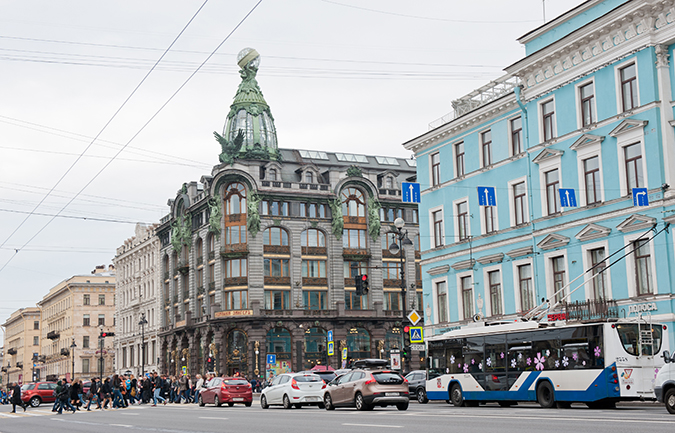 All our friends had recommended high tea at the Astoria Hotel.  The little stopover at Rybnyi Restoran had cost us high tea, as we arrived to the Hotel just as they were clearing the giant sterling silver samovars from the lobby bar area.  We sat down anyway and ordered some tea, and a glass of champagne, to try to drum up the old glory.  The service was being provided by the cigar bar, Lichfield Bar, tucked into the side of the lobby.  After this we had just enough time to hit the Library Bar at the W Hotel, which was unimpressive without the beauty crowd.

NEXT WEEK: A Few More Recommendations

LAST WEEK: An Intro To Moscow!