Takeoffs & Landings, otherwise known as T&L, is a new rock band from Lima, Peru. If you haven’t heard them, we think you should check ’em out.

We can’t stop listening to the band’s EP, in particular their tune “Whisper.” If we weren’t covering an assignment right now, we’d jump in the car and speed down the highway to this song… on continuous repeat.

This is a quartet in control, composing percussive indie beats and letting their female lead, Naama Bengtsson, purr and pounce.

We can’t wait for T&L’s full-length and hope a NewsWhistler will be able to catch them at the Culture Collide festival in Los Angeles in October.

In the meantime, the band has been kind enough to answer a few of our questions.

If you’re ready to learn more about a rising band and the Lima music scene, please stow your tray table and put your seat in an upright position. You’re about to take flight with Peru’s Takeoffs & Landings. 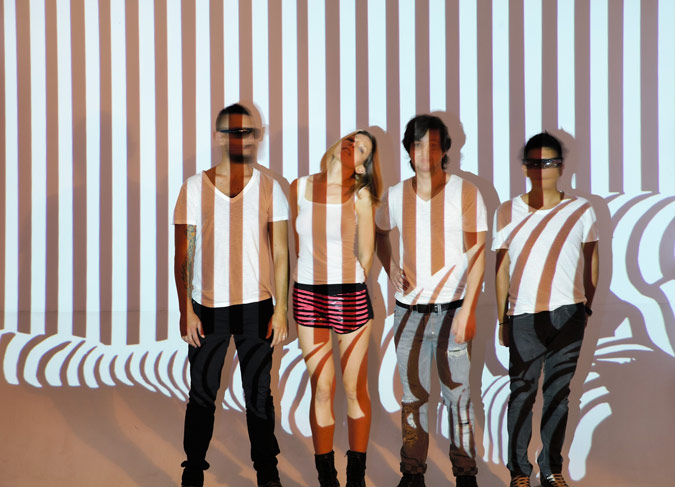 1. What are the full names of each band member and the instrument/s you play?

2. When, where and how was the band formed?

Chris and Dennis envisioned a new band, and in late 2013 they started the search for its members.  Naama and Christian, and our recent addition, Sergio, joined to create T&L. We had a strong chemistry from the beginning, and we started creating music immediately. T&L is based in Lima, Peru, where we are evolving locally as an emerging Peruvian band, and at the same time hope to export our music and grow internationally.

3. Who are T&L’s influences? And who have you been compared to?

We each contribute our own musical influences and backgrounds. We each had been doing music individually prior to T&L and we bring that to the band. Having said that, our common denominator is definitely the 90’s and early 2000’s. This is also the feedback that we’ve been getting from our audience, who all reference bands from that time period.

4. What direction are you taking your music?

This is really not something we think about. We’re constantly creating and our sound evolves organically. We don’t necessarily have a clear final destination for each song. The material for our first cd is the first 10 songs we completed as a band, and all that came later will either be the material for our next cd, or (most likely) the in-between journey to it. We’ll continue in this path and evolve in the process.

We’re currently recording our first album, which is the product of a young band that we hope will have a long trip. Naturally, whatever material that’ll follow will have a different feel to it.

5. What is the Peruvian music scene like? Is it heavily rock influenced?

The Cumbia and Huaynos are the ‘kings’ of the music scene in Peru. The rock has a small, yet significant part in this scene. Lately there seems to be an interesting development in Peruvian rock. If you want to come and hear good rock in Peru, you can definitely find it. Many local musicians are influenced by foreign tendencies. They channel these influences and apply it to their sound, creating a new musical style molded with their biological sound.

6. Who are some current Peruvian bands that our readers should get to know?

7. Who are some legendary Peruvian bands that you think our readers would like?

Off the top of our heads, two bands that stand out to us are Tarkus and Laghonia, both 70’s bands. Their music was somewhat heavy but they were both good bands in their time. Had bands like these continued today, they would probably have had quite a strong influence on the local music scene.

8. What are your favorite nightclubs and music halls in Peru, and why?

Help! Retro Bar and Sargento Pimienta are great venues to perform at as well as to check out good bands. These are arguably the hottest nightclubs in Lima, so they’re always packed with people that party hard. Downtown Lima also has good venues, smaller bars like Stereo 6 and Yield, where you’re likely to hear good local artists in a more underground atmosphere.

9. Where will you be playing for the rest of the year?

We have big shows coming up! The first one is Festival L I M A. This is the first edition of this festival, a 4-day event with showcases at the best venues in Lima and a main stage for the main acts. We’ll play alongside renowned artists from the area, such as Zoe (Mexico), Burbujas (Argentina) and Niño Cohete (Colombia).

The next big venue is Culture Collide 2014 in October. We’ve been invited to play in both Los Angeles and San Francisco. This is a huge deal for us and an amazing opportunity.
Apart from these festivals, we have frequent lower-key local shows. Our next gig is in the city center on September 4th. We really enjoy playing in the center, the atmosphere is great.

10. When will your next album arrive in stores? What can listeners expect?

We’re currently recording our first album with plans to release it in early October. Listeners can expect to be transported in time to their (or their older sibling’s) local grunge venue where they used to hang out as teenagers, but be pleasantly surprised to hear the futuristic synthesizer kick in. This is music to crank up the volume while driving in the fast-lane and to give you an energy boost; it won’t mellow you out. Throughout this album there’ll be a lingering high level of intensity – this is our musical personality and what we do best as a band.

We want to thank you guys at NEWSWHISTLE for the shout-out! It’s a huge honor to be recognized, and even more so when it’s coming from so far away.