Cloud Cult is an interesting band. There are elements of traditional rock and roll, but give them a couple of seconds and it is clear that something else, something more is going on. You know what? Stop what you are doing, and watch this: 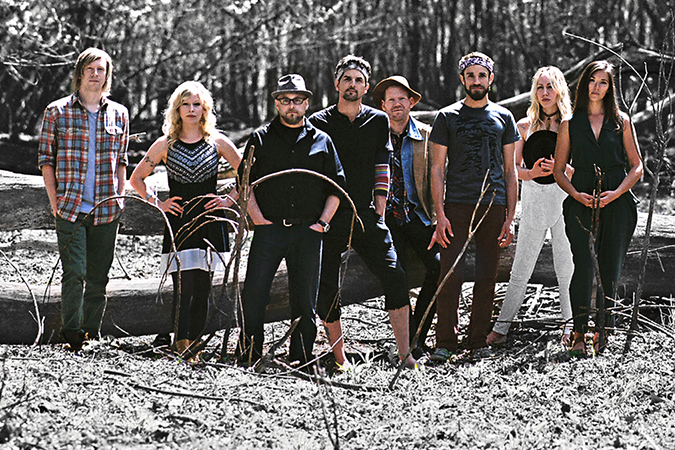 The living room in our house growing up is where we spent most of our time as a family, and we didn’t have a TV in there. The centerpiece was a piano, and my mom would play all of the time. I remember times when I was really young where she would play requested favorites from us kids, and my sisters and I would dance around. I think it distilled a lifelong feeling in me that you can make your own entertainment, and you can also sculpt your own mood by what you choose to create.

We were playing a festival in Denver, and our set was right after the Dead Milkmen, which was a band I loved when I was growing up. At side stage, Conor Oberst, another hero of mine, was setting up. And we were surrounded by the gear of Modest Mouse, who was going to be playing later. We felt pretty honored to be in this lineup. It was incredibly hot on stage, so our computer gear started to fry even before we were supposed to start performing. We have backup systems for that kind of disaster, but even the backup systems were overheated. Vocals, keyboards, and guitars all run through the computers for different kinds of effects, so if the computers are down, we literally cannot perform. So we’re standing in front of a few thousand people with no way to perform. By some kind of miracle or luck, the computers started up just as we were supposed to start playing, so we were able to do the set.

I like getting to meet our supporters face to face and hearing some of their life stories. It brings new hope to me about humanity and about how good people can be. My least favorite thing is when I have to be away from family. Fortunately, we have taken our kids on most of our tours.

Driftless Books in Viroqua, Wisconsin. It’s technically a book store, but they have a floor full of very old records that they don’t even have on display, and they do music shows there and are starting up a recording studio. There’s no ego around there, just good people trying to do something good for the community.

Mozart’s Requiem. Our first son, Kaidin, had a collection of albums, and he’d choose one each night before bed to listen to as he fell asleep. He chose Mozart’s Requiem the night he passed away. Whenever I hear it now, it brings me to a very deep place, and I feel like I can almost feel Kaidin just a few steps ahead of me.

I’d call my wife Connie. She knows me better than anyone, so if went off the deep end, she’d probably be somewhere nearby with a safety net, and I’d do the same for her.

Cloud Cult is on tour right now, and the Seeker soundtrack (and everything else) is available on iTunes, Amazon, GooglePlay, and hey, probably at the merch table at shows. Get out there.