From the moment we saw their name we knew this band could be something special.

As their promo materials tells us, L’Amour Bleu is “named for the historical textbook of male sensuality from 1978” with the band “explor[ing] emotional voyeurism through the aesthetics of masculine desire, rebuilding soft centers with faded color swatches of sadness, rage, frustration and ambivalence with a corrupt, orgiastic pastiche of decadent pop and beyond.”

It’s a great description – and kind of gives you the flavor of this band, which is led by drummer Matt Tong (Bloc Party, Algiers), guitarist/vocalist Ryan Schaefer (Palms), director and exhibitionist performer Shane Ruth (Baby), and guitarist/bassist E.A. Ireland.

From glam shivers to goth teases, L’Amour Bleu’s music is of the experimental variety.

The band is having fun. They’re pushing boundaries and creating sounds and visuals that are different. Just take a look at their album cover – a funny tip of the cap to Springsteen and The Stones. 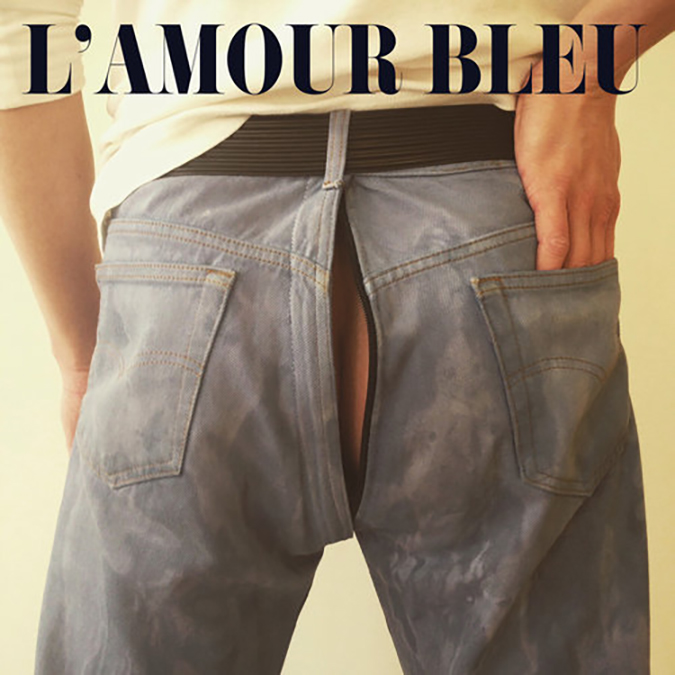 One of our guilty pleasures is the soundtrack to the movie Sid & Nancy. It’s cocky and sensual and searing in its search for new sounds – and that’s the vibe we kind of get from this band.

Is L’Amour Blue a slick side project or part of a serious musical mission? We can’t tell – and kinda don’t want to… We’re just happy to stretch our ears, enjoy the ride and listen to their debut album, which pops on Valentine’s Day.

AGE (if you want to give it up): SausAge

As a kid, I was told that backmasking was the Devil speaking through the music… which made me uneasy and twitchy.

The first record I purchased was Julio Iglesias.

In general, I am unembarassable.  I have no shame (the stakes are usually too low)

But once on stage, I forgot the chorus to Disease Machine – lol.

My goodness, I love it!  The strange terrain, new faces and funny smells allow me to try out different parts of my personality.

For instance, sometimes I like to pretend I can’t walk, like I drag a leg.  Other times I talk in pig-latin all day.  It gets crazy!

Dislike? Hmmm…I really hate it when I run out of lotion for my legs and there’s no pharmacy in sight!!!

Right now, I cant get enough of Cool For the Summer, by Demi Lovato – fierce!

6. You wake up in a seedy Berlin hotel room with no recollection of the past 96 hours.

Being terrified of the scream in the middle of “A Hard Day’s Night.”

Misreading the setlist and smashing up my drum kit only to realize there were three songs left. I had to be smuggled out of the venue in an expandable suitcase.

I like relinquishing control of my in-flight entertainment system to Ryan. Just giving in to someone else’s choices, cultivating an atmosphere of trust is really important in this band. I dislike how much money we spend in fancy restaurants but we do have exquisite tastes.

It used to be the “Our Price” on Old Christchurch Road in my hometown. One year my brother asked me to get him Enya’s greatest hits for Christmas and none of the staff in there laughed at me. Of course, Enya’s very cool now, so I do credit my bro for turning me on to her.

Laraaji’s “Essence/Universe.” Whenever I need to retreat from the white hot white noise of political discourse in this country, I like to take my socks off and listen to Laraaji whilst sipping on some cold season tea.

My bank, to cancel my credit cards. Then Mia Ender, to reinstate them… [Mia] is a friend and collaborator of ours.  She is a musician, Dj, performance artist, and muse.

AGE (if you want to give it up): New Age

My much older sister dating a hairdresser named Marshal who played a bass and had hair extensions. It was hella.

At a show in Mexico, Diva’s cheat sheet for the “Buddy” bassline kept vibrating off the bass amp and he couldn’t see in the dark to read it on the floor so he was asking Baby to shine his cellphone on it and Baby was like, “What? No I’m busy RN.”

We like sleeping in beds together and holding hands.  Diva sometimes freaks and demands fresh greens.

My favorite song/album would  be a 1.5 hour recording of a DJ session from the Mineshaft Club in NYC.  It just sticks.  On it is an edited version of the B52s Deep Sleep, which is one of my favorite tracks, but only that version.

And before we go, L’Amour Bleu would love for you to check out two of their promo videos. Watch them alone or with a partner or with a group — but just not at work. Happy Bleu Valentine’s Day!