It is said St. Patrick drove the snakes out of Ireland, but that aspect gets lost pretty quickly when downing pints of green beer.

In honor of St. Paddy’s Day we decided to forgo the heavy drinking – and instead we paid our respects another way. By eating some serpent.

Snake as food? Yes, and it’s surprisingly quite delicious. While we don’t crave the meat, we do enjoy eating it on special occasions.

Snake is a delicacy in Hong Kong – with many locals eating it during cold spells. The belief is that the meat has unique warming properties.

Though the weather wasn’t chilly yesterday in Hong Kong, we went to Master Fun’s Snake Restaurant (known locally as Ser Wong Fun) and ordered a bowl of snake banquet soup, along with a plate of sautéed snake with vegetables and garlic sauce.

If you haven’t had snake banquet soup, the base is reminiscent of hot and sour soup, thick but refreshing. 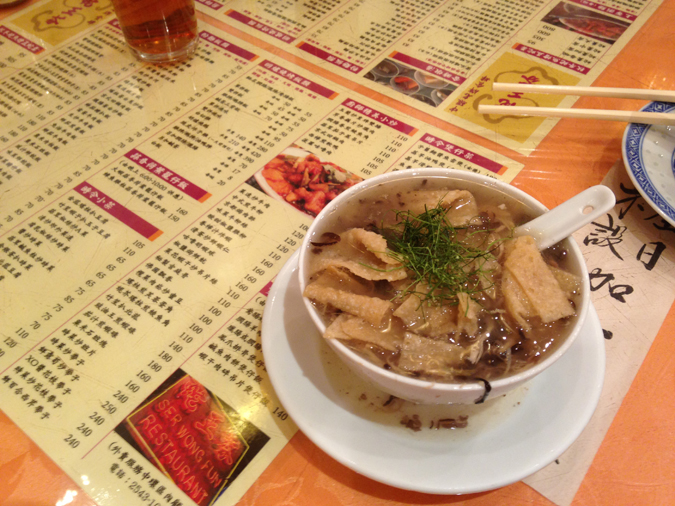 This will elicit a laugh, but strands of snake taste like chicken – and many snake soups use chicken meat to round out the dish – but banquet soup is full and fragrant due to a balanced portion of chopped mushrooms, shredded lemon leaves, fried wonton strips, and several different types of snake.

Snake banquet soup is familiar enough to any palate not to elicit any hesitation.  And while it’s over US$10 a bowl in Hong Kong, it’s definitely worth a try.

On the more expensive side is a plate of sautéed snake (over US$20).

Served skinned, deboned and slathered in garlic sauce, the meat is chewy and a bit rubbery but soaks up the flavors of the hot marinade quite nicely. The mushrooms, bamboo shoots and carrots, which covered the plate, were cooked to perfection and helped complete the order.

While South China is one of the main centers of snake meat consumption, the ingredient does show up in cities around the world, including Vancouver and Hanoi.

Still, we think the high-protein, low-fat meat is not as prevalent as it should be, and even in Hong Kong the tradition may not last. The BBC reports the biggest snake charmer in the region is running out of protégés.

Looking back, it may have been a shame for St. Patrick to oust snakes from Ireland. If only he had tasted them first.