The World’s Largest Rubber Duck is a creation of Florentijn Hofman, who is known for his enormous artwork.

As the artist puts it, “The Rubber Duck knows no frontiers, it doesn’t discriminate [against] people and doesn’t have a political connotation. The friendly, floating Rubber Duck has healing properties: it can relieve the world’s tensions as well as define them. The rubber duck is soft, friendly and suitable for all ages!”

So Craig Samborski, event producer, got in touch with Mr. Hofman (who lives in the Netherlands) via e-mail, hoping he could rent it for the LA Tall Ships Festival last year.

Alas, that wasn’t a possibility: he couldn’t rent a very large duck, but if he wanted one, he had to build it and own it (Mr. Hofman provided the plans and design).  And so, the Duck  was, at great expense, fabricated.  Moving it from one part of the country to another is a $10,000 endeavor. 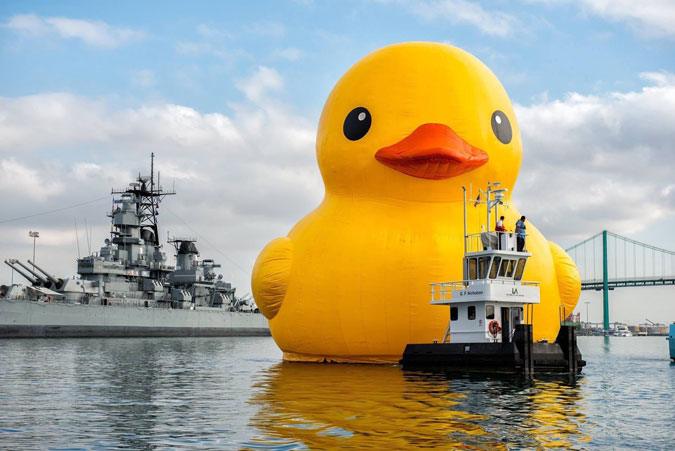 This Duck has only been on exhibit in LA so far.   There have been other such ducks built along the same design, albeit a bit smaller.  (There’s one in Pittsburgh, PA that measures 41 feet.) Craig’s Duck (above) is 61-feet-high.

It actually caused a bit of controversy at the LA event at first because it received so much attention: the Today Show, CNN, the BBC, the LA Times, the Washington Post, and various other media outlets did interviews, and the World’s Largest Rubber Duck was emphasized so much that the captains, crew, and owners of the tall ships felt slighted.

But a few days later, the Duck was back in everyone’s good graces…it had garnered so much attention that it brought many, many tourists and customers to the event, and so ultimately the floating sculpture was extremely good for business.

Currently the Duck is in storage near Philadelphia, and will be making its second public appearance at the Philadelphia/Camden Tall Ships Festival this June.  It has not yet been to its “home” in Minnesota, although Craig would like to take it back there at some point if he is able.  (It is, sadly, too large for his backyard.)  He does say that it is shocking, just how huge the thing is, at six stories high, and weighing eleven tons.

I asked about maintenance, and yes, the Duck has to be kept clean.  It is actually made of vinyl, not rubber.  It must be packed up correctly.  The pontoon it is affixed to is made out of steel, which has to be taken care of, and painted periodically.

Craig doesn’t actually know what the lifespan of an enormous duck is, but hopes that it will prove to be long lasting.  Pontoons are very stable boats, but in high wind the Duck acts like a giant sail, and must be deflated.  Craig has prepared for every contingency: in the event of accident, the Duck is fully covered by maritime insurance.

Visitors can get close to it, but no one can touch or ride on the Duck; it does not carry passengers, and is, in fact, moved by tugboat.  (I was disappointed to learn that there was no Duck Captain, but perhaps we can define Craig as an honorary one.  It would certainly make his resume stand out.)

Do not worry that the Duck is lonely; Craig also owns a baby duck (this one is only 10 feet high) named Timmy.  Timmy’s mom remains nameless, but he is open to ideas.  In fact, the Philadelphia/Camden Tall Ships Festival is going to have a naming contest for the Duck.  Come to the event with some good names in mind!  Who knows, yours might fit the bill.

The Tall Ships Philadelphia/Camden 2015 festival takes place from June 25 to 28 on the Philadelphia and Camden waterfronts.

Enjoy a myriad of festival attractions and the rare chance to catch a glimpse, step aboard, and even set sail on some of the grandest ships of yore.

Tickets can be purchased online or by calling 877-4FLY-TIX.