The last time I saw Jibrail Nor, he was playing drums with one of his bands (BR & Timebomb) at Club Groove in Greenwich Village, New York, as part of the Legros Cultural Arts’ Women in Arts Series, in March of 2013.

They were the house band backing several different female vocalists, singing in very different styles (we heard everything from a Fats Waller cover to classic R&B to French pop), as well as performing their own work.

Club Groove, by the way, is really a great place to see live music, as it’s small enough that every seat is a good one, and it’s easy to chat with the musicians between sets.  (Also, the happy hour can’t be beat, at $4 for all drinks and bar food.)

We were all quite happy to be there celebrating SWAN day (Support Women Artists Now).

Jibrail and the band are big-hearted musicians who spend a lot of time and effort giving back to their community and supporting other artists.  Check out their music here: http://www.brandtimebomb.com/

Did we mention that we like this band a lot?

They combine R&B, jazz, rock, and classical influences to create original hip-hop music, and feature a violin and trumpet, in addition to bass, drums, and guitar.

I caught up with Jibrail for dinner at the Washington Square Diner, a cozy 24-hour eatery beloved of NYU students and musicians, which has apparently been frozen in time for a few decades (décor, menu, price point, and all).  Here’s what we talked about:

Our Q&A with musician Jibrail Nor 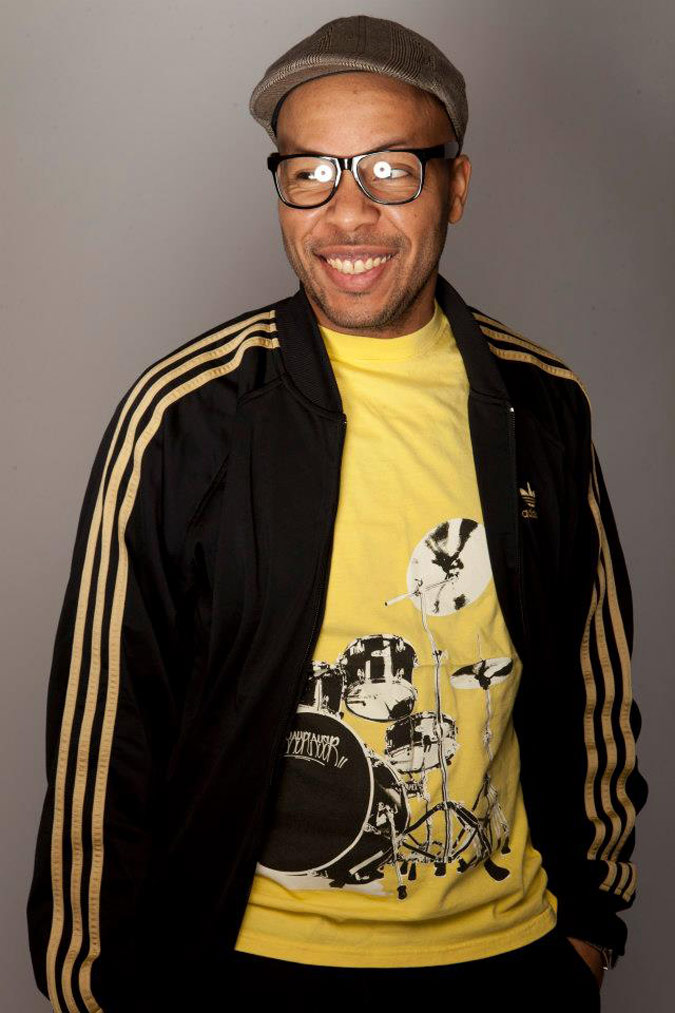 One of the administrators in my school is pregnant, and a little girl told me, “I just saw a really big belly!”  She went on to inform me that sometimes belly buttons really stick out.

Quitting the NYC Parks Department (I worked there for eight years) to pursue music full time.  I’d just turned thirty, and was starting to get disillusioned with my life and what I should do.  Someone I respect gave me the advice to do what I love, and I love music.  If not then, it would likely be never.  I was still pretty young, not married, no children.

Now I’m not doing music full time any more.  I think if I’d had better luck, or been better at networking, maybe…but I like eating, and living indoors.

I’d be less stupid in several relationships.  I have a bad habit of remembering dumb things I’ve done.

From Mitch Hedberg: This shirt is dry clean only.  Which means it’s dirty.

Another one of his I love: I don’t have a girlfriend.  I do have a woman who would be really upset if she heard me say that.

That I was born in Connecticut.  I’ve been in Brooklyn almost my whole life.

Get a job you love, or at least like a lot.  You’ll be there more than home and see those people more than your friends and family.

I live with my sister, who watches a lot of reality TV, and I like T.I., a rapper from Atlanta.  His family seems kind of normal, and I think they’d be okay as neighbors.  And I like his music.

I am afraid of getting lost in the suburbs.  It all looks the same. The streets aren’t on a grid.

I haven’t done nearly enough reading, but X-Men: Mutant Massacre is a good one.

11. What musicians should everyone check out?

I like a lot of genres.  Lately I’ve been listening to Queens of the Stone Age, Bjork, St. Vincent, Run the Jewels, and Ruben Blades.

Yes, besides BR & Timebomb, I’ve been playing with the Youngbloods on Saturday nights at the Five Spot Soul Restaurant: http://youngbloodsjazz.wordpress.com/  Come and check us out.

And I play in an electronic funk band called Comandante Zero: https://www.facebook.com/C0Music