Recently, I reviewed Haley Bonar’s most recent album, Last War, and it is a stunner.  On a blustery, frigid Minneapolis afternoon, I had the opportunity to sit down for lunch at Hazel’s Northeast, and the conversation ranged from her albums, vinyl, and not being a passive listener.

CW: I discovered you by listening to Tom Weber on Minnesota Public Radio a few months back.  As someone less familiar with your albums prior to Last War, is it fair to call your previous work more “spare”?  What drove this style?

HB:  Well, I listened to a lot of old country music, also a lot of punk rock, rock and roll… And then I heard Low and Elliot Smith and Bright Eyes who were mellow, but had a certain edge to them, and the lyrics were important.  Nothing against punk or rock or metal, but you pretty much never know what the fuck they’re saying, and that’s fine.  The energy is there, which is great.  I’ve always been a writer.  I’ve been writing songs and plays and poems since I was a kid.  As an adolescent, I fancied myself a poet, and I decided to pick up a guitar. 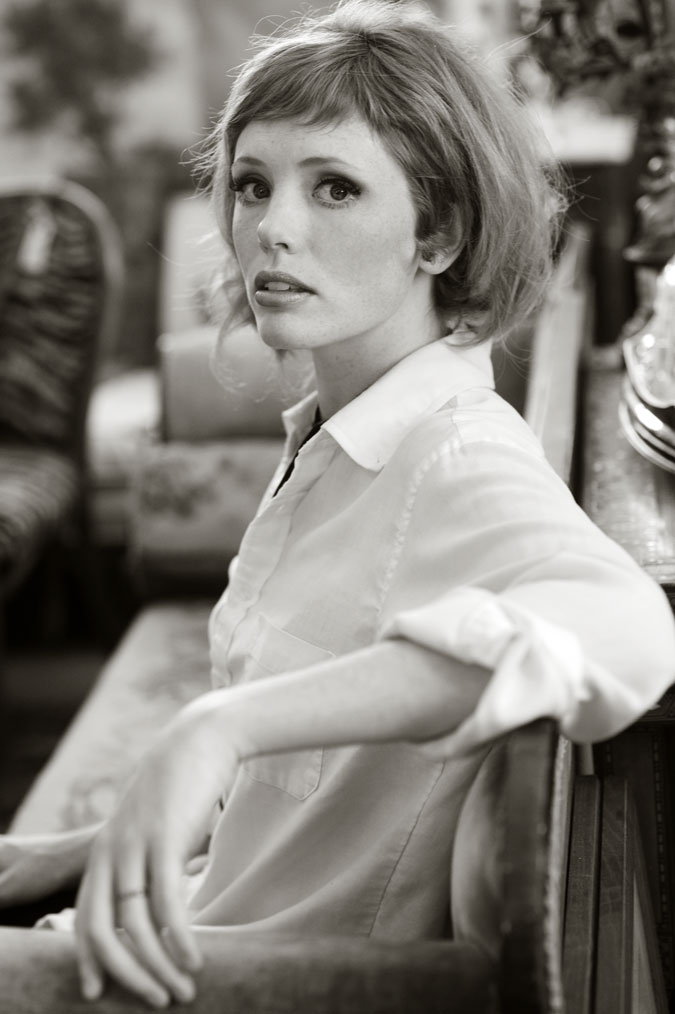 CW: Was it a matter of economy to record with little production, or was it because it felt more honest?  Not that you can’t be honest in a loud song…

HB: It’s a different projection of emotion.  If you are screaming, and playing your heart out, that is just as valid as someone sitting there playing something super personal and dark

CW: I would call [earlier album] Lure The Fox both “dusty” and “humid” if that makes any sense at all.

HB: Yeah, I was listening to a lot of bands with little production.  I thought that was bad ass.  Lure The Fox, especially.  I had recorded an album prior to that [… The Size Of Planets], and gave it to a major label who wanted to sign me, and they of course hated it.  So, Lure The Fox was kind of my “fuck you” record.  “You want a commercial record?  I’m going to sloooow everything down, detune a whole step, and have three instruments on the whole thing.”

HB: That’s kind of like something Alan Sparhawk from Low said to me at one point, “When I started Low, I wanted to create a band that was unlistenable.”

CW: I’ve been a fan of Low for years, and the trajectory of their sound…

HB: Yeah, it’s like over the years, the more I play I discover how awesome other musicians are, and the production values play in their music…  It’s been a natural progression to wherever Last War ended up.  I have another band called Gramma’s Boyfriend that is synth-y rock and kind of wild and that influenced that as well.

CW: Is [album prior to Last War] Golder a transitional album?  Is it fair to say you were moving closer to what Last War would become?

HB:  Totally.  If you listen in order, you can hear hints of what the next one will be like.  Synth-y stuff happening, a little shoe-gaze-y guitar in the background…

CW: Is there anything that drove you to start experimenting more around that time?

HB: I had moved out to Portland, Oregon in 2008 because I needed a new space.  I thought I would continue to write the same shit if I lived here [Minneapolis/St. Paul] at that point.  I needed to shake things up, so I put myself in a vulnerable situation.  Golder came out of that.  There is also an ache to return, and then I came back after that album.

CW:  Any plans to leave again?

CW: That’ll do it every time.

HB: Custody reasons alone, I’ll be stuck in this place for a long time.

CW: Do you want to talk about the Graveface charity series at all?

HB: Ryan, the owner of Graveface Records, was like, “I want to come up with a charity series that is up to the artist completely.”  So, I chose the Women’s Foundation because they are trying really hard to stop the trafficking of young women in Minnesota.  It is unbelievable that it is happening here, so I got in touch with them in order to do my little bit.

CW: Last War is a really, really good record.  Being unfamiliar with your previous work until recently, can you talk a bit more about what went into a much more rock-y album?

HB: It was raw, and I was feeling that at the time.  It was an emotional, crazy time…  I was basically a single mom to a one-year-old, and it was terrifying, and the music basically shot out.  I worked out songs while she was asleep.  There were babysitters.  There wasn’t anything intentional about it.  We went into the studio, and Jacob Hanson, we have worked together for many years…  I asked him to co-produce a few of the songs.  Like “Heaven’s Made For Two” was a slow song, but Jake said, “let’s speed it up” because there is something about the sad, achey lyrics juxtaposed with the more rocked up song. That’s what the record is to me.

HB: Well, you answered it.  It is. I’ve been asked that question a lot, and I am happy that it is happening because it means that I have done my job.

CW: How was your reaction from your fanbase to Last War?

HB: It has been really positive.  A lot of people told me that they saw this album coming, and I am really glad you made this.

CW: In previous interviews, you have sort of made fun of music videos and your place in them, but if we can celebrate acting, cinematography, etc., can’t a well put-together music video be considered “art” as well?  I think “Last War” is a great video.  My four-year-old daughter, Lola, asks “why is she running through fire”…

HB: My daughter asks every time she sees it!

CW: The video is super eerie, and lonely, but not in a “smack you over the head way.”

HB: If I came across as sound like videos aren’t valid pieces of art, that is not what I meant.  I have seen videos that have made me weep, videos that are inspiring…  Maybe what I was talking about was my feeling of being awkward being in a video.

CW: I think the videos for Last War are pretty cool.

HB: I was just talking about this with a friend.  The guy [Josh Quigley] who did the cover for Last War shot the video for “From A Cage,” and that is my favorite video, and that is first time for him making one.

CW: I am interested in [concert series] Rock The Ordway.  How did that come about?

HB: I don’t know, actually.  When they approached me, I wasn’t sure of the spectrum of the series that they were doing.  I assumed there would be other Minnesota artists, singer songwriters, but when I saw who was playing, I was like, “holy shit.”  I get to be on the same bill as Bernadette Peters and the St. Paul Chamber Orchestra and all this other amazing music?  I decided to work a bunch of my songs, and I will be performing them with a string quartet, and a small choir.  Three or four other singers.  I am super excited to see the space.

CW: Awesome, I am looking forward to the show as well.  How about the Eaux Claires festival?

HB: I honestly probably know about as much as you do at this point.  Justin [Vernon] has been working on it for the last year or so.  I remember him talking about it, but I had no idea it was going to be of this stature…

HB: It’s amazing, and when they asked me to play it, I was like “of course!” Then I saw who else was playing…  “that’s awesooooome.”  It will be the event of the summer.

CW: Any other shows coming up?

HB: Gramma’s Boyfriend has a show in May, but really I am in writing mode.  I am going to record the songs as I am in the moment after writing it.  A day here, a day there.  Piece it together. 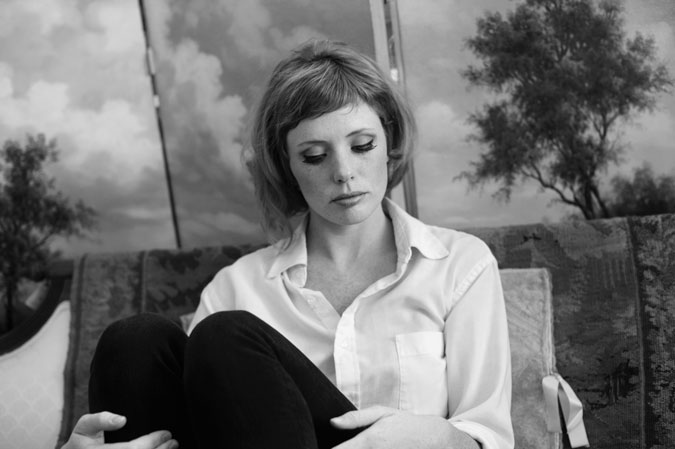 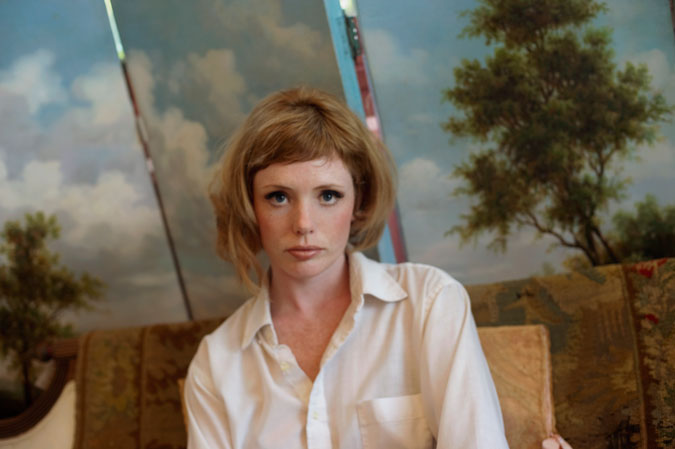 CW: Any plans on if it is going to be a loud record, or back to…

HB: I don’t know.  This record is going to be weird.

HB: It’s not exactly loud, but there are some intense songs.

CW: Do you have any surprising cover songs that you have performed or would like to perform?

HB:  Not really.  I like covering “Yer So Bad” by Tom Petty…

CW: Can you talk about your involvement with Prairie Fire Lady Choir?

HB: I’ve not been involved, or in it, but we performed one of of my songs with me at a show, and it was awesome.

CW: It’s pretty awesome.  My wife and I were checking out videos the other night, and I have to say, their version of “No Scrubs” [TLC] is pretty amazing:

CW: The last question that I have is…  I have been hashtagging every NewsWhistle piece that I tweet out #musicisachoice.  I find a lot of meaning in that, kind of like listening to a record verses whatever comes out of a crappy radio station requires decisions.  Does that make any sense at all, or does that phrase mean anything to you?

HB: I think that’s good.  I like the sentiment.  Especially now… there is less of a commitment to music these days.  You can buy just a song, or not buy it all.  You don’t have to commit to following an artist at all.  It’s different kind of relationship.  It is rare when you find someone who has invested their time with an artist.  When I meet someone like that it, it is so cool.  I am grateful that they took the time to buy the vinyl, and what to talk about it.

CW: I was interviewing Matthew Ryan recently about his most recent album, Boxers, and we talked about vinyl.  He talked about how you can’t be a passive listener when listening to a record, and that got me thinking about “music is a choice.”

HB: I just took out some of my old 7 inches the other day, and it was cool to think about how people only listened to music in this way.

CW: Well, that’s about it.  Thanks for lunch, and taking the time to talk to me.  Stay warm!

HB: No problem.  Thank you.