The End and The Beginning: A Q&A with Michael Dweck

In June of 2004, we received an email alerting us to a party celebrating the launch of a photo book called The End, a collection of photographs by Michael Dweck, who had documented the surfing culture of Montauk, Long Island.

Back then, the $75 book was a little controversial. Some locals weren’t thrilled that it focused more on naked beauties than the actual surf culture found on (and around) the Ditch Plains beach.

But times have certainly changed.

Michael has become an international name. The End was just reissued for nearly 50 times its original price. And Montauk residents now wish they had those Dweck-ian days back, instead of facing today’s much larger crowds.

For us, 2004 was an amazing time, a fast, thrilling and creative summer. Little did we know that all these years later we’d still be friends with Michael, following his career and cheering on his many successes.

We feel very fortunate — and we’re thrilled you’re about to get to know him, too. 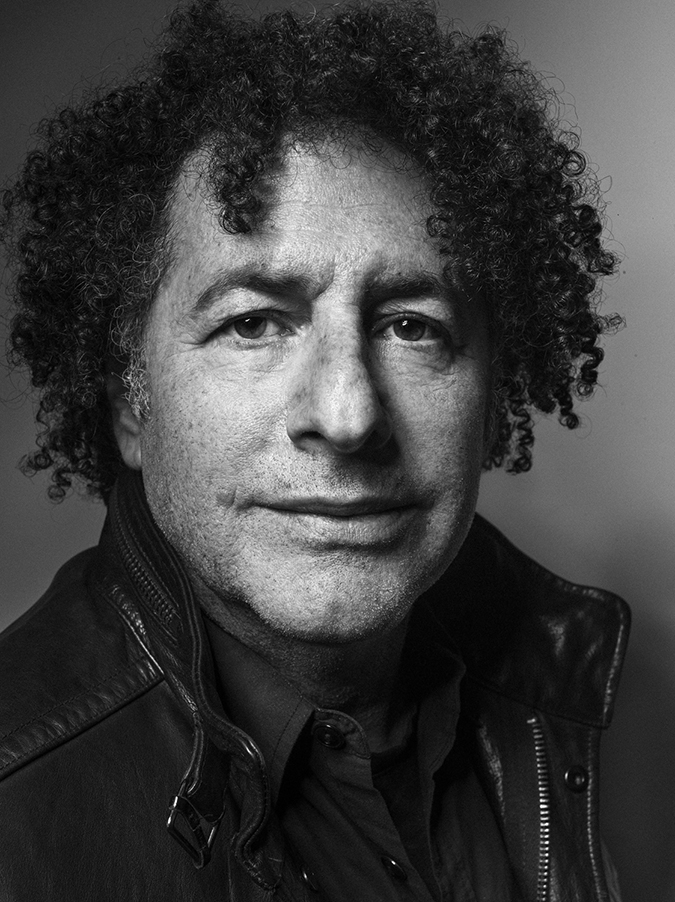 Hmmm… open-ended questions are always tough for me. I’ll just say I’m an artist from New York… That puts me in good company without making me seem too pretentious, right? 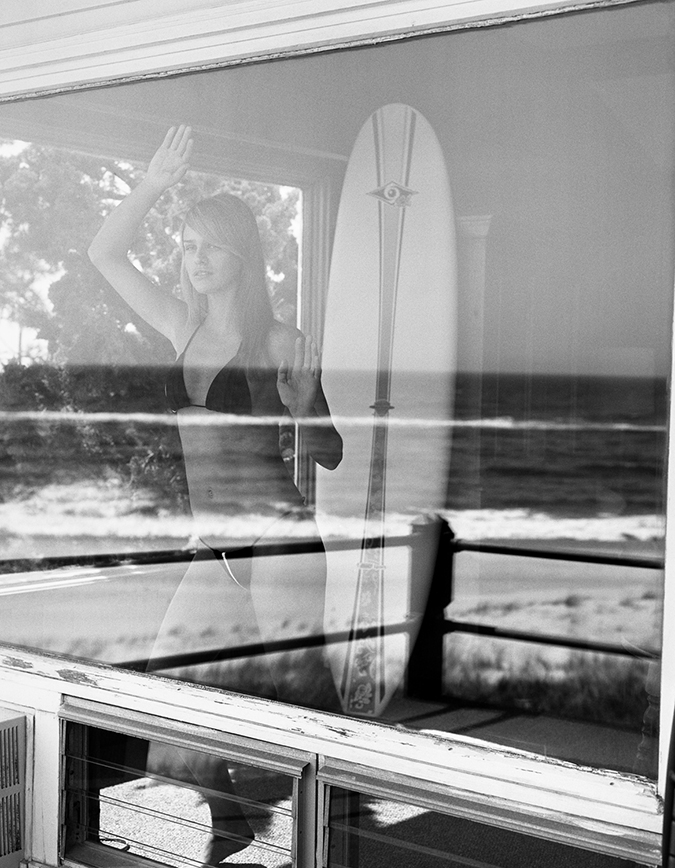 2. Why and when did you become a photographer?

My parents gave me a camera when I was seven, so I’d probably start there. (That’s not to say that everyone with a camera is a photographer, per se, but I think I felt something of a nascent fascination taking root from the very beginning. It’d be quite a few years before I would consider myself a “professional” photographer, but if we’re basing identity on intention over capacity, I would say, yeah, seven years old.

The “why?” is more difficult, because it evolves – or should evolve, at least… It’s like with music: If you ask most male musicians why they started writing songs or playing guitar, they’ll almost all say “for the girls.” Thirty years later, they’re not saying that anymore… It’s similar with most artists – impetus shadows impulse. 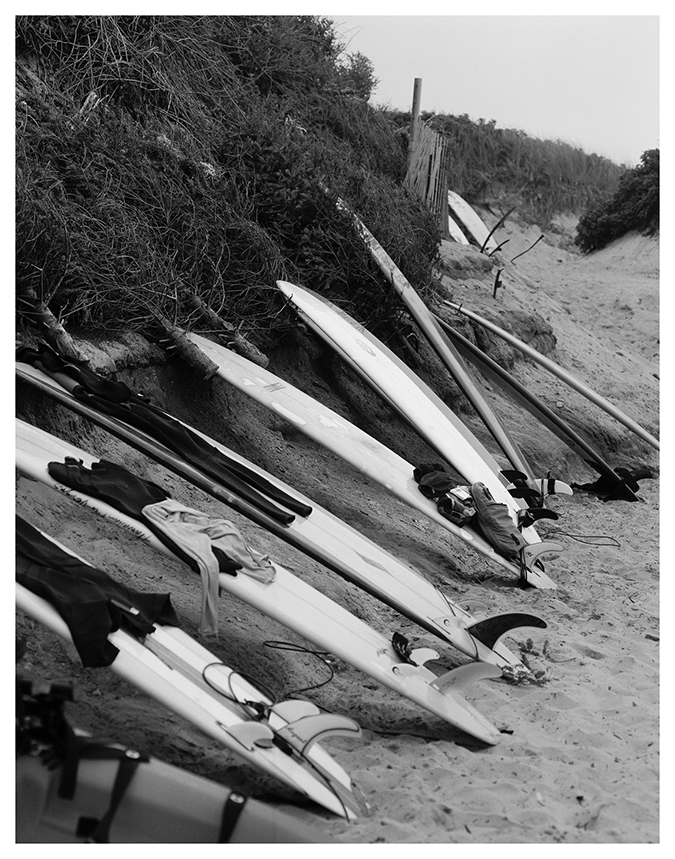 3. Why did you choose New York as your base? Any tips or suggestions (hotels, restaurants, sites) for people traveling to your part of the world?

New York has always been my home in one way or another – there was never really any choice to it. I guess I’m lucky in that way – I was born in a singular and electric environment and have never had to flee… Sure, some of that is a subjectivity shared by natives to any place – but either way, I love it here…

I love other cities too, and I’ve been lucky as well to travel quite a bit – but New York is home.

As far as tips are concerned, I’d say, “save and dig,” meaning, respectively, “New York is expensive,” and “So much of the true culture and history of the city has been plowed under by corporate bulldozers and capitalist wrecking balls – BUT, if you look in the right places, and meet the right people, you can still have an authentic, affordable and rich experience here…” (As you could probably imply from those comments that I don’t want to name names… The bulldozers – and the Bridge and Tunnel crowd – are always listening.) 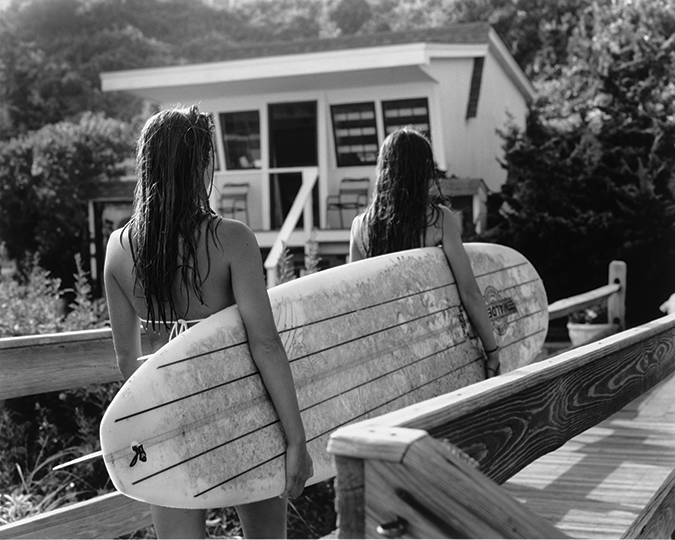 4. What’s the funniest or saddest thing that’s happened to you this week?

It’s the summer of an election year – everything is increasingly sad to the point of hilarity. I’ll leave it at that. 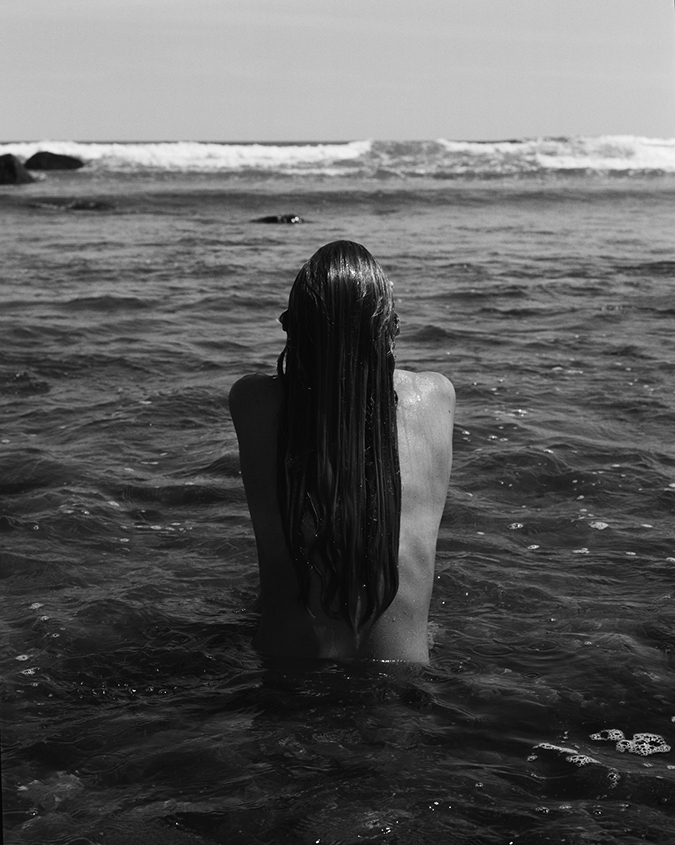 5. What’s your favorite movie? And why?

The Godfather is close to perfect in my book. From an artistic perspective, it speaks to the potential of film as a craft that can inspire all other mediums (visual art, writing, performance, etc…) It’s also one of the few films whose appeal can evolve as you age… you can like it at 15 as a crime saga, and as an adult as something on par with a Homeric legend or a multi-generational chronicle. The performances, the cinematography, the scope, it’s magnificent.

As an honorary mention, I’d be remiss if I didn’t mention Blunderbust which will be my first feature length film. How could I describe it – let’s see, maybe: The Godfather of documentaries about endangered and endemic race car tracks on Long Island? (In its own way, it’s also inspired other work as well – albeit the works are also by me. It will be presented with a complete museum show comprising sculpture, photography, paintings, and other work… so stay tuned for that.) 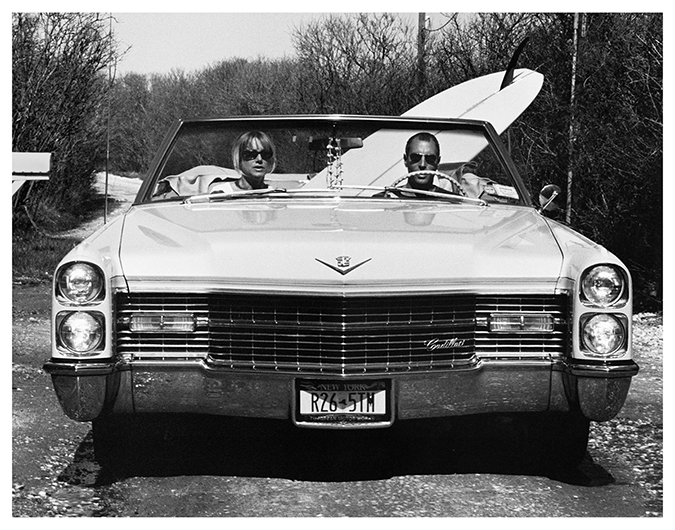 Dave and Pam in Their Caddy, Courtesy of Michael Dweck (Ditch Plains Press).

6. What’s the biggest risk you took in life?

Probably closing my agency and transitioning from advertising to art. At the time, I had two children and a mortgage in New York… It was by no means a particularly wise or safe jump, but – as I said – it was something I had been priming myself for since I was seven. In my mind, I was already more of an artist than an executive – nevertheless, it was still quite a transition and a gamble. 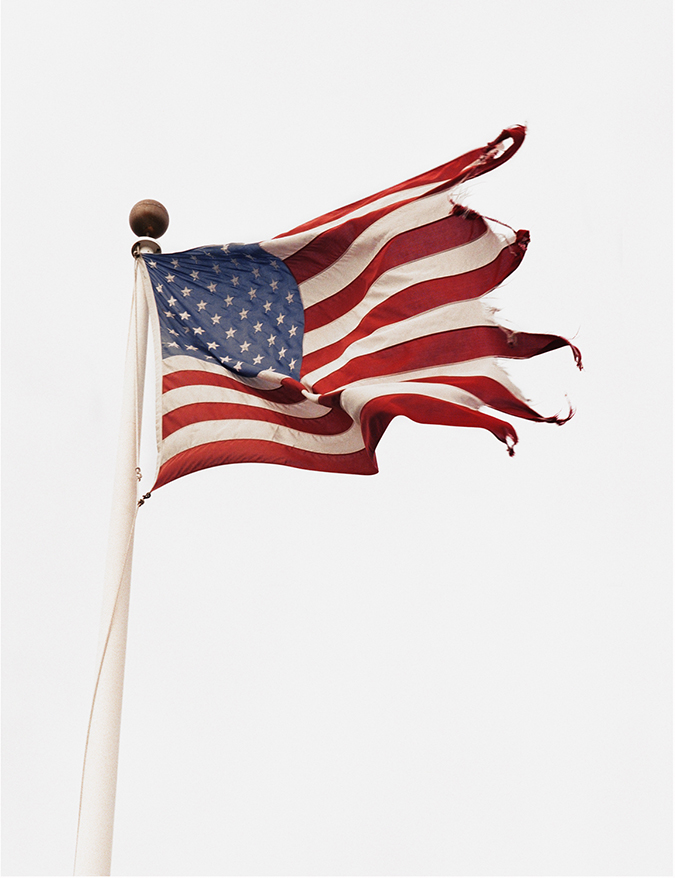 7. If you could go back in time and do one thing over, what would that be?

I’ve had some pretty unfortunate hairdos – maybe I’d nix a couple of those?

8. Tell us your favorite joke:

Heisenberg gets pulled over by a cop.

Cop asks him, “Do you know how fast you were going?” 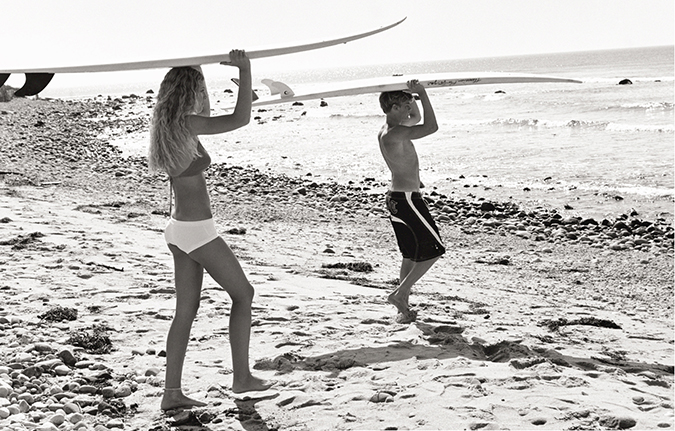 9. What’s something that most people don’t know about you?

I like jokes about physics… oh, wait, I guess that cat’s out of the bag. (Unless, of course, it’s dead…)

10. What’s the best piece of advice you’ve ever heard?

This isn’t advice, per se – more of a way of looking at the world – but there’s a famous quote by Paul Klee I really like:

A line is a dot that went for a walk…

I try to filter a lot of questions through that notion – it’s simultaneously an endorsement of reinterpretation and analysis, and a rejection of delusion, myopia and a staid, safe status quo. 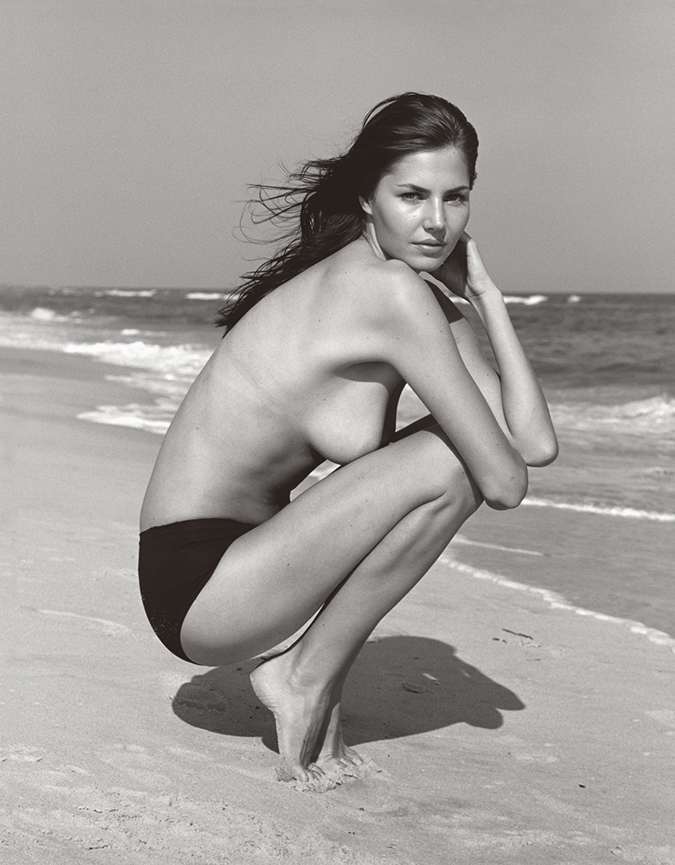 11. What’s been the worst photography trend of the past five years? The best?

12. What should collectors ask themselves before buying one of your images?

I don’t require a lot of explanation from collectors. I mean, I don’t care why people like my work.

It’s great if they approach my work with a scholarly understanding of my method and intention… but it’s also great if my work speaks to someone else for reasons he or she can’t articulate. Both are beautiful reactions to art.

I don’t mind straight investment collectors either. It’s a compliment to see my work as an investment. Now, that’s not how I see my work, but… Who cares, right?

Ask yourself, “Do I want this?” 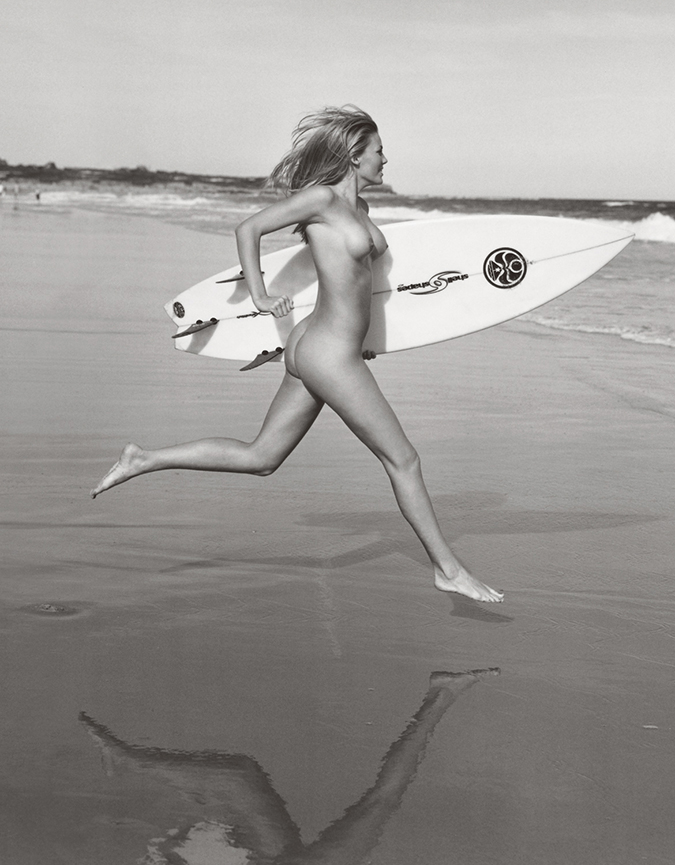 13. Who are your photography idols? Why? Have you ever met them? If so, what happened?

I don’t really idolize photographers – or anyone for that matter. I look up to a lot of painters and artists and filmmakers (de Kooning, Richter and Newman for painting, and Antonioni, Malick, Coppola, and Kalatozov for film).

But I think it’s dangerous to idolize a person – any person. It creates a projected relationship with debt and expectation… You can’t create or appreciate anything honestly on either side of that kind of relationship… That’s just my opinion… maybe it’s just a semantic issue with the word “idol”…

14. Who are some up-and-coming models and photographers? Why should people watch out for them?

Can I skip the first part of the question, and answer the second by pointing back to my answer about collectors? People should watch out for anyone on either side of the camera who moves them in ways they can or can’t understand.

I’d say, don’t wait for someone to give you permission to like or dislike something. I often find that the loudest advocates for anything – the ones telling you how or what to think – either a) have an agenda or b) have no idea what they’re talking about.

I like that big trained grizzly bear they use in all the outdoor movies… what’s his name? 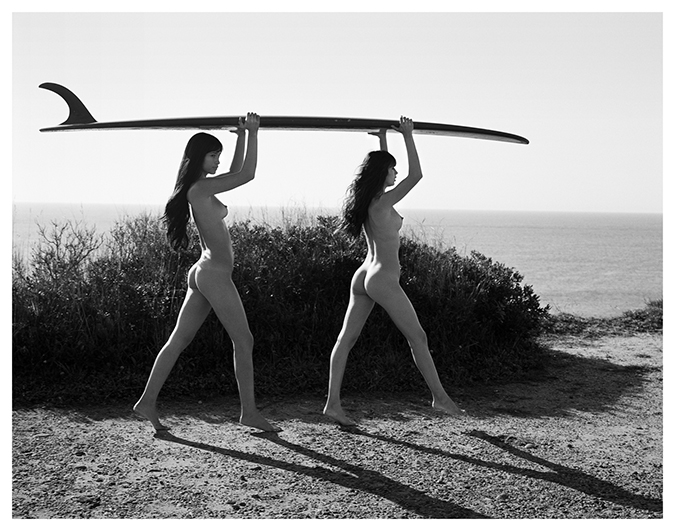 16. What’s your strangest phobia or superstition?

I’m afraid I don’t really have one.

Does that have a name?

17. What’s the best photograph you ever snapped?

I have to keep pretending I haven’t snapped it yet, or I won’t ever.

Does that make sense?

There are many that come to mind – more that I’ve already forgotten too, I’m sure.

But it has to be something in Montauk. Maybe freshly caught tuna in Montauk, where you pull it in, and clean it, and an hour after catching it, we’re sharing the sushi with family and friends in our the beach shack. I can’t imagine anything in a restaurant beating that.

Catching it yourself. Eating without shoes on. Not having to tip, or send some overworked waiter back and forth to the kitchen… Those are the best meals. 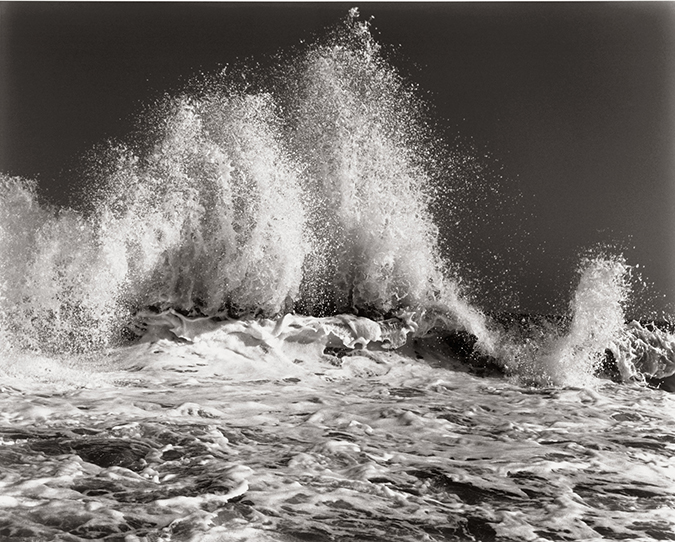 19. Do you have any advice, or quick tips, for budding photographers, especially those that like to shoot people in motion?

Just get in there and get at it… Shoot whenever, wherever and whatever you can. If it’s fun, do it for free, if it’s worth it, do it for money – and never ever confuse “fun” for “worth,” because you’ll end up resenting the art and hating everything you do…

It’s that easy… it’s that hard too.

20. Last, but not least, is there anything you want to pitch, promote or discuss?

I just released an expanded 10th anniversary edition of The End: Montauk, N.Y. which is available in very limited quantities through select dealer and our website Ditchplainspress.com.

I’m really happy with the way the project came out… It was kind of my attempt to look back – ten years later – on timelessness, and dig through a lot of contradictory feelings about a certain place and/or a certain time.

It’s funny – in a way, the project comes to the same conclusions as Heisenberg’s Uncertainty principle (which I referenced in that joke): you can either know exactly where you are, or how fast you’re moving away from it… but not both.