I remember watching that crazy video to “Rockit” and I clearly remember that every time we heard this song it was impossible to control our bodily dance movements on the front stoop.

Yep, I  tawked like that and I also said things like “up your nose with a rubber hose.”

I have said this in front of my kids in which they respond, “Mom, just stop.”  Just to know.

Of course, at the time I had no idea that Herbie Hancock was a child prodigy, a classically trained pianist and that twenty years earlier he joined Miles Davis’s Second Great Quintet.

Many years later I recall hearing River: The Joni Letters, which is Hancock’s tribute album to Joni Mitchell.  When I realized it was Herbie Hancock I said, “The Rockit guy???”

On November 14, Grammy Award winner Herbie Hancock played at the Salle Pleyel in Paris and I can add this event to my just pinch-me list. Just to know. The reception he received from the French audience was overwhelming.

I looked around the “public” (audience) and could not believe the age range in attendance, which is common here.  I am often amazed at the level of music knowledge younger people have in this country.  They know music or their parents did a great job exposing them to music at an early age.

My young neighbors once had a loud party once that woke me up.  As I started to get dressed to knock on their door and kindly say, “S’il vous plait” (please), “baisser la musique” (turn down the music),”  I couldn’t help to notice all the great music they were playing. I thought how the hell do they know this?  Are their parents at their party? Probably.  Instead, I finished getting dressed, grabbed a bottle of wine from my placard and knocked on their door. It was not like I was going to get sleep anyways. So I joined the party.

I don’t know what it is about watching “spectacles” (shows) with the French, but their energy is so powerful especially when it’s an American entertainer performing in front of them. What a fabulous feeling  to be surrounded by people that truly live for art… and oysters.

Monsieur Hancock arrived on stage and the room just burst into applause and a well-deserved standing ovation.  He took a moment to talk to the audience and shared with us that the first time he came to Paris was with Miles Davis.

The French went “complétement fous” (completely crazy) and I immediately got goosebumps all over my body.

Here is an excerpt of what he said tonight. This was after a “mec” (guy) yelled out in a strong French accent: “I love you.”

Herbie responded:”I love you guys! You love music,  you love the arts. And that’s so important.  I think it’s important for the human soul.”

This was one of the funkiest jazz concerts I have ever attended and yes he did play snippets of “Rockit” but a sultry, smokey version of it which was way cooler for this event.  He did the same with “Watermelon Man” and “Actual Proof” but thankfully in their original versions.

Yes, Herbie Hancock performed this week in Paris, and he played with these super talented musicians: James Genus on bass (currently plays on the SNL band); Lionel Loueke on guitar and vocals; Justin Tyson on drums; and Elena Pinderhughes with flute and vocals.

Thanks, too, to my mad scientist friend who scored me a ticket.  What a night.  It was “Dyn-o-mite!” 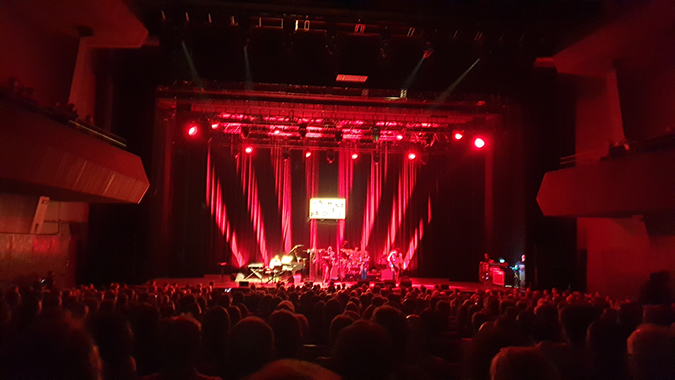