Funny thing about math—at its simplest, apples to apples and oranges to oranges, it’s not supposed to be debatable.

British philosopher Bertrand Russell, one of the great mathematicians and analytical minds of the twentieth century, once stated: “Mathematics take us into the region of absolute necessity, to which not only the actual word, but every possible word, must conform.”

Hollywood has never been a place where conformity is a virtue or an absolute, and that includes mathematics. There’s a term that’s thrown around quite a bit in Tinseltown: Funny math.

That philosophy seems to be the driving force behind Lionsgate’s sequel “Mechanic: Resurrection”, the final of the eighteenth continuing sagas and/or reboots of the summer 2016, arriving five years after CBS Films’ original debuted with a ho-hum $11M and $62M worldwide.

Those numbers aren’t great; they’re hardly good, in fact. And when you factor in the $40M budget, plus an aggressive PA campaign, then take out at least half for theaters…what are you left with? Diddly, and a little bit of squat. And that’s being generous.

Post box office revenue streams can be lucrative, sure, as are cable rights, however “The Mechanic” was one of Jason Statham’s least recognizable action flicks over a very prolific period in his career.

In fact, audiences were bombarded with Statham’s one man wrecking crew routine as the “The Transporter” and “Crank” franchises combined for five films over a seven year stretch in the 2000s—and only one of those movies topped $40M domestic.

Still, someone, somewhere—besides Statham—must be making money at Lionsgate or they wouldn’t keep investing in him as “Mechanic: Resurrection” is his 11th film for the company in the last 10 years.

The R-rated sequel assaults 2,200+ theaters this weekend—about 500 less than the original—and might be able to crack $10M if it’s lucky. Truth is, outside of ensemble pieces—“Furious 7,” “Spy” “The Italian Job” and “The Expendables”—he’s never had a $100M hit, or $50M for that matter, to call his own.

The other three wide releases—Weinstein’s boxing pic “Hands of Stone,” Roadside’s “Southside With You” and Sony’s chill pill “Don’t Breath,” will have limited reach, as we are firmly in the dregs of summer.

This weekend through early September are the dumping grounds for studios filled with wayward filmic fiascos and instantly forgotten flicks; people are out grasping the last rays of summer instead of taking comfort in air-conditioned confines featuring the flickering of light.

These are dark days in multiplexes as Paramount learned last weekend, as their $100M epic fail “Ben-Hur” launched with just $11M, debuting outside the Top 5 and behind the two other newcomers “War Dogs” and “Kubo and the Two Strings.”

“Don’t Breathe” hopes it can ride the crimson wave of bloody dripping great profits this summer for the horror genre with “The Conjuring 2,” “Purge: Election Year,” “Lights Out” and “The Shallows” all performing solidly—none of them debuting with less than $16M and all becoming wildly profitable.

Sony’s latest arrives from Uruguayan director Fede Alvarez, who successfully resurrected the studio’s “Evil Dead” remake as it grossed-out nearly $100M worldwide on a budget of $17M. It was also damn good, which coming from someone who spouts off the merits of Sam Raimi’s original trilogy like a gusher of blood to the face, is a pretty big deal.

Sony and Alvarez spent even less on their second collaboration, as “Don’t Breathe” sneaks into 2,700+ theaters carrying just a $10M price tag and is probably the only film that has a chance of knocking off “Suicide Squad” in its fourth weekend.

Let’s roll the dice and say “Don’t Breathe” comes out #1 with $15M+ this weekend, stopping “Suicide Squad” in its tracks as DC’s anti-superhero flick and “Finding Dory” will tie, becoming the only films to top the domestic box office three weekends in a row this summer.

And then we have “Hands of Stone,” Weinstein’s only wide release of the summer, and only their second of 2016. In fact, they haven’t released a film in over 1,000+ theaters since January.

You’d think since that’s the case, they would have thrown a little money around for a film starring Robert De Niro and especially one trying to court Latino audiences. Not the case here, folks.

In a bit of meta moviemaking, Roadside Attractions’ “Southside with You,” a film about Michelle and Barack Obama’s first date on the southside of Chicago, also courts 800+ theaters and might surprise this weekend with around $5M.

In exclusive release there are a number of interesting choices this weekend, including John Krasinski’s “The Hollars” and Gus Van Sant’s “The Sea of Trees.” The latter has a dubious distinction of a 0% on Rotten Tomatoes as of this writing. That can’t be good for business. Van Sant’s latest stars Matthew McConaughey and Naomi Watts.

There aren’t many trailers that can leave you choked up in 2:30–this is one of them. Kenneth Lonergan’s (“You Can Count on Me”) latest has been tabbed as a serious Oscar contender and Casey Affleck and Michelle Williams are both put through the wringer of emotions here. Can’t wait for this one.

There is a very good reason Open Road Films hasn’t set a North American release date for this film yet. In fact, after seeing the international trailer, I’ll be surprised if it ever gets one. “Max Steel,” based on the Mattel’s toy line should be exclusively shown as a double feature with Paramount’s “Monster Trucks” for MST3K to hilariously dismantle.

It used to be when your career was winding up, you started doing family films featuring animals or kids, now, you’re shipped off to China…and lemme tell ya…it ain’t bad.

Johnny Knoxville and Jackie Chan’s respective careers have run their course in North America, however in Chan’s native China he’s still a big draw, and his latest, “Skiptrace,” directed by none other than Renny Harlin, is a massive $100M+ hit on a tidy $32M budget.

Despite that fact, it won’t even see a traditional domestic release in America from distributor Saban Films, who rarely releases box office grosses even when they do quietly drop their films in theaters.

Hey, it ain’t over till the fat Chinese lady sings. 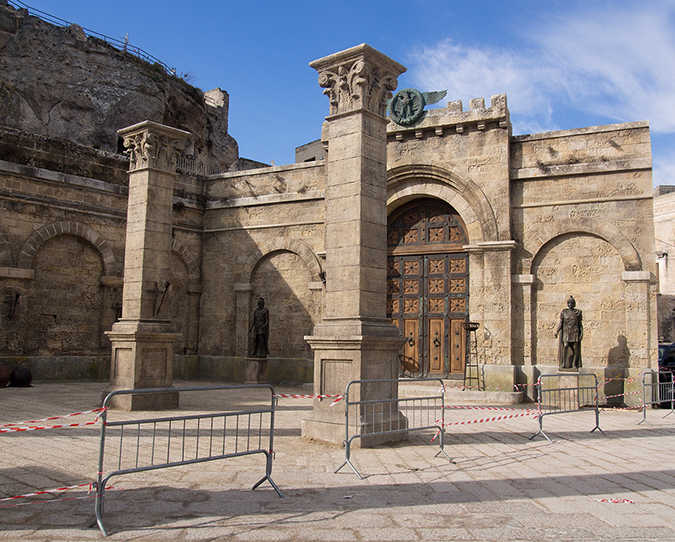 Image: “Feb 21, 2015 – Matera, Italy: An outdoor movie set built for the remake of Ben-Hur, being shot in the popular tourist town of Matera.” ; Courtesy of elissa1000 / Shutterstock.com