“Something there is that does not love a wall…” — Robert Frost, “Mending Wall”

Margaret Dorsey is an anthropologist, but rather than studying remote tribes in exotic places, she is studying a cultural phenomenon taking place here in the United States: the creation of the Border Wall (officially known as the Mexico-United States Barrier) in Texas.

She and her partner, Miguel Diaz-Barriga, both professors of Anthropology at the University of Texas-Pan American, have been focusing their attention on the Border Wall and its impact on local culture, landscape, and environment, and have been documenting it through photography, research, and interviews with community members and local politicians.

They’ve actually become experts on border barriers generally. Many of us remember quite well the fall of the Berlin Wall in 1989 and the optimism, hope, and celebration associated with the event. In the intervening years, however, 33 new such walls have been constructed, all over the world: separating Spain from Morocco, Botswana from Mozambique, and India from Bangladesh, to name a few.

Barrier walls aren’t new, of course: the Great Wall of China is perhaps the most famous one in history. The ancient Romans had a god who protected boundary markers (Terminus), who was honored annually with rituals and sacrifices. But as Robert Frost famously wrote in “Mending Wall”:

These new walls share goals of walling out: asylum seekers, undocumented migrants, terrorists, and smugglers. The United States views the Border Wall as an important element of the War on Terror.

Critics argue that physical barriers such as walls cannot hold back ideology or terror tactics, that they’re ineffective and expensive deterrents, that they jeopardize the health and safety of those seeking illegal entry, and that they have detrimental effects on the natural environment.

Margaret (and Miguel) would like to bring their work to a larger audience than their fellow academics and the students they teach; they are working on a book about their study of the Border Wall, which they are striving to make broadly accessible to a general readership.

Now they are trying to reach yet another audience, this time through a planned exhibition they are curating at an art gallery in Manhattan. Through apexart’s Unsolicited Proposal Program, they recently entered a competition and theirs was among three proposals selected: http://apexart.org/up2015/results.php

The art they will be exhibiting is going to explore how the U.S. might reassert a more populist notion of sovereignty by reimagining borders and border walls, and what alternative plans for border walls might look like. They plan to include photography, architectural designs, and some public lectures, as well as the work of artists who have featured their work on the Mexican side of the Border Wall itself. It promises to be a fascinating and thought-provoking exhibit, and one I am looking forward to seeing next year.

I caught up with Margaret on a beautiful, clear, and unseasonably warm January afternoon, over a delicious lunch at French Louie, in Brooklyn.  After a leisurely meal with some French wine and Belgian style ale, we stopped in at Stinky BKLYN to pick up some chocolate, and then went out for cocktails at Clover Club, where we met an affable bartender with impressive hair, ate crisps (what the English and, apparently, the Brooklynites, call potato chips) fried in duck fat with truffle crème fraiche, and sampled a Champagne-based drink poetically called “Meet Me in Montauk.” Here’s some of what we talked about, edited and condensed for clarity: 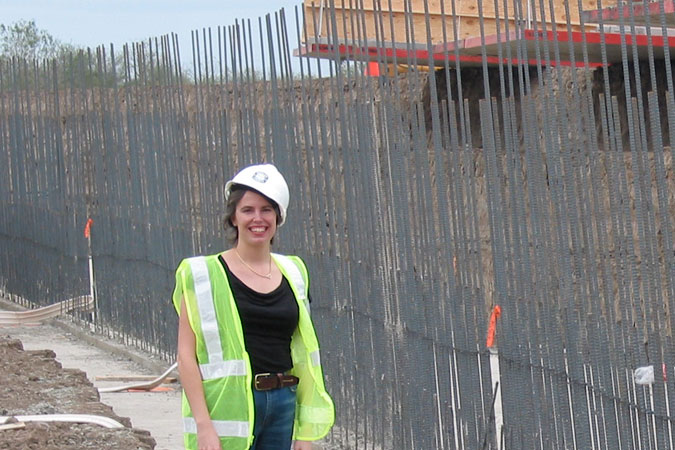 Date of interview: January 23, 2015
Age: 41
Hometown: Corpus Christi, TX
Current town: Brooklyn, NY
Occupation: anthropologist / college professor [Margaret and Miguel are Visiting Scholars at Brooklyn College: He is the Zicklin Chair and she is a Visiting Associate Professor of Anthropology]

Why did you decide to start studying walls?

My partner and I were conducting research on immigration in the U.S./Mexico borderlands. When we learned that the Border Wall was both projected to be built, and that it actually seemed that it was going to happen, we decided to shift our focus.  Immigration and border security do have a shared and complex history on the policy level.

What are your personal views on border walls?

I find them fascinating from an architectural standpoint.  On a human and humanitarian level, I do not see how they are making life better for residents of the borderlands.  I do see, however, how capitalists benefit from their construction and maintenance.  It’s a booming business globally–especially if you include the constantly widening human and electronic security net that seems to have a symbiotic relationship with 21st century border wall construction.

What is the strangest border wall you’re familiar with?

Intellectually, the Mexico-United States border wall is the strangest.  Mexicans inhabited Texas, New Mexico, Arizona, Colorado, and California before the United States did.  The United States gained control over these territories after marching troops to, and occupying, Mexico’s capital, Mexico City. During this period, we had them ratify the Treaty of Guadalupe Hidalgo, which transferred a vast portion of land to the U.S.  Here in the U.S., we don’t read much about our occupation of Mexico.

My point is that while the U.S. has a history of aggression toward Mexico, and many of the border state inhabitants are Mexican-American with ancestors who trace their roots to the 18th century, and that we have maintained strong trade and cultural ties with Mexico over the centuries: why do we need an ugly and expensive wall to separate us?

Many Mexicans call it “the wall of shame” or “the wall of hate.”  Why does U.S. policy as manifested in the wall speak a language of hatred to one of our best trading partners?  It’s odd, no?

What is the most innovative wall?

His wall would be built with solar panels, and promotes bi-national cooperation. It would provide solar energy, water purification, communications, and trade.

What is the scariest wall?

Along the Zimbabwean border there is an electrified fence.

And the Berlin Wall in its late iterations was one of the scariest and saddest to me. It actually was a formidable set of fortifications, but it also stood for the Cold War, and a time when the U.S. promoted democracy as an alternative option to totalitarianism.  Many of us saw the fall of the Berlin Wall as the beginning of a new era of democracy and civic freedom.  Instead, it marked the beginning of the proliferation of walls globally, and highly lucrative business–reminding us of and symbolizing neoliberalism’s preeminence.

What is your favorite wall?

Rael’s remains my favorite, but I do also appreciate architect Jim Brown’s proposed redesign of Friendship Park in San Diego:

What is the most fascinating thing that you’ve discovered while researching walls?

That more nation states keep building them and expanding those that they have in place, and that these very same nation states seem to show little respect for the lives–and the quality of the lives–of border residents.

And while many people see them as an end, or as the end, they are only the beginning. 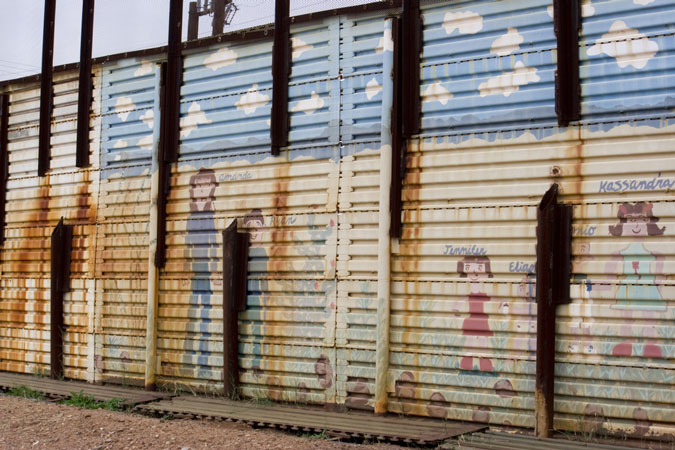 “School kid decorations on the US to Mexico border wall in Arizona,” Gila Photography, Shutterstock.com

What’s the best thing that’s happened to you this week?

My leg brace came off! (The injury was nothing very glamorous or exciting…I injured myself tripping over a curb.)

Leaving Europe to return to Texas.

I’m an introvert. People assume I’m extroverted but I’m not. I took a test! 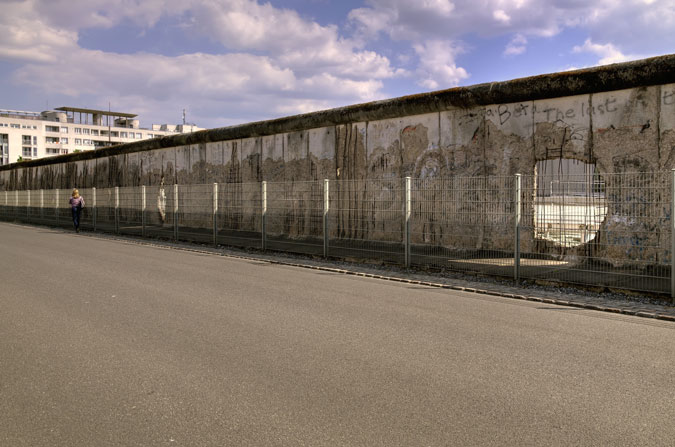 “The Berlin Wall (Berliner Mauer) in Germany. Hole in the wall, barrier constructed in 1961, that completely cut off West Berlin from East Berlin, demolished in 1989,” Mag Mac, Shutterstock.com

That one’s easy. You read to re-read and you write to re-write. It’s like a sports metaphor for academics: you get better with practice.

I’m not sure if it’s a phobia, but some people just scare me. I don’t want to get near them.

Why do you go to bed at night?

Because the bed doesn’t come to you!

Yes! Our book on the US/Mexico border wall isn’t out yet, but you can read my other one: Pachangas: Borderlands Music, U.S. Politics, and Transnational Marketing, which is about how corporate culture is changing the traditions of the Texas/Mexico border, and also how local cultures can have an influence on multinational corporations.

And we are giving a talk at Princeton in April, if people want to learn more about our work: http://www.princeton.edu/plas/events/viewevent.xml?id=214

And people should come see our exhibition next year, Fencing in Democracy, at apexart: http://www.apexart.org/