It’s no surprise really that the top three grossing films of the year in North America are sequels—“Finding Dory,” “Captain America: Civil War” and “Rogue One”—however, for as many success stories that serial cinema witnessed in 2016, it was also a horror show for many franchises.

Studios’ safety nets didn’t just show wear and tear, but were mercilessly shredded as continuing sagas, across the box office board, stopped, dropped, and severely flopped.

It’s the end of the line for these series….for now. As we know, Hollywood will reboot and rewire anything if there’s a buck to be made. It may just take a couple decades for these franchises.

10. NEIGHBORS 2: SORORITY RISING (Universal) – The real problem with sequels of late—studios don’t want to wait more than two years for another installment. There’s a reason this grossed $163M less than the original worldwide: it was undercooked and unoriginal. With a comedy sequel, the laughs have to be twice as good, which “Zoolander 2” also suffered from. Both films seemed happy just riding the original’s coat tails, and, as such, audiences snuffed them out for what they were: cash grabs. Surprising moviegoers with something new is why fellow R-rated flicks  “Bad Moms” and Seth Rogen’s own “Sausage Party” performed vastly better.

9. X-MEN: APOCALYPSE (Fox) – Bryan Singer needs to stop pulling the strings. That’s readily apparent as his latest version scored $200M less than “X-Men: Days of Future Past,” and significantly less than the X-Men spin-off, “Deadpool.” Ryan Reynolds’ flick grossed more than “Apocalypse” by $240M…and that was with an R rating.  Certainly, $543M is nothing to scoff at, but there is more…much more…to be mined here as we are living in the golden age of spandex. Time to go in a new direction, and maybe cut Marvel back in on the action.

8. STAR TREK BEYOND (Paramount) – This certainly won’t be the end of the line for the franchise, but when you make over $120M less than the last installment, you know there are some big issues to shore up. First off, don’t spend $185M to make a “Star Trek” flick. Second of all, to engage more audiences, each future installment has to be more than what amounts to an extended episode.

7. TEENAGE MUTANT NINJA TURTLES: OUT OF THE SHADOWS (Paramount) – 2014’s “Teenage Mutant Ninja Turtles” reboot proved that turtle power was back in full force as the $125M production shell-shocked audiences to the tune of nearly $500M. Paramount rushed the $110M sequel in production and it sputtered with just $245M. Gotta dig a little deeper in that Hasbro bag…or just concentrate on making Transformers flicks.

6. INDEPENDENCE DAY: RESURGENCE (Fox) – It’s not that you can’t bring a franchise back 20 years later; just make sure you know the difference between a pop culture phenomenon and a cinematic classic. “Independence Day” has not aged well, and it didn’t help that the original rode the hype train of Will Smith, who was noticeably absent in this one. Not that it would have helped, mind you.

5. INFERNO (Sony) – Dan Brown and Tom Hanks had seemingly uncovered a true box office treasure when the first two installments of Brown’s mega-popular, best selling book adaptations, “The Da Vinci Code” and “Angels & Demons,” grossed a combined $1.25B worldwide. Problem was, the writing was already on the wall, as the sequel grossed $250M less than the original. The threequel followed the same trajectory, dropping another $250M, and just $34M domestic. Book…end.

4. THE HUNTSMAN: WINTER’S WAR (Universal) – Trying to make a fairy tale adaptation without the words “Disney presents” in front of it has proven to be nearly impossible for studios. That said, Universal’s “Snow White and the Huntsman” grossed nearly $400M globally in 2012.  Outside of The Mighty Thor, Chris Hemsworth’s box office appeal has proven to be merely mortal, but even so, Universal decided to bring the Huntsman back instead of Snow White. That proved to be the fatal flaw; the sequel grossed just $164M worldwide, and an embarrassing $48M in North America.

3. THE DIVERGENT SERIES: ALLEGIANT (Lionsgate) – Remember how lucrative splitting the last book in a YA franchise had been for studios? Well, guess what? “Allegiant” performed so poorly that “The Divergent Series” is probably never even going to see a “Part II,” which was titled “Ascendant.”  The original grossed $150M domestic, the sequel $130M and the threequel…just $66M.

2. ALICE THROUGH THE LOOKING GLASS (Disney) – Disney’s doing just fine as they have six of the Top 10 films in 2016 and look to have the about the same amount in 2017. That said, this one hurt, as it grossed just $299M worldwide, following the original’s $1 billion.  Whatever Tim Burton’s sequel fee was, they should have paid it.  This one lost mad money.

1. GHOSTBUSTERS: ANSWER THE CALL (Sony) – Don’t call it a reboot, call it what it was: a rip-off. There is no arguing this, or hiding behind the shade of sexism. Sony had a chance to turn one of the most beloved properties of the 1980s into something really special, maybe even the next “Jurassic World,” and failed miserably. It will be decades before they attempt this again. And the only way to do it right is to make it a continuation of the first iteration, and pretend this one doesn’t exist. And while its box office wasn’t downright awful, it’s the potential earnings that this cost the studio, that is much greater than any other franchise of 2016. 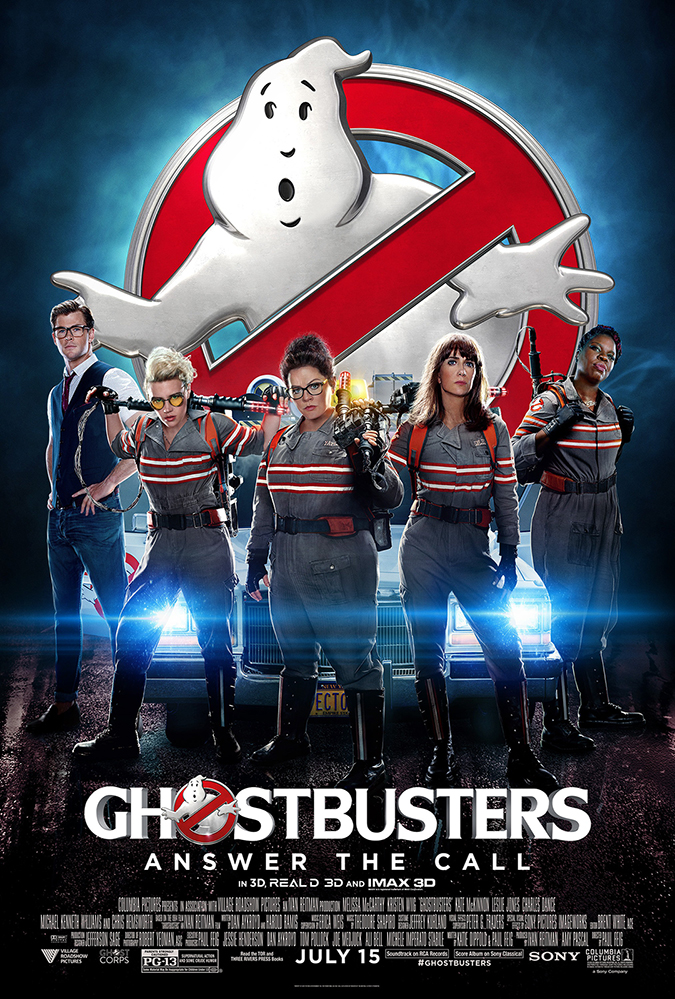