The first week of EPL action highlighted that the teams that came over to the States in the summer still had a little jetlag.  Man United lost at home and of course being the highest profile team in the league the scrutiny on their players and managers was at the very least nauseating.  They will end up spending the same as it would cost to build a hospital wing on players what will only lead to more emergency meetings.

Chelski (they were Chelsea before Abramovich bought them over) swept new boys, Burnley, away and suddenly they are champions.  As former Liverpool manager and legend Bill Shankly remarked, the league is a marathon, not a sprint.  And we are going to keep running till next May.

Speaking of Burnley, it is that small town in Northwest England that our boys — Stuart and Shane Higgins of Brits Pub fame — came from and they managed to sneak a shirt into the pic with the Premiership trophy when it was in Minneapolis recently.  It is as close as anyone with that shirt is going to get to silverware this year.

Speaking of sneaking, it turns out that a EFL rep allegedly tried to make a forward pass with my friend Alyssa at the event but was ruled offside…

This week sees Liverpool square up to Manchester City in a battle between #1 and #2 from last year.  Of course there is no Bitey McShitey (Luis Suarez) on the Liverpool team but former Man City and current AC Milan “mad man” Mario Balotelli is rumored to be on his way to Anfield (the home of Liverpool).  Obviously, Northern Irish manager, Brendan Rogers likes having at least one slightly deranged player in the dressing room…keeps those fancy East European players in check…

I was also at an event recently with our wee software company and had the pleasure of meeting NBC sports sideline reporter, Michele Tafoya (who before that I had never heard of, to be fair. Luckily, she had never heard of Mario Balotelli so we were all good). 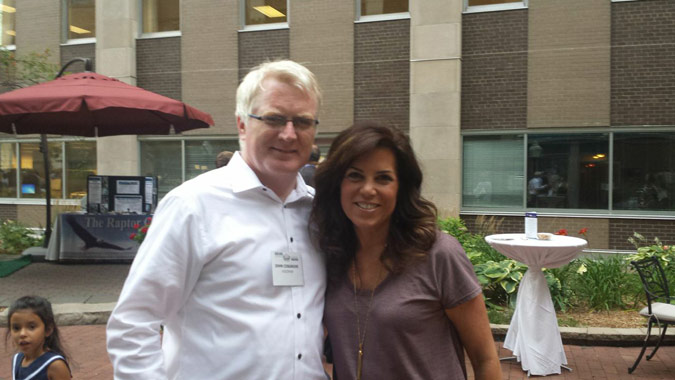