The fall season is here.  At least the fall recreational men’s league soccer is here in Minnesota.  Last year the temperature difference between week one and week six (eight weeks later) was 66 degrees!

One of the great elements of camaraderie of this gathering mix of ex-pats and local plastic wannabe Anglophiles, is the articulate and honest reviews of the previous weekend’s  Premier League games.

Most of  comments would not be printable in a Tarantino script reading, never mind a quality news site such as this.  However, you can be sure that despite bias of one team or another there are some clear facts that are bubbling to the surface, even at this early stage of the season.

1. Man United are shite.  When I mean shite, they were in a terrible place this time last year and that looks rosy red compared to this year’s debacle.  Despite that, they just spent $60 million on ONE player, one Angel Di Maria from Real Madrid.  He is currently undergoing psychological  evaluation to ensure he can maintain some level of sanity until the season ends in horror in May.

2. Chelsea or Man City will win the league.  Jose Mourinho, the Chelsea coach has never gone three seasons in a row without a league title and he hasn’t won the past two.  Manchester City are not even in second gear and are strolling past so called “challengers” like Liverpool 3-1 without breaking sweat.

3. We, the real fans, are getting fed up with the level of gobshitery chit chat by new bandwagon jumping, diet Mountain Dew drinking, parental basement dwelling, twenty-somethings who are exploring their football feelings both online and in the pub.

Here is an actual “chant sheet” put together for new fans to sing in unison while they group together and watch the matches on TV. 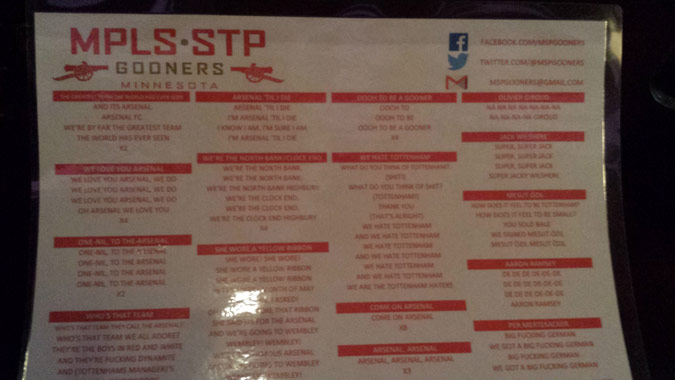 You know, these chants are spontaneous at the actual game.