Stereo Off – the electro-rock group based in New York’s concrete jungle — has held our interest for two years now. We like them and their music a lot.

Their sounds strangely remind us of INXS and Bryan Ferry. And their songs quickly grab you with a healthy helping of upbeat vocals accompanied by several stringed instruments and a keyboard.

Simply put, this music will make you want to put your head down, bob repeatedly, and move around town in your boots.

The NewsWhistle Q&A with Niall Madden and Sebastian Marciano, Stereo Off 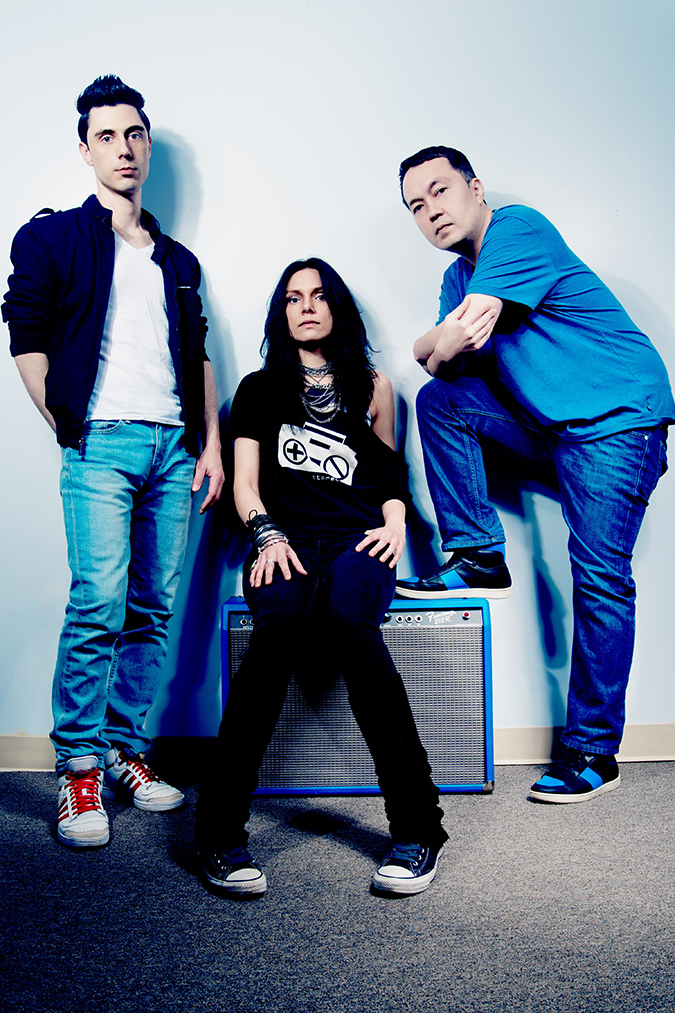 Sebastian: We came to rock your body. The way this happened was, we all met through other musicians years ago, and all have a music-based background.

Niall: I don’t think I was necessarily even looking to be in another band at the point, but it was very much Sebastian getting some friends together and seeing if some new ideas could flow from it. I guess I took up that opportunity and it worked out really well.

2. When and why did you decide on a career in music?

Niall: It’s more a career “around” music (whereas say Bridget is a full-time musician). As for me, I’ve worked in the industry side of it, production side of it, and while my job is more tech and media based now, there’s still some relation, such as promoting the band ourselves.

Sebastian: I don’t know that I ever made a decision, it sort of just became an obsession as a teenager and I cannot stop doing it.

3. How would you describe your music and your style?

Sebastian: Is it electorock or art-pop? There’s plenty of things thrown in there, we like to experiment. As long as it feels like us we are willing to try it and enjoy the craft of it.

Niall: It’s more electrorock on the 3rd EP, that’s for sure. More indie rock on the first one perhaps and a mix of the two on 2nd EP “The Long Hot Winter.” Basically, it is various stuff we like, thrown onto a mix tape, shoved into a tablet and exported out. Digital waste. Refined.

4. Where does your musical influence come from?

Sebastian: Tons of things, for myself 80s and 90s pop and electro of many types, but also the soul classics and older rock tunes. Bridget is highly steeped in classical and new music styles, and films and their scores are big influences on Niall and myself. Vangelis, Shostakovich, Prince, Organized Noise, the Pixies, Doctor Dre, J-Dilla, U2, Guns N’ Roses, The Roots, AC-DC, Sam Cooke, Daft Punk, Peter Gabriel, INXS, Sade, EPMD, and many more.

Niall: A mix of childhood pop hits, teenage hip hop, and indie rock bands started it, while the desire to hear different stuff expanded it into all sorts of directions. One thing I’ve always liked about this band versus previous ones is that everyone seems to have their own translation of the band. At first it was a bit annoying, but now I sort of appreciate that everyone hears things differently. I like some of the artists on Seb’s list above, along with bands like Radiohead, Phoenix, Foals, the Clash, indie scenes like North Carolina in the 90s, UK late 00s, the semi-recent shoe-gaze renaissance and so on.

5. When was your first experience on stage and what was it like?

Sebastian: I was young when I picked up the saxophone and some choir but I don’t remember the initial vibe of being on stage. First I remember was doing vocals on the mic over Dwyck by GangStarr at my high school dance in Manhattan, or on a basic cable show or two and I was pretty stoked.

Niall: Technically a lot of my early experience would be as a stage hand, but I also filled in for various bands in my late teens and 20s on both sides of the Atlantic. Loads of shitty shows. What was my first good experience on stage? That’s probably not until at least 30 or so shows later! So yeah, to answer your question, it was shit.

6. What is your pre-performance ritual?

Sebastian: We get there on the venue’s timetable as early as possible, load in and then eat food about an hour before the show starts. We try to be relaxed the day of, avoid alcohol, maybe a beer or something right before we go on. Sometimes we prefer to be back-stage in zen-mode but we definitely enjoy seeing the other bands from the same bill performing.

Niall: I generally watch the other bands, maybe I’ll go grab something quick to eat. I will have a couple drinks and try to pretend I am not even at my own show. Makes it less distracting.

7. Electric or acoustic, and why?

Sebastian: Electric, because we like it louder and with more tonal possibilities. Also, acoustic can make certain guitar and keyboard progressions sound a little too…”precious,” if you know what I mean.

Niall: Electric, because you can do so much more with it. But I have a place in my heart for acoustic and had a phase where I’d write songs with acoustic in mind. That said, these days even electric guitar has taken a backseat to a rediscovery of bass. Am I allowed to admit that?

Niall: I’ve liked blues, rock, and folk music at times, but for some reason, country (which while a mix of those) just doesn’t work for me, though there are some great country vocalists out there. I used to love rap back in the day, when it was more about storytelling and intelligent wordplay. Though there are some good rappers under the radar still.

9. Who are your music idols? Why? Have you ever met them? If so, what happened?

Sebastian: I’ve had the privilege of making records with several vocalists and producers I’ve idolized, and it was great. Teachers and mentors are important, and then when you get to participate and help them improve their own project, it’s nuts. It makes the universe feel complete.

Niall: I don’t think I’ve ever had music “idols,” and I’d feel better off not meeting them anyway. Keeps them in that sort of awe-inspiring element. Plus who know how they’d be like in person. Musically if say Kurt Cobain, Prince, Ian Curtis, and Freddie Mercury met for instance, it would probably be a disaster.

10. Tell us about your creative process. How does the music come to you?

Niall: Inspiration comes from the oddest places, but usually in the night time was when I would think clearer in creativity. However, with this band it’s been much more formulaic. I will record or play a bunch of riffs for Sebastian, then he adds to it. Or he will have some outline tracks and I will add some secondary changes to the melody. It’s more a step by step approach than in past bands where songs would magically appear out of nowhere while jamming.

11. What’s your favorite movie? And why?

Sebastian and Bridget: Aliens, um…because it is Aliens?

12. What are the band’s favorite five songs? (list in order)

Niall: Do you mean my favorite Stereo Off songs? That always changes, but I currently like: Sunsetting, Ordinary Lives, Wolves, Hotel Mirror, Bad Friday. Three of those are off the upcoming EP.

13. The top five album/s you can’t live without? (list in order)

Niall: Like that desert island question… Five influential albums in my life, mostly older stuff even though I didn’t necessarily get into some of them till many years later. But I say, give me Ok Computer, The Clash, Young Team, The Low End Theory, Loveless. Those are not necessarily my top five albums, but are all great and are a variety of sounds/styles. After all, if I’m only listening to five albums on a desert island, might as well mix-tape it up with a bit of punk, post rock, indie, hip-hop, shoegaze.

14. What’s something that most people don’t know about you?

Sebastian: I went to private high-school on a need-based scholarship and I used to be a rapper.

Niall: Most things, you won’t find me on social media for instance.

15. What’s the best piece of advice you’ve ever heard?

Sebastian: “To defy convention, you must learn it.”

Niall: Sort yourself out first before helping/blaming anyone else.

Niall: Travelling (except maybe work-related travelling, which doesn’t count). New places I’ve never been to. Having more time to do what I want to do.

17. What’s your strangest phobia or superstition?

18. What’s your favorite hotel and city to visit? Why?

Sebastian: I like LA, but the Hudson Hotel in NY has a nostalgia to it.

Sebastian: Bridget and I were in Cezanne’s garden in France, eating ham and butter sandwiches with rosé and it was beautiful out.

Niall: Indian food in various parts of India! Just take one bit of advice to avoid illness. Be a vegetarian.

20. Best experience as a band?

Sebastian: Our first live show, our first road gig together, our first EP, our first interviews, our first video…there have been a lot of good memories in a short amount of time so far.

Niall: I really liked how the video for Bullet Time went down and was well received, yet 100% DIY. It was music, video, storyline, production, done each part with loads of close friends coming together, etc. That was so many things I wanted to do in one place with people I wanted there with me.

21. Tell us a little about your upcoming EP, what we can expect, and where to listen.

Sebastian: This one is for the Summer, it’s got an air of the sea in it. It’s also an evolution of us so we are thinking of calling it III…our third EP, there are three members in the band, and this is the first where we wrote it iteratively as we went on a theme. So the first concept disc for us as a band, as opposed to choosing separates, and the sound is different with more electronic overtones.

Niall: It will be out in the next few weeks and available on iTunes, Spotify, Amazon and all the usual suspects. The first two EPs are available already at:

AND you can hear them and outtakes on the http://www.stereooff.com site, too.

22. Last, but not least, is there anything you want to pitch, promote or discuss? (Be creative or influential!)

Sebastian: We’d love it if you check out our recent video for “The Things We Do” from the previous EP The Long Hot Winter. Also – check out our film friends including Deviant Children Productions, whom we just scored a zombie short for, and Dead Red Eyes who have done our first two videos. Please also check out Deneka Peniston, who has done most of our photography so far.

Niall: We try to put the videos where we were in the soundtracks for (as per Sebastian’s list above), as well as our two music videos on our YouTube channel.

And in September we will be releasing a new single, so stay tuned indeed. 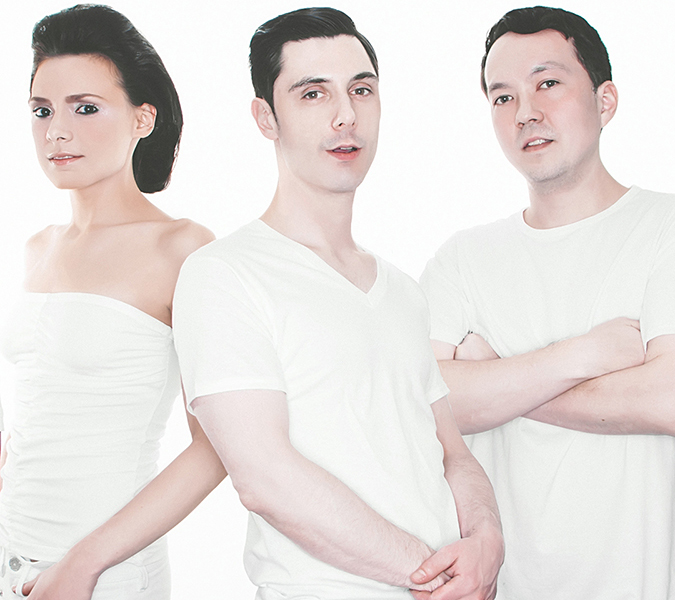 Images Courtesy of Stereo Off