It all started with a handbag. Ann Lawrence wanted to buy a new handbag, and as she’s a successful professional woman in a male-dominated field (a partner at DLA Piper,  a global law firm), she thought she’d try and help out a woman-owned business. She found, to her great surprise, that information about what businesses were led by women was very hard to find. She searched around for rather a long time, she asked other people in case she was missing something, and finally concluded that the information she sought just didn’t exist.

So, being an enterprising sort, she sought to create what she’d been looking for. Last year, Ann and a small team of professional women launched Pink51.

They created a new, first-of-its kind marketplace to define “Pink” businesses, shop and support women-led businesses, and give back to charities working to bring success to women and girls… Pink51 is for small and large companies but only if they meet one of the following criteria 1) are at least 50% owned by women; 2) have female board membership of 20% or more; or 3) have a woman as CEO (or a minimum of two female senior executives). A fairly simple concept, and one that seems obvious in retrospect: it hadn’t been done before. And their aim is to change the world.

As Ann explained, women influence 85% of consumer spending in the U.S. And by providing a destination where women can choose to shop with companies that support, promote, empower, and value women, she and her team believe that female economic power can be harnessed and leveraged to support women on all levels: “from daughters on the playground to moms in the boardroom, from the home office to the corporate office, from the small corner store to the largest publicly traded companies.” They have confidence that empowering women to succeed economically will change the world for the better, and that women can use their purchasing power to help other women and their communities to achieve even greater success.

With each purchase through their website, Pink51 makes a donation to charities that support women’s and girls’ economic success. And each such purchase informs the business world that its customers support women in leadership roles.

As Ann is in sunny southern California, and I am in the frozen northeast, we spoke on the telephone, and are hoping to catch up in person when our busy lives permit. Here’s what we discussed (edited and condensed for clarity): 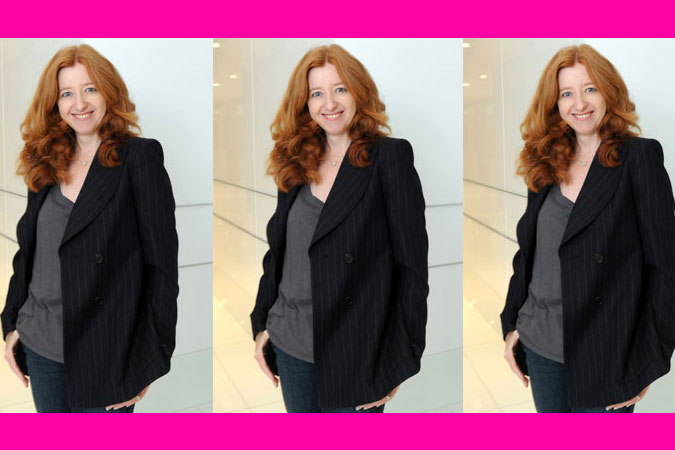 Is Pink51 a non-profit? How does your business model work?

It’s definitely a passion project, but we’re capitalists!   We really want to make shopping more transparent. In a way it is a bit like the green movement. It used to be, when you went grocery shopping, if you wanted to know where your apples came from, there was no way to find out. Then Whole Foods was disruptive…they started telling you everything about the origin of your apples and it allowed the consumer to make choices with more information. And now, everywhere, local grocery stores, restaurants, provide people with information that they never did before.

Why hasn’t your idea been done before? Why are women-led businesses not already as successful as they should be?

I think one reason that women aren’t necessarily rising to the top is that businesses don’t know that customers care about this issue. A lot of products, even products in industries that sell to women (like the fashion business, and the beauty industry), are oftentimes developed and marketed almost solely by men. Marketing people are something like 97% percent men. When we tell companies that we care about this, we are giving shoppers the ability to make change. Together, we have a powerful voice.

How can companies get involved?

For businesses that are women-owned or women-led, it is free to join. Businesses pay if they want to advertise through the site.

Have you been successful so far?

We have over 10,000 Facebook followers and a growing following on Twitter and Instagram. When we launched last year, we had just a handful of businesses, and now we are up to over 500. Because we have had so much growth, we are revamping it to make it more interactive. We haven’t yet made a big push for customers, as we’ve been focusing on getting businesses signed up and getting feedback from our community. But women business owners and women executives are also shoppers, so shoppers have been finding us.

We have strategic partners, like the National Association of Women Business Owners and Springboard Enterprises and YPO’s WYN Women in Business Network. They’re on board with what we’re doing and it is amazing for our little startup to have such amazing partners supporting our mission.

We’re also beginning to get into business to business services; there’s a demand out there.

How can individuals get involved?

Anyone can sign up to shop through Pink51, and those who do can elect which charities to support with their purchases.

What charities are you supporting with Pink51? How did you choose them?

Marta Ferro, our Chief Executive Officer, does consulting for non-profits, and she is deep in the non-profit world, so we are supporting some of the ones that she thinks are doing the most good. It was important for us to support charities both domestic and international, and charities that want to engage in economic empowerment.

We support Girls, Inc. (to help the generations that come after we do), the National Partnership for Women and Families (which is a good and strong organization), and Women’s Earth Alliance  (because environmental issues are women’s issues). We may decide to support additional charities in the future. We also have a lot of women-led charities which have joined the site so people can gain more transparency about their charity dollars as well.

Are you concerned about getting involved in any divisive social or political issues?

It is a core cultural tenet of ours to be positive. There is so much relentless negativity and we do not want to contribute to it. We are not interested in calling out bad actions and being negative, but are focused on acting together to make positive change.

Having a child. I didn’t plan to have children. I left my first law firm job after eight years, and I’d been married for ten years, before I had him. I thought I didn’t have time. I was very married to my career. It was a huge risk, but it was a huge reward.

Busy does not equal productive. I learned that from working with Robert K. Cooper,  who is a neuroscientist, and has written some good books, and works with big companies giving them leadership advice. He has big insights and has been very valuable to me.

Is there a book everyone should read?

I recently met Leslie Morgan Steiner, who wrote Mommy Wars: Stay at Home and Career Moms Face Off on Their Choices, Their Lives, Their Families. She had some phenomenal insights, but I haven’t read the book yet. I plan to read it soon. One I recommend is Give and Take by Adam Grant. I think they need to collaborate on a book together.

Since you are doing so much to empower women in business, have there been any inspirational women in your life?

This whole experience–as someone who has worked in a male-dominated field, having women come together like this, the team of women building this website has been so inspiring. Everyone has put their heart and soul into it, with such optimism. Every one of us has a full time job, and yet everyone jumped in.

Also, Ellenore Angelidis: she’s the Chief Diversity Officer at Amazon. I met her at a women’s summit in Chicago, we sat at a table together, and she just blew me away with her authenticity, her ability to be present, and how she just owned the dialogue for why diversity is critical to advancement and disruption. We’ve become friends and she’s amazing.

When I first came to my current law firm, I joined a women’s group, and it really changed my ideas. In many law firms, women’s groups and diversity initiatives are just about being good corporate citizens, but here at DLA Piper, I’m happy to say that a women’s group is good business, and what we’re doing makes my firm a better company. I feel great support here.

I didn’t focus on women’s issues in the first decade of my career, and I don’t know what changed? The world? Me? Both probably. I’m now much more open to reach out for help, to know it’s out there, to be able to see it and accept it, and offer it. I think I was lulled into a sense of thinking that the problem of women in leadership was already fixed and just fine.

I never see movies any more. But an old one I like is Tucker: The Man and His Dream.

What is the funniest thing that happened to you this week?

The CEO of a large company was looking for an attorney to help him with a project, and we e-mailed back and forth a few times before we met in person. After we met, and we were talking for a minute, he just seemed very uncomfortable, and I couldn’t figure out why. He told me he felt badly, but he was confused, he’d really meant to find someone senior to work with, not someone right out of law school. I had to explain that I was senior, I’d been practicing for 16 years, and I wasn’t 25!

So, were you able to help him with his problem, once you got that settled?

Yes, I think so. He introduced me to his Board the following week and we were hired. The world works when we put stereotypes aside and focus on what is important.

The only thing better than that is that you close the deal, and when you go out for a celebratory drink with him, you get carded at the bar.

Yes, that would be great!

I’m not a big person for regrets. Instead, I’ll tell you what I’d do again and not change a thing: I’d go through childbirth again. Wash, rinse, and repeat: bringing a tiny human being home from the hospital. Of course, I was panicked and scared! I had more confidence with my second child. The night I brought my daughter home was the best night of sleep in my life. The massive shift having children made to my humanity: I didn’t know that I had this capacity to change. But having children was an amazing, life-changing moment. My kids are amazing. I’d live that again if I could.

At some point, are you going to quit your day job and focus on Pink51 entirely?

Well, I think there are a thousand people I’d like to hire before me. I want to give women economic power, I want to help women in business, I would like to hire some great women to work at Pink51 as we grow. Down the line…well, maybe I’d be the 1,001st hire.

Yes! Check out Pink51: and shop with a purpose! 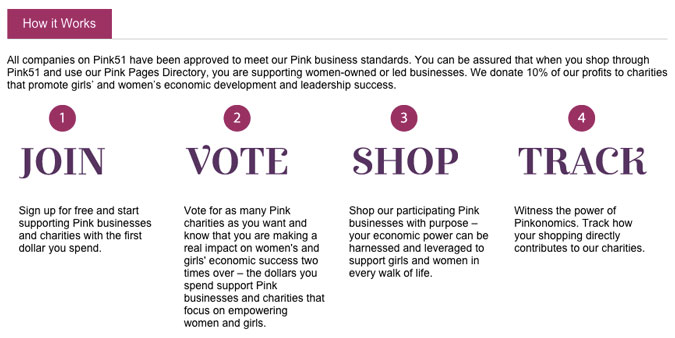 Graphics and images courtesy of Pink51