THIS DAY IN HISTORY… AUGUST 1

For months the British Navy had been in search of a French expeditionary force in the Mediterranean Sea. Napoleon Bonaparte planned to conquer Egypt in a long range attempt to take over British India. The French fleet was anchored along the coast of Egypt in a strong defensive position when the British fleet, commanded by Admiral Horatio Nelson, discovered them. Nelson devised a daring battle plan with British ships sailing between the shore and the French fleet while also attacking from the sea. The battle began late in the day and continued into darkness. While some of Nelson’s ships were heavily damaged the French fleet was mostly captured with only a few ships escaping. The battle left Napoleon stranded and he eventually had to abandon Egypt and plans of further conquests.

Horatio Nelson became a huge hero in England and remains so to this day. In addition to being an inspiration to such writers as Patrick O’Brien and C.S. Forester.

There was a large population of free African-Americans living in south Philadelphia. They competed for the same bottom rung of the ladder jobs with recently arrived Irish immigrants. On August 1st about 1,000 Blacks paraded to celebrate the eighth anniversary of the abolition of slavery in West Indies. An Irish mob attacked them and three days of rioting followed. The mob burned African-American homes and was intent on reaching the home of Black leader Robert Purvis. He and his house were saved through the intervention of a Catholic priest. The mayor of Philadelphia refused to bring charges against any of the leaders of the rioters.

Racism as a strategy. As long as it exists those on the top rung of the ladder have less to worry about.

1933 – Death penalty in Germany for anti-fascists.

This was listed as an event in onthisday.com but in doing research I was unable to find any specific facts about it. However given that the Nazis were the ultimate fascists and proceeded to kill millions, it certainly seems plausible. So this brings me to Antifa. Mention that word and hands are thrown up in horror. Fascism is a repressive form of government that controls the economy and society in whatever means necessary and eliminates any opposition. Antifa stands opposed to fascism. I hold that in higher regard than say, being Pro-fa.

Explorer, soldiers, Indian agent. Clark was an officer in the U.S. Army and fought in Indian Wars in Kentucky. While in the army he met Meriwether Lewis. When Lewis, selected by President Jefferson to lead an expedition to explore the Pacific Northwest, asked Clark to share command with him, he accepted. An excellent mapmaker, Clark produced maps of the territory they traversed on their two year journey to the Oregon coast and back. Clark was a slaveholder and had a reputation for harsh treatment of his slaves. He brought a slave, York, on the expedition with him. After the expedition he remained in the army and served in the War of 1812. After the war he became Superintendent of Indian Affairs west of the Mississippi. Although he was said to be fair with Native Americans and sympathetic to their culture and plight, some said at the time too sympathetic, he also complied with President Andrew Jackson’s Indian removal policy, including extermination. When Sacagawea, who was an Indian woman who accompanied the Lewis and Clark Expedition and served as an interpreter, died, Clark took care of her children. He also allegedly had a Nez Perce son, conceived on the expedition. Clark married twice, one wife dying, and had eight children. He died in St. Louis in 1838 at age 68.

Like so many famous figures in American history, the real man, while still accomplished and important, was more complicated.

Soldier, lawyer. Travis was commander of the Alamo when it fell under the onslaught of Mexican General Santa Anna. He was raised in Alabama and at age 18 became a teacher. Within a year he married one of his 16 year old students and had a child. He studied law and opened a practice and also published a newspaper. He did poorly at both and went far into debt. A court ordered him to be arrested. Promising his wife, pregnant with a second child, he’d send money (he never did) he fled to Texas. There he did better and set up a law practice and helped organize a militia to oppose Mexican rule. He was commissioned a Lt. Colonel in the new Texian army. When first ordered to reinforce the Alamo he considered disobeying. He wrote to his commander: “I am unwilling to risk my reputation … by going off into the enemy’s country with such little means, so few men, and with them so badly equipped.” However when Jim Bowie arrived at the Alamo with 30 men Travis followed with another 18. The men elected Bowie as commander angering Travis but when Bowie fell ill Travis took over. He was 26-years-old and in command of approximately 200 men when on March 6th, 1836, after a 13 day siege by several thousand Mexican soldiers, he died along with the entire Alamo garrison.

Ran out on his debts, abandoned a pregnant wife and child, yet is viewed as a hero, remembered for one act rather than the sum total.

Musician. Singer, songwriter, guitarist, Garcia is best known for his role with the Grateful Dead. Growing up in California with a single mom, his father having died in a drowning accident, he was a rebellious youth. He was already using drugs as a teenager and was introduced to music at the same time. He did a short stint in the army, receiving a general discharge for bad behavior. Throughout the early and middle sixties he began performing and met those who would form the nucleus of the Grateful Dead. The band stayed together for years and Garcia was on stage with them for 2,314 performances. The Grateful Dead came out of the drug induced psychedelic era of the Haight-Ashbury scene and lived at 710 Ashbury from 1966-1968. Garcia… died from a heart attack at a drug rehabilitation center in 1995.

They lived at 710 Ashbury…who knows, maybe I crossed paths with Jerry Garcia at some point during the Summer of Love. 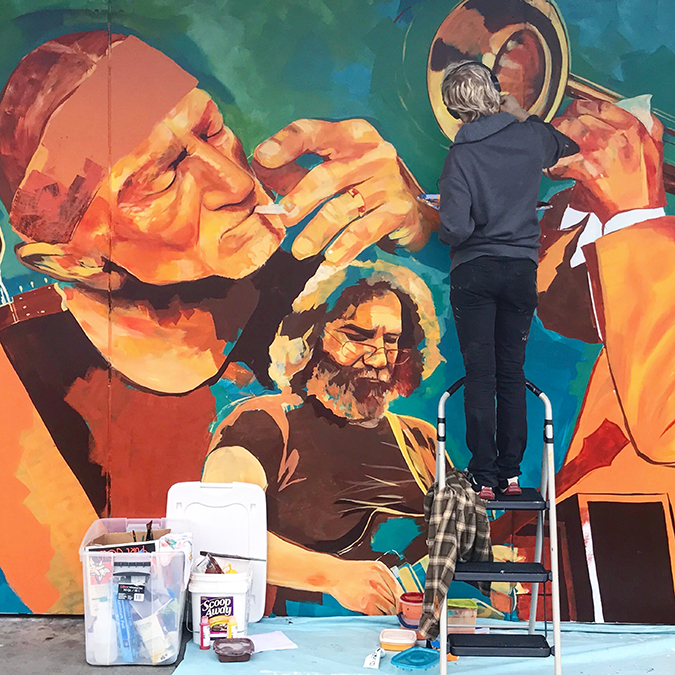