THIS DAY IN HISTORY… AUGUST 27

This pact renounced war as a way for nations to resolve disputes. The U.S., France, and Germany signed it on the 27th, and soon after many other nations followed suit. In all, sixty-two nations signed the agreement to end war. The pact was named after Secretary of State Frank Kellogg and French Foreign Minister Aristide Briand. Kellogg was a United States Senator from Minnesota before he became Secretary of State.

Ineffective, the pact did little to prevent the Second World War. It did however establish some legal bases that are still in place today, most notably “crimes against peace” which was used at the Nuremberg Trials to prosecute war criminals. It was also inspiration for the United Nations Charter.

If a failed experiment, it nevertheless was a noble idea. It has been widely ridiculed…but for what, its idealism? In the minds of some, justifying the need for war takes precedent over any search for peaceful solutions. The war drums always maintain a steady beat.

The country had been retreating in defeat for two years, and now devastated by two atomic bombs, finally capitulated. The formal signing of surrender would take place on September 2nd.

My uncle, Wilmar “Buck” Jenneke was among those first troops to land in Japan. He came ashore at Nagasaki. A few short weeks earlier he had been in Hawaii. My father was stationed in the army there also. They managed to get together one evening for a few drinks…or more than a few. Their last words to one another that night were, “See you in Tokyo.” Aboard different ships, they set sail for Japan. Dad told me he was about halfway across the Pacific when the bomb was dropped on Hiroshima. Dad was in artillery and it must have been decided they no longer would be needed. His ship did a u-turn, headed back to Hawaii, and his war was over. Uncle Buck continued onward, to Nagasaki, where the second bomb had been dropped.

At a family gathering one time, I asked him about it. He said, “Gary, you can’t imagine the devastation, there was absolutely nothing left.” Buck, a robust, healthy man, lived into his nineties. From his army outfit he was one of the rare, and lucky, ones. As the years went by, many in his unit suffered from various illnesses and different forms of cancer. The radiation they marched through on their entry into Nagasaki was an unknown, and deadly, enemy. There’s a line about the Vietnam War and Agent Orange that applies here also. “I got killed in [Vietnam] and didn’t even know it.”

After winning enough delegates in the primaries, Barack Obama was officially nominated at the Democratic National Convention for president. Obama went on to win the presidential election and become the first African-American president of the United States.

I thought it was a new beginning for America, a positive step forward. Given the current backlash and rise of white supremacy, boy was I wrong. It’s Tuesday as I write these words, and when I’m finished I’m off to teach ESL to immigrants from Somalia. A needed antidote against the hate and division that now poses as leadership.

Writer. Dreiser’s best known works are “Sister Carrie” and “An American Tragedy.” He faced criticism because sometimes his characters lacked proper moral fiber, and he also depicted sexual promiscuity, so he was in constant conflict with censorship. Politically, he was a radical and he defended those he believed fell victim to legal injustice. These included Emma Goldman, Sacco and Vanzetti, and Frank Little, a leader in the IWW who was lynched. A committed Socialist, he eventually joined the Communist Party in 1945, several months before his death. If he had lived long enough, I’m sure he would have been dragged before the HUAC.

When I was a young man I read many novels by great American novelists from earlier eras. Thomas Wolfe, Sinclair Lewis, John Dos Passos, William Faulkner, but I missed Theodore Dreiser. Don’t know if I’ll put him on my list or not. I no longer have that same energy.

Economist. Heller served under Presidents Kennedy and Johnson as chairman of the Council of Economic Advisers. Among his suggestions were tax cuts to stimulate the economy and Johnson’s War on Poverty. Earlier in his career, in 1947, Heller helped create the Marshall Plan which restored West Germany’s economy after the war. He resigned from the government because LBJ escalated the Vietnam War without a corresponding tax increase. He then joined the staff at the University of Minnesota, heading the Department of Economics and building it into a highly respected department. Heller died in 1987 and the University renamed a building after him.

Economics was my most difficult subject in college. I was struggling to even pass the course when we had a major test. To answer one question we had to show our calculations. I knew there was one of two ways to go, so I guessed. The professor was walking through the row of desks, looking at the students’ work. He stopped, looked over my shoulder, and then blurted in frustration, “No, no, no.” I quickly erased what I had and went the other way. I passed the test and the class but there was no career in Economics in my future.

Wife of Ray Kroc. Ray Kroc had already wrested control of the McDonald fast food hamburger franchise from the McDonald brothers when Joan became his third wife. She was playing in a piano bar in St. Paul, Minnesota when Ray, himself a pianist, first met her. He was alcoholic and ill-tempered and the marriage was difficult. She even filed for divorce one time, but stuck it out and when he died in 1984, she inherited his vast fortune. She immediately began giving it away: philanthropy became her calling. Ray, a conservative, would have been horrified for she gave mainly to liberal causes. Although her giving could be capricious, based on something she read or someone she met, she also supported such causes as AIDS research and the No-nukes program, was a huge contributor to the Democratic Party, and posthumously left $234 million to NPR. Joan Kroc died from brain cancer in 2003.

McDonald’s is a major contributor to the current obesity epidemic. That so much of the profits gained going to good causes is a special irony. Despite all the Joan Kroc contributions that would never have been made, would the world have been better off without McDonald’s?

* Old McDonald Signage (Lead-In Image) – tishomir / Shutterstock.com – “Downey, California – May 28, 2018: Logo of the McDonald’s in Downey, California. It is almost unchanged in appearance since it opened in 1953. It is the oldest operating McDonald’s restaurant.” 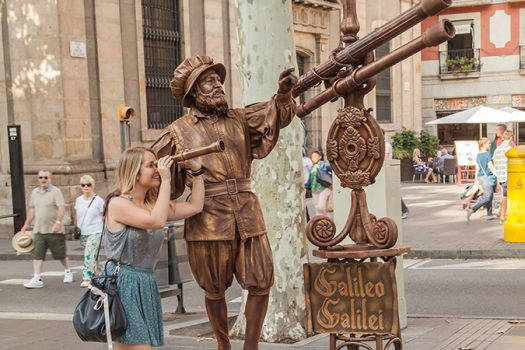